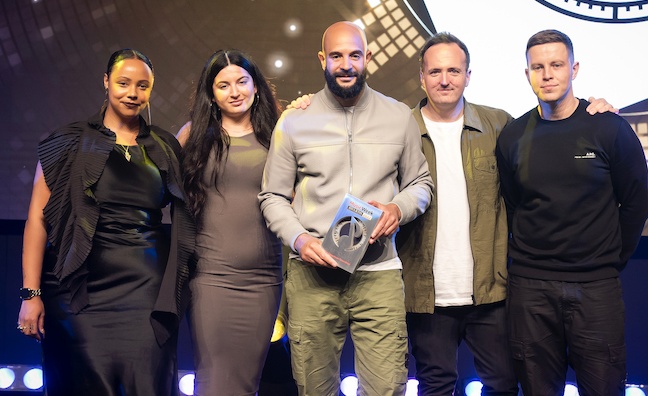 Neighbourhood followed up their 2019 Music Week Award, when Scarrs and co-founder Jack Foster were named managers of the year in recognition of their work with Dave, with their inaugural win in the independent label category last month.

The company’s label arm is headed up by general manager James Walsh, who joined Scarrs and the team on stage to accept the trophy.

In his speech, Scarrs paid tribute to SBTV founder Jamal Edwards, in the wake of emotional deliveries from the executive’s mother Brenda and SBTV MD Isaac Densu, who accepted a special award on the night.

“It’s deeper for me with Jamal,” Scarrs told Music Week backstage. “We lived a stone’s throw away from each other across the A40. I’ve known that guy… I can’t even remember for how long, just so long. I can’t even really find the words. He’s a West London hero. I grew up there, he grew up there and to see what he achieved, to see the legacy he’s left…”

Dave spoke movingly about Edwards in the wake of his passing on stage at the O2 Arena on his UK tour earlier this year, and Scarrs expressed his gratitude for the support of SBTV.

“It’s the fact that, not only Dave, but every single one of my artists has come through SBTV,” he said. “Tinchy Stryder, Devlin, whose F64 is legendary, Angel, Cleo Sol… Everyone that I’ve worked with has come through him, he’s touched all of them. God bless him.” 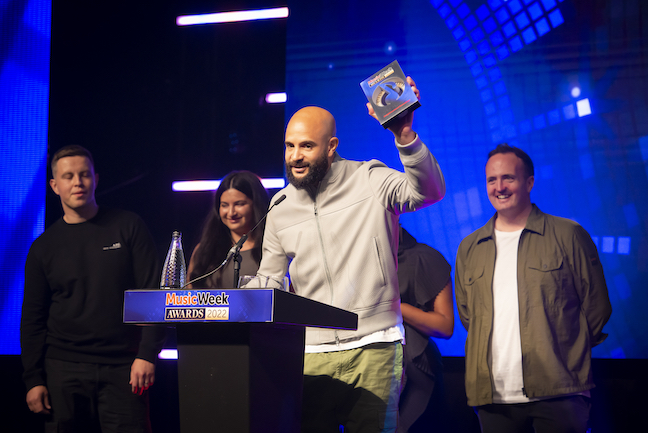 On an emotional night, Scarrs said he was overwhelmed to win the award.

“My message for Dave is, thank you for being absolutely brilliant and just the most ambitious guy that I’ve ever met, thank you,” he said.

Reflecting on Neighbourhood’s Music Week Awards double he said: “Dave is an exceptionally talented and focused artist, so that is half the battle. We’ve been very lucky with incredible people around us supporting us doing the other side of the coin. I feel thankful, super-shocked.”

“I feel surprised, excited, but thankful is the big thing, because we’re a small team,” he said. “We’re a young label, we’ve only been going since 2017 and only been releasing since 2018. Our first release was Funky Friday, which went to No.1. Maybe now we’ve proven ourselves a little more after We’re All Alone In This Together.”

Dave’s success has been a landmark story for Neighbourhood, which is also working with Sir Spyro and emerging talents Meekz and Kamal. As well as pointing to Dave's UK No.1 album We’re All Alone In This Together (264,390 sales, OCC), Walsh highlighted this year’s arena tour that saw 120,000 tickets sold.

“Since he released the album, he’s gone on to have a No.1 single for four weeks with Starlight, the longest-running UK rap No.1,” said Walsh. “I was confident we’d go to No.1, but obviously I’m a big fan of his work so I thought it was definitely achievable. As Benny said on stage, this is because of all the artists in UK rap who have come before Dave and broken down doors. And hopefully Dave is breaking down doors for the next generation. Look at what Central Cee and Digga D have done [with their recent mixtapes], it’s an exciting time for UK rap.”

“We’re a small team but we’re able to achieve big things because of everybody around us who supports us,” he said. “It all comes back to the music and in our eyes, Dave is one of the greatest artists ever. We’re very thankful.”

Walsh said that Dave’s growth as an artist means that the Neighbourhood team have to follow suit and step up along with him.

“It’s no coincidence that his bar of perfection is so high,” he said. “The two singles he’s had go to No.1, Funky Friday and Starlight, are both songs that he not only wrote, but produced. It goes to show how talented he is, his bar is just so high and that brings us up, makes us work harder and makes us want to be better at our jobs. That has shown over the last 12 months.”

Read Music Week’s 2020 interview with Scarrs and Foster here and catch up on all the winners at this year’s Music Week Awards here.