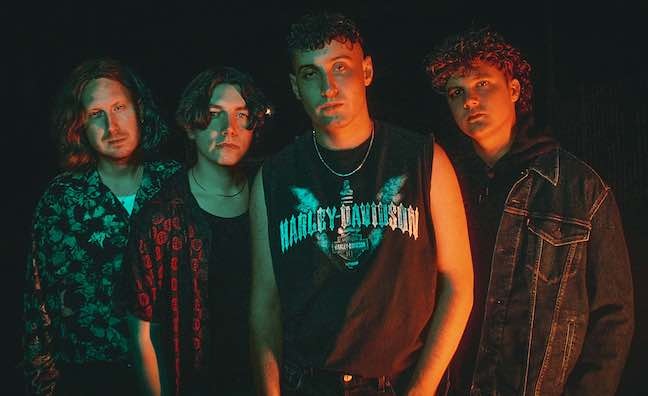 Following their Top 3 breakthrough in 2020 with debut album Open Up Your Head, Sea Girls are back with the follow-up, Homesick, on March 25.

The band have dropped new single Lonely, which was premiered last night as Hottest Record on BBC Radio 1 by Jack Saunders, sitting in for Clara Amfo on the Future Sounds Show. The video stars JoJo Macari (Netflix’s Sex Education & The Irregulars).

Sea Girls have also announced their biggest headline shows to date with The Hometown Tour. Kicking off mid-November, they will play seven gigs at venues including London's Alexandra Palace (November 25) and Manchester, O2 Victoria Warehouse (26). Tickets will be available on pre-sale from 10am on Tuesday, February 22, and general sale 10am, Friday, February 25.

It follows a run of O2 Academy shows last October, as the band who broke in lockdown were finally able to play live.

“Sea Girls were one of the few guitar bands that continued to grow throughout the pandemic,” said SJM Concerts promoter Luke Temple. “Despite missing touring and key festivals during Covid, we saw the demand for them was very high as soon as their tour went on sale, resulting in a complete sold out tour in October 2021.”

“The band sold out Glasgow Barrowland [1,900 capacity] at the end of 2021, and feedback was incredible,” said DF Concerts owner Dave McGeachan. “Even more impressive as Scotland still had probably more restrictions in place than most of the UK at the time.

“I think there is big demand to see Sea Girls live at the moment, and we are going into a bigger venue this time around, Glasgow O2 Academy [2,550 capacity]. We had them play TRNSMT last year and I thought their set was one of the standouts of the whole weekend, you can easily forget how many great songs they have until you see them play live.”

An EU headline tour will launch next month, followed by UK indie record store shows in May and then festivals in the summer.

What are your expectations for the second album from Sea Girls?

Karen Dagg, head of marketing, Polydor: “It’s extremely exciting to be launching our second record with Sea Girls. The album is a real progression musically and they’ve really pushed themselves as artists to deliver some incredible songs. The band have navigated the challenges of the pandemic climate and worked consistently on engaging with their fans and embracing new channels. Announcing such an impressive tour off the back of last year’s sold out O2 Academy Brixton is a huge look for any artist, and a testament to all the groundwork they’ve put in over the last few years.”

What are the opportunities for Sea Girls in terms of streaming and TikTok, as well as physical sales?

KD: “Hopefully, we’re breaking down some of the stereotypes around certain genres being confined to particular spaces. Physical sales and a comprehensive D2C strategy will always have a place within an album campaign, but in terms of long-term audience growth we know the importance of being strategic with streaming and growing audiences on all channels including TikTok. Sea Girls’ TikTok has had a 47% growth in followers during this campaign, so we know there are huge opportunities to be had and their confidence on the platform continues to grow.”

How strong is the band's live business. How have they been able to build to this level despite pandemic?

Rachel Chapman, Radiate Management: “It’s great when a band comes along that are equally as hard-working as they are prolific musically. It has paid dividends in growing their following over the last two years. We’ve spent a lot of time over this period changing and adapting the band’s business from the impact of the live sector shutting down. With many traditional routes to market not available we realised pretty quickly, like a lot of other artists, we needed to diversify the band’s core focus so as not to lose the momentum midway through their debut album campaign.

“We took the band’s live connection with their fans online with intimate moments that we’d not had the time to explore previously. Aftershow hangouts with fans were replaced with Zoom sessions, group chats, calls and Netflix Parties. It was important to the band to stay connected with their fans in lockdown whilst writing and recording their second album through 2021. With the new album coming out next month, the latest single Lonely a Radio 1 Hottest Record In The World and the announcement of the band’s biggest tour to date this November including a show at Alexandra Palace, that is further testament to Sea Girls’ fans and the songs that the band record. All credit to them for grasping the opportunities and having the right attitude to succeed.”

Lola Mitchell, live agent, 13 Artists: “Sea Girls have a great live business, their upgraded and sold-out tour is testament to that. The October 2021 tour included a triumphant sold-out Brixton Academy, the crowd were singing every single word from the moment the band stepped on the stage, it really was a wonderful sight to see and hear. The band have toured solidly, building an incredibly loyal fanbase – the connection Sea Girls have with their fans really is quite special.

Sea Girls know how to write a banger!

“The Q4 tour in 2022 sees the band jump up to Alexandra Palace in London, that’s an incredible achievement. I never take it for granted that I get to be on this journey, and to see the growth from that first play at The Islington all those years ago. Throughout the pandemic the band continued to grow through their online presence and support from radio. A continuous stream of new music, Sea Girls know how to write a banger!”

Maz Tuppuni, live promoter, Communion Music: “Sea Girls have cemented themselves as one of the biggest breakthrough UK guitar bands over the past couple of years. The band headlined Brixton Academy last year which was sold out way in advance and they’ll be performing at Alexandra Palace (10,000 tickets) later this year. Not many guitar bands manage to get to that level and this hasn’t been an overnight success story. I booked them for one of their first ever London shows at the Communion Club Night in 2016 at the Notting Hill Arts Club. They have been building their live audience ever since, supported brilliantly by the team at 13 with key support tours and festival plays.

“They’ve been able to build during the pandemic through support on DSPs and radio, they also have an incredibly engaged fanbase. As a promoter, you can always tell how engaged the fans are. Are they only singing along to one song? Do they only know the singles? Within the first 25 minutes of the Brixton show, it was pretty evident that everyone knew the words to every song.”

Steve Tilley, live promoter, Kilimanjaro Live: “Sea Girls’ live business is a classic example of building a loyal fanbase show by show, song by song. They’ve risen to lead the new generation of UK guitar bands with a ridiculous work ethic combined with a set list that already feels like ’greatest hits’ and just gets better and better with each new release.

“Despite being robbed of key festival moments by the pandemic, they’ve plugged that gap by staying in touch with their fans online, talking to them daily and keeping interest levels constant throughout the time that they were not able to play live. By the time they could perform, the atmosphere at both shows and festivals has been electric with euphoric sing-a-longs from start to finish, further fuelling demand to see a band, who I should also add are absolutely brilliant live.”

What’s the demand for tickets in 2022 - and what are their festival plans?

Lola Mitchell: “Sea Girls have a solid summer festival run in the UK for 2022, with prominent slots at Isle Of Wight, Live At Leeds, Neck of The Woods, Truck, Y Not and Kendal. Their festival sets are always high energy and well received. Some highlights over the years for me have been their main stage slot at Community Festival supporting The Kooks, and their Reading/Leeds sets along with NBHD Weekender and TRNSMT. The demand for Sea Girls is very strong, the outstores we just put on all sold out very quickly. I am confident Sea Girls will have a very successful 2022 and beyond.”

Maz Tuppuni: “The band have sold out their album in-store shows which is a good indication that demand for the band is high. Also, it is very rare for us as promoters to go up with an Alexandra Palace show unless the whole team is confident that we can do the business and sell the show out. We also know how good this band are live. The fact that they are going to play in front of hundreds of thousands of people this summer with great slots at Y Not, Kendal and Isle Of Wight means the band will inevitably pick up more steam this summer ahead of their Alexandra Palace show.”

What are the global touring opportunities?

Rachel Chapman: “We were lucky to tour the US in December 2019 and Europe in January 2021 before the pandemic locked down. 2022 is starting to catch up now and is looking a lot more positive with the band’s European tour rescheduled and a new extensive US tour planned for September/October 2022. The team have a robust plan moving for Q3 and Q4 and into 2023.”

Jeff Krones/Bobby Cory, CAA USA: “The demand for Sea Girls has grown during this unprecedented time. They are one of the few acts we’ve seen take steps forward during a time when they couldn’t be physically here. We’re excited to headline in the fall in bigger rooms and to tie in some key festivals. Their commitment to break worldwide is clear and fans seem eager to come see them.”