Slipknot, Bring Me The Horizon and Download Festival among Heavy Music Awards winners 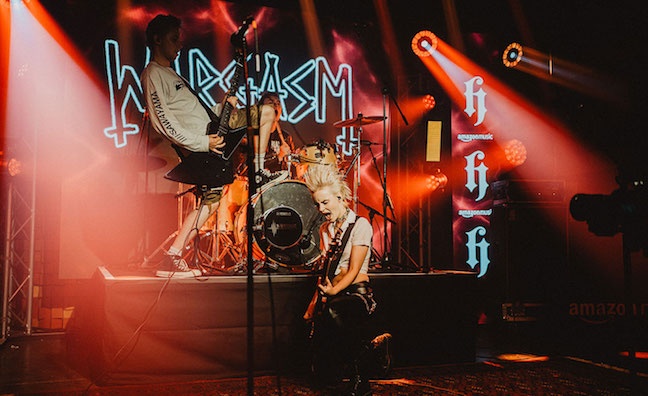 The fourth annual Heavy Music Awards, presented by Amazon Music, saw honours for the likes of Slipknot, Bring Me The Horizon, Don Broco and Rammstein, as well as Download Festival.

Due to take place at London's O2 Forum Kentish Town, the awards went virtual in light of the pandemic and were streamed live on the Amazon Music UK Twitch channel. Featuring a live interactive pre-show hosted by Kerrang! Radio presenters Sophie K and Jon Mahon, the event saw live performances from the studios of AfterLive Music by The Hunna, Holding Absence, Heart Of A Coward, Wargasm, Coldbones and Hawxx.

Slipknot were double winners, taking home Best International Band and Best Album for their 2019 LP We Are Not Your Kind, while Bring Me The Horizon became the first act to pick up Best UK Band two years in a row.

Rammstein were named Best Live Band following their series of stadium shows in 2019 while, in the new Best Video category for 2020, Don Broco landed their first HMA for Action.

Fingers crossed we're going to be back next year, bigger and stronger than we've always been

Live Nation's Download Festival took the Best Festival award for the second time in four years. Promoter Andy Copping said: “It really means a lot to us. A very bizarre year this year, of course, with no festival taking place, but fingers crossed we’re going to be back next year, bigger and stronger than we’ve always been.”

Meanwhile, the H - a special award recognising exceptional positive contribution to the heavy music scene - was given to Dom Frazer and Space, the husband and wife team behind Guildford’s Boileroom venue.

More than 600 invited industry insiders nominated their favourites for the HMA20 to create the finalists’ shortlists, with over 150,000 votes cast from 150-plus countries to decide the winners.

BEST ALBUM Presented by Amazon Music
Slipknot, We Are Not Your Kind (Roadrunner Records/Produced by Greg Fidelman)