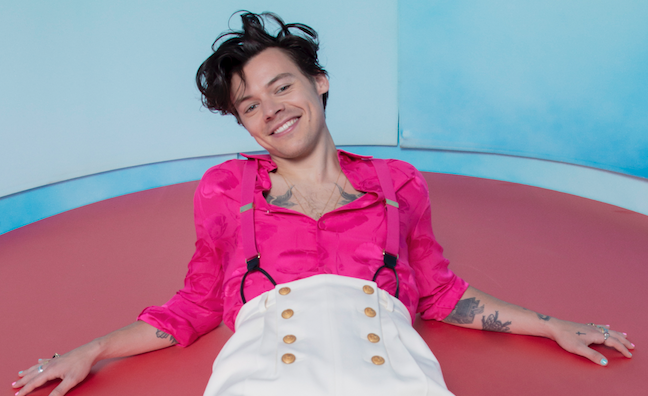 Harry Styles has told Music Week the story behind his “mantra”, Treat People With Kindness.

Styles releases his second album Fine Line this week and stars on the cover of our new issue, out now.

Treat People With Kindness became something of a slogan for Styles during his arena tour in 2018, and what started as a message on a badge on his guitar strap quickly caught on.

“It was a pin I had on my guitar strap and we made T-shirts for it, then I saw a lot of t-shirts around,” said the singer. “I’d be driving or something and see someone in one and I started feeling like, ‘Oh this is a bit of a thing.’”

All of which gave Styles the idea to write a song for the slogan, which he now calls his “mantra”.

“I had an idea of writing a song to go with it and it turned into a tribute, it’s just really fun,” he said.

Treat People With Kindness was written with Jeff Bhasker and Ilsey Juber and was one of the last songs to come together for the album. It’s a big, brassy gospel sing-along and is the penultimate track on the album.

“When I first wrote it I wasn’t sure if I really liked it or really hated it, but as it was going on I was like, ‘Oh I really like this, this is really fun,’” said Styles, who took encouragement from a David Bowie interview clip when making the song.

“I’d seen this clip of David Bowie talking saying that you usually end up doing your best work when you feel like you can’t quite touch the bottom, and realising that the fact that it made me feel a little uncomfortable didn’t mean it was a bad song was big thing,” he explained.

Styles revealed that the backing singers were dancing in the vocal booth during recording, which made him look forward to playing the song on next year’s world tour, which kicks off in Birmingham in April. He said the meaning behind Treat People With Kindness is “universal”.

“Small changes end up making a big difference,” he said. “It’s about being a lot nicer to each other rather than, ‘Don’t do this, or don’t do that, not this yes that.’ It’s just saying, ‘Treat people with kindness,’ you know.”

The singer enjoys the fact that the idea for the song was generated organically on tour, and paid tribute to his fans for allowing him to feel the freedom to make it.

“A big part of the freedom that I felt making this record came from touring last time and the interaction with the fans,” he said. “When I was touring with One Direction, fans came to the show but it was for something bigger. The band felt bigger than us, so it felt like they came to see that thing. It never quite felt like, ‘Oh all these people are here for me.’”

Now, things have changed and Styles has realised that “fans want me make the music that I want to make and play the show that I’d like to play. People just want me to be myself and be authentic with them.”