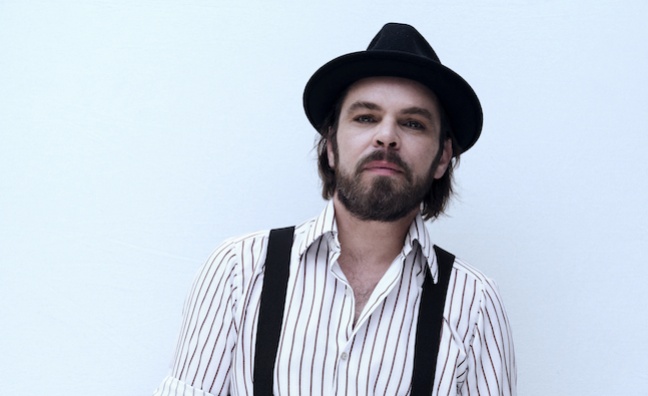 Supergrass legend Gaz Coombes is back with his fourth album, Turn The Car Around (out January 13).

Here, he talks to Music Week about the making of the autobiographical solo LP, recording in his garden and what it was like to sign a six-album deal when he was just 17...

What’s the meaning of the new album’s title, Turn The Car Around?

“It’s Russian dolls [laughs]! It started off as a lyric, then it became a song title and then... I really liked that sentiment. There are layers to it. It’s the idea of resetting and readdressing where we’ve gone too far. It can be applied to where we are in the world and it can be applied to something way more personal.”

Like your first three records, this new album was made at home. What is it about that environment that works for you?

“I’ve always loved recording at home; I did my solo albums in different rooms throughout the house. I started off doing my first record in my basement, for the next two I was up in a living room and then I was lucky enough to be able to build a studio in the garden for this one. Having that new space meant I was able to start playing with new sounds and slightly different approaches. When we had sessions they were kind of like mini-parties and I think that’s had a big impact on the sound of this record. People from my live band – Nick [Fowler] and Garo Nahoulakian who also play with Piney Gir – spent a lot of time here just making music with me, sometimes just playing along to a mad film on a projector, and other times it was just me writing and recording. Myself and Ian [Davenport] then co-produced it. Ever since [2015 album] Matador he’s been so good at reading my mind.”

Now you’re on your fourth record, you must feel fully established as a solo performer by now?

“It’s what I’ve hoped for all along, I guess, the idea of evolving through a creative world. I feel like there’s too much to explore to stay still. And all of those experiences I’ve had through my personal life, whether it’s having kids, personal tragedies or incredible moments, this feels like the place to process all that and put it into something.”

Your relationship with people at your label goes way back. What has made you stick with them?

“It’s really a relationship with a couple of guys who I’ve been with since the start of my solo career. Michael Roe started off at EMI Services on my first record and we hit it off straight away. And then there’s Jim Chancellor who has been around since Matador. I loved the period with Caroline International. It reminded me of Parlophone in the ’90s with Supergrass. So when Michael and Jim moved along with the rebrand to Virgin I said, ‘I’m coming with you.’ Or did they come with me? We just stuck with each other.”

You’ve been in the music industry since your teens. How would you sum up your experience so far?

“To kick off with Parlophone was pretty spectacular – a six-album deal on The Beatles’ label as a 17-year-old! Then, going solo, there was some uncertainty early on, but then I found the label services thing liberating. It got my relationship going with Michael and Jim at Caroline, which led to some of the best years I’ve had on a label.”