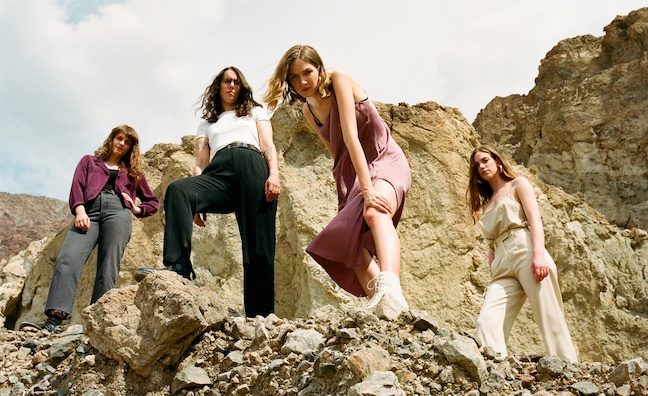 There have been murmurings of a rock revival, following the BRITs nomination for Bring Me The Horizon, the signing of Twin Atlantic to Virgin EMI and the debut album success of Sam Fender.

Indie four-piece The Big Moon might also be benefiting from the return of the genre, even if sophomore album Walking Like We Do goes bigger on the harmonies and synths – and not forgetting the homage to the Backstreet Boys in the video for Take A Piece.

“They are the most joyous band on the planet, it’s an incredible record,” said Fiction Records MD Jim Chancellor. “I’m absolutely delighted for them.”

Chancellor has previously spoken of his concerns about the plight of guitar music. But there are increasing signs that it can start to break through on streaming.

The Big Moon scored a No.19 entry for Walking Like We Do on Friday (January 17), a big improvement on the No.66 opening for 2017 debut Love In The 4th Dimension. The new record had first week sales of 3,456 (14% from streams), according to the Official Charts Company.

The band earned a Mercury Prize nomination for their debut. Nevertheless, Chancellor said they have raised their game for the follow-up.

“Without a shadow of a doubt, absolutely,” he told Music Week. “They’re very driven, committed, talented young women. They've moved on, the songwriting and the production have got bigger and better. Live, they're just exceptional. We’ve seen the growth and development of the band, they're just doing all the right things.”

So might they be in with a shout of a second consecutive Mercury nomination later this year?

“It would be one of my dreams come true if it happened,” said Chancellor. “But we’ll have to wait and see.”