The Psychedelic Furs on their first album for 29 years 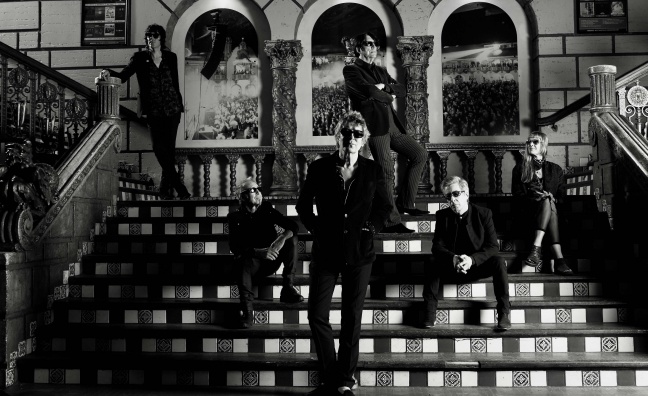 In the ‘80s and early ‘90s, The Psychedelic Furs were one of the biggest alternative rock bands on the planet, with songs such as Love My Way, Pretty In Pink (the subject of a recent Music Week Hitmakers) and Heaven conquering airwaves and indie discos on both sides of the Atlantic.

But the band went on hiatus in the ‘90s and, while they reformed as a live act in 2000, they’ve not released a new studio album since 1991’s World Outside.

That, however, is about to change, with their eighth album Made Of Rain due on July 31, via Cooking Vinyl. And, with the band’s music more popular than ever thanks to sync placements on Stranger Things and Call Me By Your Name, bassist and songwriter Tim Butler – pictured fourth from left, alongside (L-R) Rich Good, Mars Williams, Richard Butler, Paul Garisto and Amanda Kramer – got on the phone with Music Week to discuss their long-awaited comeback…

After 29 years, how frustrating was it to have to delay the album because of the coronavirus pandemic?
“It’s very frustrating. It’s been a while since we had our last album out, so we were all excited about the album and going out to play it to the public, but that’s all been pushed back. And when bands can tour there’s going to be so many out there touring. It’s going to be good for the fans, but you’re going to be bumping into bands left, right and centre! It’s going to be a big year, next year.”

Why did it take you so long to make a new record?
“First of all, we didn’t even think the break we took in the ‘90s was going to be that long! It was just going to be a hiatus, but it stretched on and, when we did come back together in 2000, we were tentatively thinking of doing an album, but we were also worried about whether we could write and record something that could stand up alongside our better albums from the ‘80s. We would do demos and not be happy with them until, finally, we did this album in two sessions. We all had really new ideas. One song on the album, Wrong Train, is quite old, but it’s been totally re-envisioned. But the other songs on the album were rehearsed and worked out six to nine months before we recorded them, so it’s all pretty fresh. Which is another reason why we were so looking forward to going out and playing it. They’re not old songs, listening to them is still exciting and we just want to get out there and get the excitement of playing them to the audience.”

With Richard Butler’s voice you can’t really not be the Psychedelic Furs!

You wouldn’t actually know you’d been out of the studio so long – it’s a pretty classic sounding Furs album…
“Yeah, with Richard’s voice you can’t really not be the Psychedelic Furs! It’s one of the most distinctive voices in alternative rock over the last 40 years. The good thing is, Richard Fortus, who co-produced it with us, was an old-time fan. So he guided us into what was the best part of the Furs and steered us away from what was maybe the worst part! That was really healthy for us, because we were all over the place as to what period of the Furs was the best. Richard has always said he thinks [1981 album] Talk Talk Talk was the best and my idea of what was the best was [1982’s] Forever Now. But with this, we got a cross between the two, but brought up to date. It’s definitely an album that stands up to new music that’s out there at the moment, which is heavily tinged with the ‘80s sound.”

Do you feel like the band became more influential while you were away?
“What is strange is that, when we first split up in the early ‘90s, the whole grunge thing was going on and all those bands badmouthed bands from the ‘80s. Then, when we got into the late ‘90s and 2000s with bands like The Killers and Arctic Monkeys, they took a certain part of the sound from the ‘80s and a lot of other bands said, ‘Ah, maybe I should check out the guitar-driven sound of the ‘80s’. A lot of other bands checked us out and enjoyed the music so they namechecked us – and we started to get good reviews rather than bad ones! I think there were more memorable, influential bands in the ‘80s than there were in the 90s: Depeche Mode, U2, The Cure… the list goes on. But I can’t pull as many from the ‘90s.”

Why do you think you get so many syncs?
“I can’t really say, other than to imagine the people who are in charge of the music departments for those movies and TV shows are fans of the Furs from the ‘80s. Maybe they were at college in the ‘80s, when we were all over college radio. They’re just fans who’ve grown up and still appreciate good music. I remember hearing about Love My Way being on Call Me By My Name so I went to see it, and it was in there two or three times! There’s actually a scene where people are talking about having gone to a Psychedelic Furs concert and saying, ‘Richard Butler’s great’. It was like, ‘Wow, whoever wrote this film is a huge fan’. It was very gratifying, it makes it all worthwhile to know you’ve made a lasting impact on people.”

Your most famous sync, of course, was Pretty In Pink in the movie of the same name. How did that come about?
“The first we heard about the film was when someone told us Molly Ringwald had asked John Hughes to write a movie vehicle for her around the song, because she was a fan. Then we heard another band was going to re-record it because the people in charge thought the guitars were slightly out of tune on the original, which they weren’t! We said, ‘Woah, no, we don’t anyone else to re-record it, we’ll do it’. But the new version came out far inferior to the original for me, it’s less aggressive, more radio-friendly and smoothed out all the edges. It was perfectly in tune or whatever, but it lacked the emotion and the energy of the original. The new version became a bit of a curse for us. It attracted a lot of new fans, but they tended to be young girls in pink T-shirts screaming at the front of the stage. And a lot of our older fans were like, ‘Screw this, they’ve sold out’. So it gained us some fans, but lost us others.”

Everything has changed since you last released an album. How do you feel about streaming?
“Well, we’ve got to grips with it. But the funny thing is, vinyl’s making a comeback. Made Of Rain is going to be issued on vinyl and there are even people making cassettes. What’s next, 8-tracks? The whole streaming thing for me, as long as your music gets out there, any way is a good way, so more people can hear it. It takes a lot of the power away from big record companies. A band can record in their home studio and put it online and get a big following without the pressure from a record company.”

You used to be on a major, now you’re with Cooking Vinyl. How is that working out?
“Well, we’ve only just signed with them and this is the first thing we’re releasing with them. So we’ll wait and see. But they’re doing pretty well at the moment. We’ve met with the head of the company [MD Rob Collins] and he’s an old fan, so I think he’ll treat us with a little bit of delicacy!”

* To read our recent Hitmakers on Pretty In Pink, click here. To make sure you can access Music Week wherever you are, sign up to our digital issue by clicking here.