"You either adapt, improvise and overcome or you go extinct": Inside the Evolution of multi-platinum metallers Disturbed 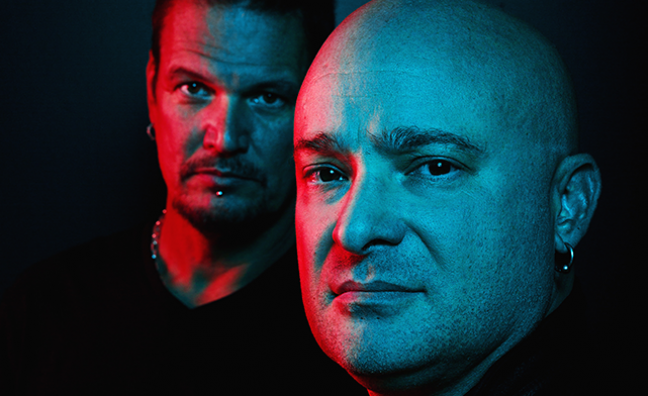 In the new edition of Music Week, we catch up with multi-platinum selling Chicago metallers Disturbed. Today (October 19) the group release their new album, Evolution via Reprise Records and, oddly for a band who’ve already sold 16 million albums worldwide, scored five consecutive No.1 albums on the US Top 200 chart, five gold and one silver-selling albums in the UK, it seems primed to be their biggest yet.

In 2015, the group released their cover of Simon & Garfunkel’s The Sound Of Silence as the third single from their Immortalized comeback album – their first since a hiatus. You could say it went down well. It went triple-platinum, has been streamed 249,969,665 times on Spotify, and even scored them a nomination for Best Rock Performance at the 2017 Grammy Awards. As Warner Bros president Phil Christie told Music Week in the feature it, "proved a heavy rock band can have a streaming hit with the right record.”

Given rock and metal’s well-documented struggle to adapt to the streaming world, Disturbed are one of but a few success stories. Indeed, when Music Week last crunched the numbers, Disturbed and Fall Out Boy – both, as Donegan points out, native Chicagoans – plus Paramore were the only three bands in the Top 30 most streamed rock songs  of the past year that were not classics of yester-decade.

In the feature the group admit to their surprise that it turned into the hit it was, but are reluctant to suggest to other bands that a cover is a sure-fire way for rock to conquer streaming. One thing for certain is that, on the back of The Sound Of Silence, Disturbed they feel they have the real opportunity to break new ground on this release, especially with their new partnership with Q Prime Management, whose co-founder and Metallica  co-manager Peter Mensch is also interviewed in the feature.

Here, in an unread extract from our feature, Disturbed’s vocalist David Draiman and guitarist Dan Donegan take us further inside the making of their new album...

Evolution shows Disturbed pushing their sound more than on other releases – how did that come about?

Dan Donegan: “Over the years we’ve talked about doing some acoustic ideas but we would always dive into the the plugged-in stuff and so we never got to it. This time around we said, 'Let’s dive into that first.' The first couple of song ideas started with acoustics, which is the first time in our career of making it a priority. Once we got the ball moving down that road, it came together really well. It was new territory for us, but it was exciting.”

David Draiman: “It’s liberating. Absolutely liberating. It’s so enjoyable to go in a new direction with the songwriting partner that I’ve had our entire career. To be able to do things together as a band that were so uniquely different from anything we’ve done in the past is very, very fulfilling.”

At one point you considered releasing a split album with an acoustic CD and a rock one – what finally made you merge them into one disc?

Draiman: “This album was very, very much inspired by the classic rock bands. If you listen to some of those classic rock records, it wasn’t one dynamic the whole way through. It really took you on a journey.”

Donegan: “From Kansas, to Genesis, Peter Gabriel, Eagles, Toto, those great classic rock albums were not formulaic. We’ve been digging back into those. We’ve always had our classic metal band inspiration throughout our career, but I think our fans will see, too, that there is not one definition as to what this band should be. We’ve always been lumped in the category of ‘nu-metal’ because we came out of that time when that label was there, but, there’s more to us. We’ve survived it. For all the classic metal bands we grew up to, we’ve also been inspired by the classic rock bands.”

According to MW research, you’re one of very few modern rock bands to have cracked streaming. Why has the genre struggled to adapt to it?

And how do you feel about the album format as a whole?

Draiman: “People consume song by song. It’s kind of a shame that that’s going by the wayside because there’s definitely something to be said about the continuity of a body of work.”

Donegan: “I hate that. I just hate that this generation doesn’t get what we got when we were kids, of just appreciating that whole body of work, be it Number Of The Beast or Back In Black and Appetite For Destruction. All those albums from start to finish.”

Do you think it will all come back around?

Draiman: “I don’t, because people’s attention spans have shifted. It’s like hoping that CDs would have stayed current. It’s just the evolution of technology and how people consume unfortunately, whether we like it or not. You either adapt and improvise and overcome or you go extinct. Another big fact is if you look at the [Music Week] list, the songs and the bands on it at the top that aren’t us and aren’t Fall Out Boy are ones that benefited from a period of time where rock and metal was at the highest level of visibility in its existence. There was every single outlet in the world that they had available to them. Video, audio, radio, everything. Nowadays, it’s so diminished and narrowed so significantly.”

You’ve been a band for over 20 years now, what’s the best business lesson you’ve learned along the way

Donegan: “For us, early on, we took it upon ourselves to become a promotional machine and go out there and do everything we can and not expect somebody else to do it for us. Who’s going to want it more than us? Is a manager going to work harder than we will for ourselves? We’ve trusted people, and there’s a great family we have within this, but we’ve always been hungry and we’ve always been on top of things. We’ve seen a lot of great bands make some bad business decisions. It’s affected their careers and you sit back and think, ‘Why are that band not bigger? They’re a great band.’ Then you find out there were some poor decisions within the business and that hurt them.”