The Entertainment Retailers Association (ERA) has issued its UK consumer spending figures for 2019. And while physical music and downloads are down again, streaming is surging ahead with strong year-on-year growth in subscription services.

The headline figure is £1 billion – that’s how much UK consumers spent on music streaming services in 2019 (£1.002.9bn to be precise). The year-on-year increase in streaming spending was 23.5%.

The performance of subscription services including Spotify, Apple Music, Amazon Music, YouTube Music and Deezer helped total UK consumer spending on music reach £1.41bn, a year-on-year increase of 7.1%. It’s a result in line with the BPI’s latest figures for 2019.

ERA has divided the music retail sector between access (ie streaming) and ownership (physical and downloads), with a split of 71.1% and 28.9%. According to the BPI’s unit measurements for 2019, streaming accounts for 74.4% of consumption.

Based on preliminary data compiled by ERA, the streaming spend is four times the total of five years ago. That’s helped the music sector record its fifth successive year of growth.

ERA CEO Kim Bayley said: “The rise of digital entertainment services has created the biggest revolution in UK leisure habits in history, enabling people to access the music, video and games they love wherever and whenever they want, and transforming the fortunes of record labels, filmmakers and games developers. The fact that in 2019 over 80% of entertainment spending was on digital services shows the scale of that revolution.”

That result is contrasted by a continued decline in physical music, which is down 17% year-on-year to £318.1m. For the decade as a whole, spending on physical music is down 63.5%. 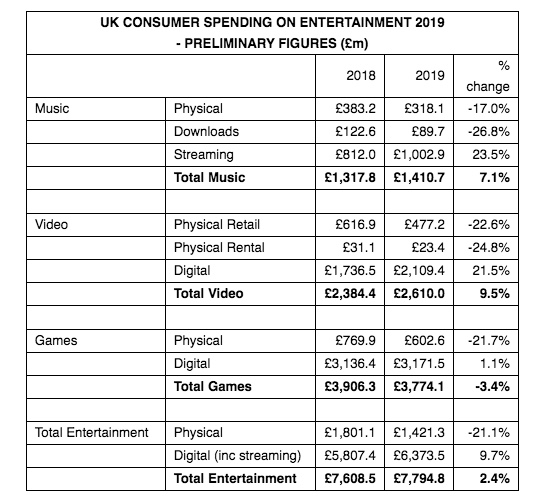 The rise of vinyl continues – up 6.4% year-on-year to £97.1 million. While BPI unit stats have vinyl accounting for one in eight album sales in 2019, in retail value terms it’s more like a third (30.8%). Last year HMV significantly expanded its vinyl offer.

The strength of vinyl in proportional sales terms is partly down to the decline in CD sales, which fell by 24.7% in retail value last year (£216.99m) – less than the unit decline of 26.5%, which suggests prices of deluxe editions are holding up. Cassette sales are growing but remain niche: ERA’s ‘other physical albums’ spending total is £1.14m.

Downloads are the real losers from the switch in consumption. Some music consumers clearly still prefer the ownership model, though downloaders are converting to subscription streaming. Consumer spending on digital albums was down 27.5% year-on-year to £53.2m.

Despite falls in sales of physical music, video and games formats, strong demand for digital services was sufficient to produce overall entertainment market growth of 2.4% to £7.8bn, its seventh consecutive year of growth.

“There is no doubt retailers of physical product had a tough time in 2019,” said Bayley. “But physical entertainment was still a £1.4bn retail business. Sales of vinyl and 4K Ultra HD discs are buoyant and still growing and we still have huge hit phenomena like FIFA 20 which can sell 1.5m physical units at around £40 a time. Physical is down, but it’s definitely not out.”

Physical is down, but it’s definitely not out

The year’s biggest-selling album was Lewis Capaldi’s Divinely Uninspired To A Hellish Extent (EMI), which moved 641,000 units across all formats.

Bayley added: “As more and more people sign up to streaming services, it obviously becomes a challenge to maintain the same rate of growth, but the fact is UK music fans spent £190m more on subscription streaming services in 2019 than they did the year before – that’s more than twice the value of the entire vinyl market.”

Digital video sales grew by 21.5% to £2.11bn, while physical revenues decreased 22.7% to £500m. The biggest video hit of 2019 was the Queen biopic Bohemian Rhapsody with 1.7m copies sold, two thirds of them on physical formats.

Games remains entertainment’s biggest sector, but after years of growth in 2019 it shrunk by 3.4% to £3.77bn - its first year without growth since 2012. ERA blamed the decline on a slowdown in sales ahead of the expected launch in late 2020 of the new PlayStation and Xbox consoles. 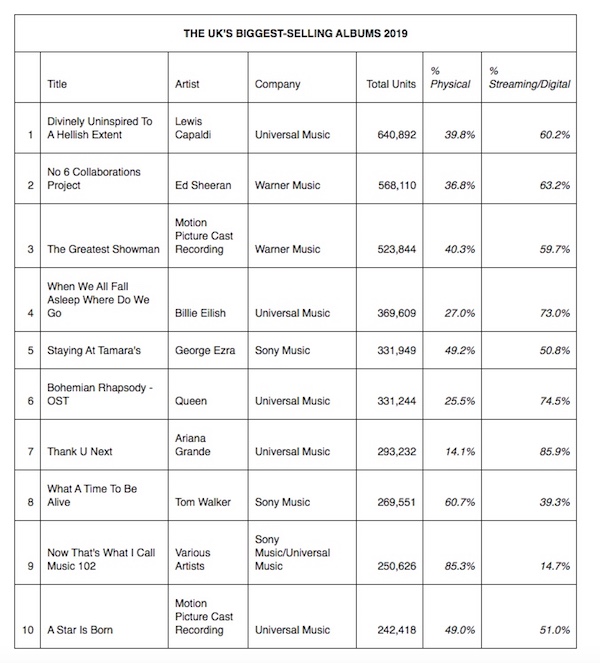