Seven things we learned at the Music Week Tech Summit 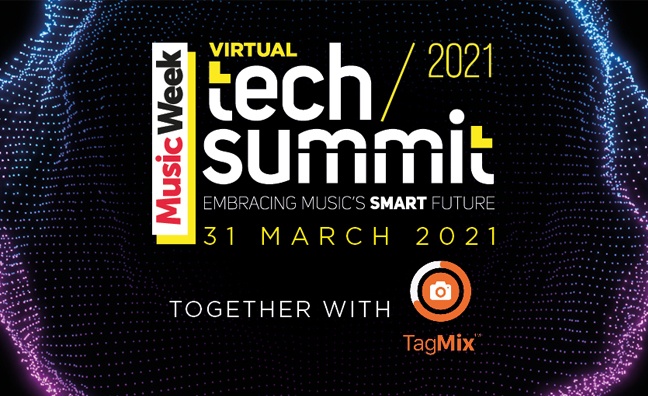 The first ever virtual Music Week Tech Summit featured a host of top names discussing everything from livestreams to royalty portals. Read on for our round-up of key takeaways…

With news of Glastonbury’s first ever livestream event dropping on the morning of the Music Week Tech Summit 2021, our Livestream Beyond The Pandemic panel could hardly have been timed better. And while the overriding theme of the discussion centred on the need for better collaboration from the wider music industry around livestreaming, the session made clear the pivotal role Worthy Farm has played in the livestream boom, in spite of two fallow summers.

“If I look tired, it's because I haven't slept in four days,” began Claire Mas, newly installed at Driift, which is producing the Glastonbury stream in May. “We’re excited for Glastonbury’s first ever livestream and a really exciting production across the world to let people experience the magic of the farm.”

Mas also promised that a range of secret special guests are lined up to join Coldplay, Damon Albarn, Kano and Wolf Alice on the bill.

Shangri-La and Lost Horizon’s Kaye Dunnings also knows a thing or two about making up for not being able to go to Glastonbury, having spearheaded Shangri-La’s immersive virtual incarnation during the pandemic.

“We didn't just want to put on a livestream of anything, because that was already covered,” said Dunnings, who wants to add VR to the offering in the future. “We wanted something that was a little bit more interactive and as close to the real thing as we could get, we wanted our audience to be able to hang out, talk and communicate. It was adding that element of risk that you get from a live experience that we were really missing.”

Paul Hourican, UK head of music operations at TikTok, concluded the Tech Summit in style with a special message from Yungblud and some reminiscing about his days at Virgin Megastore in Oxford Street.

What’s changed since his first job in music as a teenager? Not so much, actually.

"It's still about amazing songs," Hourican told the virtual audience. “TikTok is helping to break artists, drive streaming numbers across all DSPs, propel chart success and is an integral partner to artists, labels and other rights-holders. Quite simply, we are witnessing a cultural evolution through UGC short-form video entertainment.”

TikTok is a BRITs partner again this year and Hourican outlined the success it’s had with UK music, including 10 trending songs hitting No.1 in the UK last year. And we can’t ignore Wellerman in 2021, another TikTok phenomenon.

“We would like to see how we can look to improve products and the user experience, and how we can work more closely together [with the industry],” added Hourican.

The New Tech Leaders panel was packed with good advice, from Tagmix CEO Andy Dean’s message of exposing people to products early and acting on feedback, to Terrible’s Tersha Willis imploring tech start-ups to embrace the tough questions and No Signal co-founder Jojo Sonubi stressing the importance of canvassing opinion from the younger generation.

Ministry Of Sound GM Negla Abdela agreed, with all four panelists settling on the idea that the music industry echo chamber is overrated.

“It's arrogant to think that we can know everything all the time, that we can keep up with everything and keep moving,” she said. “I can read about everything going on, but if I'm not living experiencing it consumed by it. You can't really be in an echo chamber where it’s you and your colleagues telling each other what's right.”

Anyone who caught the Under The Influence panel got a dose of reality from Holly H, who with more than 16 million fans on TikTok, knows a thing or two about the subject. The star used this panel discussion – where she appeared alongside Parlophone’s Anya Du Sauzay, Be-Hookd Digital’s Kat Ober and Creed Media’s Timothy Collins – to emphasise the importance of keeping it real in a world of video clips, trends and viral hits.

“I've never wanted to work with a brand, artist or company that doesn’t fit me and my audience perfectly because the value decreases if you do,” she said. “Especially, working with artists, it's nice to do something more real and work with the artist and do something fun that engages your audience and their audience. That's way more interesting to me than just using a song, because the likelihood of one song going completely viral is so much less if you're not investing in something.”

Be honest, when do you first get to grips with music publishing? Everyone understands a record deal, but how does a teenager making music ensure they’re on top of all their rights.

Go 2 Agency founder Shauni Caballero launched her consultancy and publishing company for this reason: to help and empower young songwriters.

Speaking during the Portal Combat panel, Caballero said: “People aren't really aware of publishing. I work within the rap world and I work with a lot of Jamaican artists, and everyone's pretty much clueless. When I go into these meetings with them, I always say, ‘Don't feel silly for not knowing’. Being very honest, I was in the industry for six years before I even found out what publishing was.

“I find that that's still an issue. It's a huge rabbit hole and that's what inspired me to have my own publishing company. That’s why I'll always consult, because there is this massive knowledge gap.”

The panel on Music’s In-Game Experience was all about the huge opportunities on platforms such as Roblox. You can read about the panel here.

Another takeaway from that session is that gaming partnerships are becoming more accessible, with Roblox’s global head of music Jon Vlassopulos recently telling Music Week that the gaming and social platform needs six weeks to work on a label proposal for a virtual event.

During the panel, Sara Schoch, executive, music brand partnerships at UTA, spoke about how lead times have come right down for platforms such as Fortnite, where the Travis Scott spectacular from a year ago was reportedly in the works for 18 months.

“We've seen with Fortnite, in particular, and their ability to scale an immersive concert in-game, that lead time has shrunk,” she said. “We did one with Dominic Fike and, granted it wasn’t as technically involved [as Travis Scott’s], but that took six weeks to put together. So the technology companies are becoming more flexible, and there will be far more opportunities to create artist-driven worlds within these games.”

Remember when virtual reality was all about expensive and unwieldy kit? At the Tech Summit, Napster’s chief relationship officer Steven Hancock used his keynote to address the growing reach of the platform (originally called MelodyVR and now renamed following its acquisition of Napster).

VR uptake is now accelerating thanks to a simple 2D offering via smartphone, which launched in 2019. Users can still look around in 360 degrees by turning the phone and switch viewing positions.

“We just needed to make it accessible for people to take that first step into immersive content,” said Hancock, who noted that a Wireless Festival partnership was accessed 250,000 times.

But while VR interest has been heightened by the pandemic, Napster sees the future of live as a hybrid with virtual reality complementing gigs. “We are the first to want to see live return,” said Hancock.