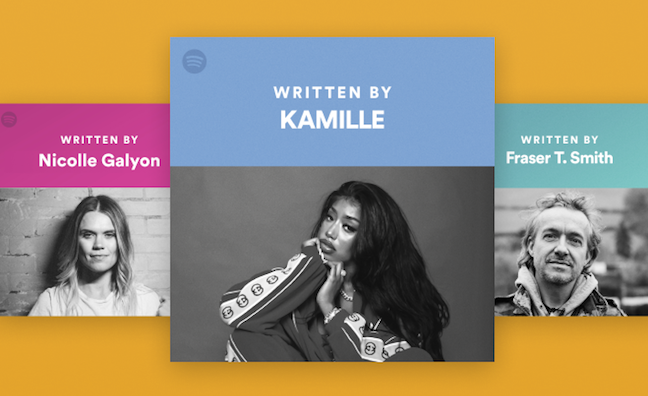 Spotify is rolling out hundreds of songwriter pages and Written By playlists.

Since Spotify began publicly displaying song credits in 2018, the streaming giant said it has seen a 60% increase in how often labels and distributors credit songwriters on their new releases.

It follows moves by DSPs to shine a light on songwriters. Apple Music has partnered with the Ivors Academy on a new award for rising stars.

However, the publishing sector has been embroiled in a row with streaming platforms – Apple Music excepted – on royalties in the US.

Jules Parker, Spotify’s head of songwriter and publishing relations, is heading up a new team across Los Angeles, New York, Atlanta, and London focused on expanding the DSP’s support of songwriters and publishers all over the world.

“Songwriters and publishers are vital parts of the music industry, though what they do is less publicly known, so they often don’t have the visibility they deserve,” he said. “But we can help with that, because Spotify has a unique ability to drive discovery.

“With the expansion of songwriter pages we’re continuing to evolve how music is discovered, appreciated, and enjoyed by the world. Supporting publishers and songwriters goes hand in hand with artist discovery. People know who an artist is. They don’t know who the writers are, necessarily. If we can help make those connections, we help people discover new music and open up potential career opportunities for the songwriter. It all ties back to our mission of helping creators live off their work.”

He added: “I was actually just listening to Mark Ronson’s Written By playlist and I discovered new tracks that I didn’t know he had written. I then discovered new artists because of a songwriter I love. It goes both ways. We’re exposing those connections that are not always visible but so important.”

Parker said that songwriters can, like artists, build their careers based on Spotify’s data.

“At Spotify, we’re now giving publishers and writers more ways to help unlock opportunities via analytic and songwriter tools,” he said. “These will, long term, help support both up-and-coming and established writers because they’ll have more information, leading to better connections and networks.

“Through our Publishing Analytics, publishers and teams can access next-day song and writer stats based on accurate data, and through our songwriting camps and free-to-use studio spaces, writers and artists can pair up to create something new.”

In other news, Spotify and Omnicom Media Group have announced a global strategic podcasting advertising partnership. Clients of Omnicom Media Group agencies Hearts & Science, OMD and PHD will have first access to the platform’s exclusive podcast content. The $20 million (£15.8m) deal begins today and goes through the remainder of 2020.

“This partnership is a breakthrough moment for the podcast industry and audio advertising at large,” said Spotify’s Lee Brown, VP, global head of advertising business. “We couldn’t be more ecstatic to have an agency of Omnicom Media Group’s global influence and imprint recognising the value of podcasts for their clients in such a significant way. We look forward to partnering with OMG to unlock the creative possibilities of audio and building rich connections with listeners worldwide.”