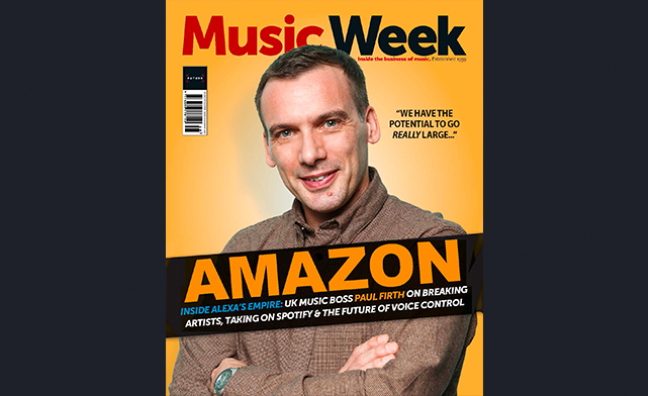 In the new issue of Music Week we welcome Amazon Music UK director Paul Firth to our cover for an in-depth look at the retail giant’s streaming empire.

Since Amazon Prime Music arrived in 2015 (as a free add-on to Amazon’s Prime delivery service), and following on from the launch of Amazon Music Unlimited in 2016, the company has established itself as one of the UK’s pre-eminent streaming services. Indeed, a report from data analysts Kantar Worldpanel recently suggested that, in terms of active users, Amazon Prime Music actually surpassed Apple Music for the first time in 2018 – though Apple stress that their users are likely to generate a much greater volume of streams than Prime Music’s more casual users.

In our comprehensive interview, Firth tackles a range of topics, including how they approach competition from Spotify and Apple, the recent changes in their consumer base, the future of voice control and how, well, they’re already a lot bigger than they thought they were going to be since launching Amazon Music Unlimited…

Here, in an unread extract from our cover feature interview, Firth tells Music Week about Amazon’s relationship with physical music and how Alexa makes them a truly unique proposition…

Has the arrival of Amazon Music Unlimited led to upselling on the physical side – are people streaming records, then buying them?
Paul Firth: “One of the things we track is how people move between the different formats and what we call the ‘hybrid customer’ is certainly growing in music. You can see people are doing both. Some of that, of course, depends on the time frame you look across, and how recently they did both of those things. I used to run the physical store here as well, and the difference really is between subscription and ownership, not the difference between physical and digital. It’s around the difference of type of customer engagement. In a retail store, whether in a shop or our online store, you don’t expect people to come all that often – 70% of people spend £30 or less. That’s not many visits to your store, whereas in a streaming service you want people on your app or device everyday, every hour, two or three times a day. The nature of interaction and frequency of interaction is quite different. Sometimes you can look at someone and decide they’re only doing one thing or the other, but then actually they come and buy again, because they only used to buy twice a year anyway. So, you have to track it in a certain way, but we definitely see customers displaying hybrid behaviour – which is that they shop the physical store and they stream. A lot of the data we’ve seen, and externally too, is that a lot of people are buying vinyl and streaming, and there’s a good strong chance that for many people that piece of vinyl is more like merchandise. It’s a great way of showing you love a band, the same way you buy a t-shirt. And we sell those too, of course! To be able to offer customers so many different things to do with music all in one place as we do is fantastic.”

Amazon is No.1 overall for entertainment retail, but you lost the physical crown to HMV - was that a cause for concern?
“Physical music is not my part of the business anymore and I’ve not had a chance to discuss that with the team there. I think we’d be focusing on our own customers. I’ve worked in music for many, many years and I think HMV are a good retailer, I’m really pleased they’re doing well. Ten years ago I was working at Entertainment UK, where I was head of music, and we went into administration. Entertainment UK was part of the Woolworths Group and it was a profitable business. When we saw Woolworths go, not all of the sales found a home again. That’s why I think it’s great that HMV are strong. They do really good things.”

How do you see Alexa as differentiating itself from competition like Google Home or Apple Homepod?
“They’re both excellent products and work really well, which is why we have to continue to always innovate and think again about how people use our service. It’s that focus on how people talk about music, how they ask for music. One way we’ve always demonstrated that right from the outset is that you’re able to ask for a song by lyrics, like, ‘Alexa play that song that goes Kiki do you love me?’ I used to work in a record shop and people would always ask for a song that way, it’s a real life way of people asking for music. We want people to be able to talk to Alexa that way. It’s a real focus on the natural language – that’s actually the technical phrase for it – and the way they can talk as naturally as possible to Alexa, that’s what will help us differentiate ourselves.”