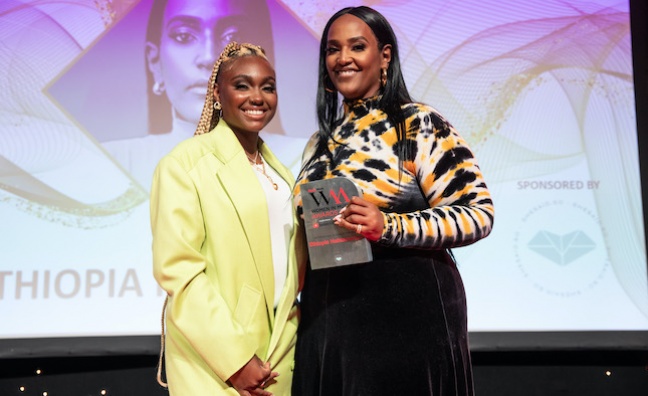 Here, Women in Music Awards 2021 International Woman Of The Year Ethiopia Habtemariam, chairwoman and CEO of Motown (pictured with Tiana Major9), reflects on her career so far...

How does it feel to be named International Woman of the Year?

"It has taken more than a second for it to settle in. Because I think often, as women, we can be head down, just doing the work, and I've been guilty of that for a large portion of my career. And so I feel really honoured. To be honest, I've got to the place where I realised it's important to take these moments when you're recognised for the work that you do and to allow yourself to feel it. So I feel very grateful. It just kind of hit me when I was talking to a friend just before I flew to London. She was like ‘What are you in London for?’ And I was like, ‘Well… I'm getting this award’.  And she looked at me and said, ‘That's a big deal!’. And it is. It's a really big deal."

Why was it important to you to attend the awards in person?

"For me, personally, the UK and London has always been a place where I've felt creatively inspired and free. And I also realised that as a Black woman it's really a big deal to be honoured in this way. So I thought it was really important to be present, to own that and acknowledge that and for that representation. Initially, I didn't think I'd be able to come and there was a conversation around just doing a video. And I was like, ‘No, I want to be in the room!’. I wanted to be around the incredible women that are here in the UK. I’ve looked up to so many of them, or their colleagues, over the years."

This has been a big year for you. In February you were appointed chairwoman and CEO of Motown Records. How did it feel to reach that position?

"It's interesting, because I've never been someone that's been focused on getting to a certain title or what have you. I've been focused on building out the roster of talent and building this incredible team. For Motown to be a standalone label now, to have the opportunity to run our own race, that’s what I'm most excited about, that level of autonomy. I remember telling David Joseph [chairman and CEO of Universal Music UK] that it was my goal to get Motown’s logo up in the Universal building.

"The support we’ve had is massive. Building Motown is like shaping and building and curating this nice piece of art. And it feels really good. And so I'm proud to be the chairwoman and CEO, I'm proud to be able to cultivate a team that has great synergy and belief in artists and talent, because ultimately, that's what it's about. We’re creating a new culture within our company. I’m excited for the future."

What do you think about your role within the wider culture of the company? There are very few women at your level.

"I have felt, and I continue to feel, that there is a massive change happening. And I think maybe my appointment is at the forefront of that. I've been in the industry for a long time now. And I remember there being incredible women when I was younger, that I would look up to and then it kind of went away. As you move up in your career, you realise there aren't as many in leadership roles."

I’m grateful that I've been able to move forward, but I feel a huge responsibility to bring up other women with me

"I’m grateful that I've been able to move forward, but I feel a huge responsibility to bring up other women with me. Supporting other women has always been a part of my path. When I worked in publishing, there was a point where my whole A&R staff was made up of women. It wasn't because I intentionally went out to hire women, it was because they were the best people for the job. And they've each gone on to have incredibly successful careers. That level of diversity should exist in every area of our industry, not just in the marketing or PR roles.

"Although I'm grateful and thankful that I've been able to get to this level, I also have to make sure that I do a great job so that there are more opportunities for women. But I think the change is happening. I think we busted the door wide open, but that means we have to have success and deliver. You create other opportunities for women by doing well. The onus is on us to move the ball forward."

What would you like to see in the music industry of the future?

"That is a big question. I would love to see, with all companies who are invested in music not just the labels, that the teams those companies have look like the audiences they are promoting their music to. It’s a key element. It’s not just about the term diversity, it is understanding that you want to make sure you have that representation inside your organisation so that everyone has a voice and that their perspective is respected. I also think this will happen with or without the industry embracing it. The younger generation is so ambitious and so fearless. They will build something new on their own."

As International Woman of the Year, what would you like to see internationally?