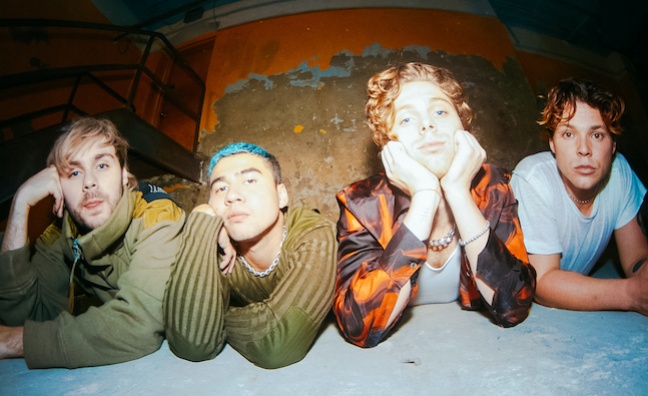 5 Seconds of Summer (5SOS) have signed a new global recordings deal with BMG – their first new label home since the release of their debut album.

The Australian band were previously signed to Universal Music and Polydor in the UK. Their fourth album Calm peaked at No.1 last year.

It follows Louis Tomlinson’s move to BMG earlier this year. He previously recorded for Syco/Sony Music as a solo artist and member of One Direction.

Touring the world several times over, the band have sold over 2.5m concert tickets and amassed eight billion streams. This year marks their 10th anniversary together.

Louis Tomlinson is a long-term supporter of 5SOS going back to their early days a decade ago.

Been a fan of this band for a while, everyone get behind them http://t.co/pnRtsffz

The band’s third album Youngblood, released in 2018, became their third No.1 album in their home country. In the US, 5 Seconds of Summer became the first Australian act to achieve three consecutive chart-topping albums.

In a collective statement, 5SOS said: “We are both proud and excited to be sharing this next chapter with the team at BMG. Their ambition and drive to partner with us was clear from the very beginning and they very much supported our vision for the future. They encourage our independence as recording artists and we love how collaborative this relationship will be, which feels important for us in our 10th year as a band. We want to thank everyone past and present for being part of our journey and can’t wait for our fans to hear new music which will be coming very soon!”

Benjamin Evans, manager of 5 Seconds of Summer, said: “It is testament to the band’s unity, hard work and ambition that in this 10th year together, they still share the same enthusiasm and aspiration to make music and be the biggest band in the world. We’re now looking forward and want to thank Hartwig Masuch, Thomas Scherer, Dan Gill, Cyndi Lynott and the entire team at BMG for showing such passion to be part of this band’s future.”

Dan Gill, BMG, EVP recorded music, Los Angeles, said: “After an extraordinary decade of creating music together, 5SOS continue to grow and evolve, producing new and invigorating music that is just as effervescent as ever. Their dedication to the fans drives them creatively to reach new levels of sophistication in their music and their passion is unrivalled. We look forward to a very bright future together introducing their new music to the world.”

Thomas Scherer, BMG, president repertoire & marketing, Los Angeles & New York, said: “With their high level of success and global appeal, BMG is the perfect partner for a band of this magnitude and what they want to accomplish. Ash, Michael, Luke, and Calum are now in the driver’s seat as both entrepreneurs and creators. We will be working together as partners every step of the way to bring them to the next level they so very much deserve. We are proud to welcome the band, Ben Evans, James Sully, and the entire 5SOS team and family to BMG.”