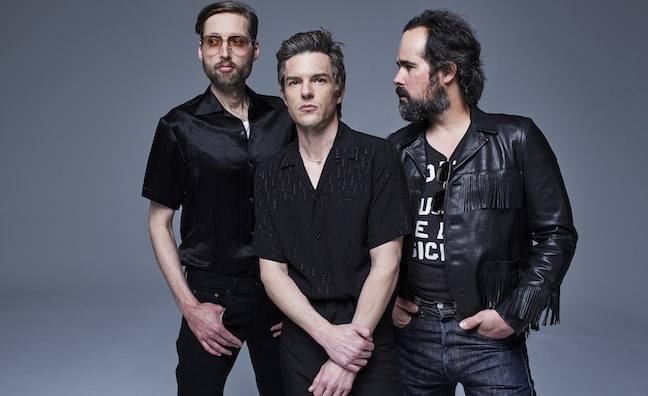 It’s a huge week for The Killers. They’re on the front cover of Music Week this week – and now their new album, Imploding The Mirage, is on track to become the fastest-selling album of the year in the UK.

The album was one of many delayed by the coronavirus pandemic, and what would have been the band’s biggest-ever UK tour has also been pushed back to next year. Yet, having passed 40,000 sales by the Monday midweek update, the band are closing in on Lady Gaga’s 52,907 first-week sale for Chromatica, and you can bet their UK label, EMI – under the new leadership of president Rebecca Allen and also enjoying a hugely successful campaign for Taylor Swift’s Folklore album at the moment – will be pulling out all the stops to get there.

EMI MD Clive Cawley is the man pulling the strings, and he sat down with Music Week to take us inside the all-conquering campaign for The Killers’ sixth studio album…

What were your hopes and expectations for Imploding The Mirage?
“Our hope and primary goal is to make The Killers the first international band to have a mind boggling sixth No.1 studio album in the UK – eight if you wanted to be generous and count Brandon’s two solo albums which also hit the top spot! Quite an achievement and one we feel strongly about making a reality.”

How have you adapted the campaign in light of the pandemic?
“It’s been a stop-start process since we launched a ticket pre-order bundle as far back as November 2019. With the album originally slated for a May release it’s been somewhat of a challenge to maintain public and media interest and enthusiasm. Full credit to both the band, for delivering an excellent record, and our team working the project for never giving up and making sure we do it justice across every department. It’s just kept rolling along very nicely indeed.”

What is the strategy moving forward?
“To try and keep the band and the album to the forefront of people’s thoughts through the end of the year. Hopefully we can strategise a second wave around the rescheduled stadium tour dates from this year, which are now happening June 2021. There’s plenty of quality in there, with tracks that have glorious melodies such as Blowback and the bonkers-but-fabulous My God to still come. It all feels very much like they are cementing themselves even deeper in the history books of greatness.”

The band’s Direct Hits compilation continues to be a fixture in the UK albums chart seven years after its release, what do you put that down to?
“Direct Hits says it all! The strength and depth of their hits over more than a decade clearly keep winning over new audiences, week-in, week-out. Stick it on, I’d be amazed if you skip any of those tracks and also if you manage to resist the urge to crack open an ice cold cider/foamy lager of choice to enjoy it with!”

How effective was their 2019 Glastonbury headline performance in reigniting that back catalogue and reminding people how much they love the band?
“The secret set at Glastonbury in 2018 started the ball rolling faster, then for them to headline the Pyramid Stage for a second time in 2019 felt that they were and always will be a part of the festival’s history. Brandon’s performance has become a joy to behold, Ronnie is one of the best drummers out there in terms of ability and showmanship, and that headlining slot really put them head and shoulders above the rest. They’re just a fucking outrageously great live band.”