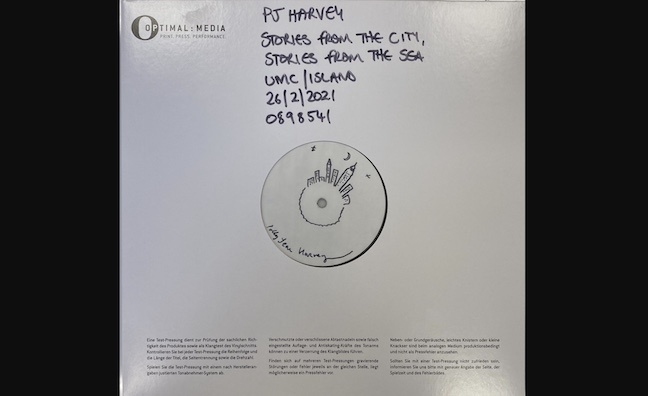 The White Label Auction in aid of The BRIT Trust has raised a net total of £33,920.

The music industry charity supports a wide range of causes that promote education and wellbeing through music, such as The BRIT School and Nordoff Robbins music therapy among many others.

Each of the 115 lots of various ‘white label’ LP test pressings, many of them signed or personalised by the artists, typically went for hundreds of pounds, with seven lots commanding four-figure sums.

With just a handful of white label test pressings produced by record labels ahead of the full release of a new album, these first-off-the-press copies typically go to artists and to archive, and are highly prized by collectors.

The highest price paid in the auction hosted by the music memorabilia and vinyl records specialists Omega Auctions  was £2,700 for a set of two test-pressings of The Cure albums – Japanese Whispers and Seventeen Seconds – with the former signed by Robert Smith.  A test-pressing of The Cure’s Bloodflowers LP, which was released in 2020 for Record Store Day, added a further £950 to the total raised.

A 2021 test-pressing of Stories from the City, Stories from the Sea, PJ Harvey’s Mercury Prize winning album of 2001, signed and personalised by the artist with a doodle on the disc label itself, sold for £1,800. Two test-pressings of Kylie Minogues’s 2020 album Disco, one a deluxe edition and both signed, went for £1,100 and £1,250 respectively, while three Eric Clapton related test-pressings, one as part of Cream, each sold for over £1,000 or more.

Other lots included test-pressings by artists ranging from The Who, The Kinks, Paul Weller, Blondie, UB40, and The Mission to Soul II Soul, Beastie Boys, KT Tunstall, and Neneh Cherry, with the final lot to go under the hammer, a 2-LP test-pressing of The Cranberries’ 2002 compilation, Stars, signed by Dolores O’Riordan’s mother and the surviving members of the band, which netted £400.

Johnny Chandler, A&R director at UMC, Universal Music UK, who came up with the concept of the White Label Auction and collated the items with his team, said: “With most offices still closed due to lockdown, it was really challenging for everyone involved to pull this together, which has made the result all the more wonderful. The level of artist support has been incredible. Whether it be signed copies from many including PJ Harvey, Robert Smith and Neneh Cherry, tweets and social posts from Kylie, Mark Knopfler, Eric Clapton, The Who and many more right up to the start of the auction, commitment from the artist community, the labels and ultimately the fans has been exceptional. So too the work of the teams at Omega Auctions and the BPI.

“With charities at present facing so many difficult funding situations, it’s brilliant these rare vinyl LPs can make a contribution to the positive work of The BRIT Trust, and I hope we can do it all again next year.”

Tony Wadsworth, chair of The BRIT Trust, said: “It seems like there is no end to the power of music to do good – it’s helped so many of us through lockdown, and now in the shape of the White Label Auction it is providing much needed funds that will support the vital work of The BRIT Trust. We are grateful to all the artists and labels for so generously contributing their test pressings and support, and to Johnny Chandler and the team at Universal UMC for pulling it all together.”

Dan Hampson, auction manager at the auction house Omega Auctions, said: “We’re once again astounded by the fantastic amount raised in aid of a great cause. This was a really enjoyable sale to work on and we’re honoured to have had the chance to sell some exciting and unique records. We saw excellent bidder numbers and some very strong bidding in this sale, which came together very well despite the limitations imposed by Covid. We’re excited to see what the next edition will bring.”