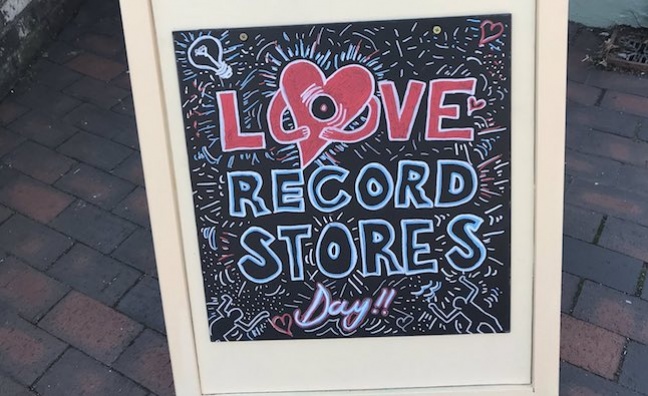 The Love Record Stores event delivered a big boost to music retailers, according to figures release by campaign organisers.

The event was a day of online shopping for vinyl exclusives at indie retailers and HMV, with a range of strictly limited-edition releases being made available to music fans.

The aim of the initiative was to provide participating stores with a significant spike in custom and revenues in the absence of Record Store Day, which has been postponed until later this year. Alongside the retail activity the event was supported by a virtual in-store, with performances by a number of artists and exclusive DJs sets broadcast throughout the day.

Eighty-three new and reissued vinyl releases were made available for the #LoveRecordStores event, with almost 50,000 units shipped to stores. A survey of participating retailers discovered that the vast majority of this stock was sold out within one hour of being made available online.

These sales resulted in over £1 million in revenue for participating record stores. Retailers who chose to reopen to the public had already benefited from a sales bump last week ahead of the Love Record Stores event.

Support for the #LoveRecordStores campaign from music fans has been evident on social media. Since the campaign launch in April, #LoveRecordStores became at one point the fifth most trending hashtag on TikTok and has to date received over 465m views. During the 24hr event, click-through rates from socials increased by 70% with Twitter seeing over 635,000 impressions and Instagram over 375,000 during the campaign.

Music Venue Trust was also a beneficiary of the event with thousands of pounds raised for its #saveourvenues campaign from the sale of a range of specially commissioned T-shirts.

Jason Rackham, MD of PIAS and one of the organisers behind the campaign, said: “We had really high hopes for our #LoveRecordStores event, but things exceeded even our most ambitious expectations. The feedback we’ve had from participating record stores has been phenomenal with reports of some doing a month’s business in less than an hour on Saturday. We always hoped this event would give record stores a boost and it’s definitely done that. Our ‘virtual instore’ was also amazing, with huge engagement from music fans over the 24-hour period. We have been stunned by the generosity and commitment of artists and the wider music community, which was hugely enjoyed by music fans this weekend.”

Natasha Youngs, co-owner of Resident Records in Brighton, said: “Well, that worked eh? The sales. The profile. The online events. The interaction. The artist and label engagement. The customer awareness. The website. The stock deliveries. All with a small team, less than 100 titles and only two lockdown months to do it in. That’s quite something!

“This has not only given record stores a huge sales opportunity but a massive confidence boost. Lots of stores have learned valuable lessons from this, as it’s forced all of us to be more resourceful and innovative. This is the only way we will survive and #LoveRecordStores has given us all a platform and profile on which to make our businesses stronger and more resilient for the future. We’ve all been blown away by the level of sales we’ve had and the amount of people we have reached this weekend. Thank you.”

Nigel House, of Rough Trade Records, said: "For Rough Trade, #LoveRecordStores has been a tremendous success, delivering the busiest online trading day in our history. Despite the obvious retail constraints of lockdown, there’s clearly significant demand for great vinyl releases, which goes to show how critical e-commerce has quickly become – at meeting that demand – for the UK's independent music retail sector."

Rupert Morrison, of Drift Records in Totnes, said: “The online traffic on Saturday was insane. We sold a month’s worth of records in 29 minutes. I am stunned by how amazing and successful this event was.”

Jeff Bell, general manager (international) of independent label Partisan Records, said: "Independent record stores (and music venues) are the lifeblood of our community. Seeing everyone come together to help ensure they are still around when we come out the other side of this is a massive testament to the #LoveRecordStores initiative, and something we are very proud to be a part of."

Peter Quicke, MD of Nijna Tune, said: “It was so inspiring to see the energy in the stores around the #LoveRecordStores event. Independent record stores are the lifeblood for labels, not just for selling records but as a link to avid music fans. In the early ’90s I used to deliver Ninja Tune releases to a load of record shops by hand – Fat Cat, City Sounds, Ambient Soho – so many great shops have come and gone - we really have to hold on tight to the shops we have!”