Paul Pacifico talks 2022 AIM Awards - and his next career move 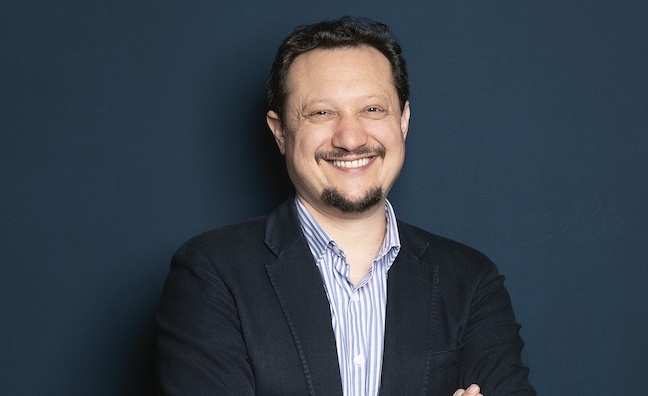 Outgoing Association of Independent Music (AIM) chief Paul Pacifico has told Music Week he is yet to make a decision on his future as he looks ahead to the organisation's 2022 awards.

The AIM Awards returns to London's Roundhouse on Wednesday, September 28 for its first in-person event since Covid. The Libertines and Lethal Bizzle, who will also be be honoured with the Outstanding Contribution trophy, have been confirmed for the AIM Awards Live Show, which takes place at 8pm following the ceremony.

Stormzy and Rina Sawayama will also be honoured, while the awards has also introduced new categories this year.

Last month, Music Week revealed Pacifico will depart the organisation at at the end of 2022 after completing his second three-year term as CEO.

The former Featured Artists Coalition boss has been tipped to succeed Geoff Taylor at the BPI helm, but insisted it's all just speculation at this point.

"The truth is, I don't know what I'm going to do next," he said. "I'm in conversations with a few different people about interesting ideas. I've got until the end of the year to see out my term at AIM and to help with the succession and the transition, so I'm really focused on that.

"In the meantime, I'm in a wonderful sweet spot of being open to ideas, but not yet panicking that I don't have a job to go to - and I'm going to enjoy that moment. When it comes towards the end of the year, I'll start to think I ought to have something lined up. But at the moment, I'm very happy to be exploring a number of ideas.

"All I know is I want to do something challenging, that stretches me and that feels really meaningful and worthwhile."

In his first three years as CEO, Pacifico led the move of the AIM Awards to the Roundhouse for its first ever public live show in 2019, headlined by Johnny Marr.

Here, Pacifico reflects further on the development of the awards, the health of the independent music nation and the legacy he hopes to leave behind at AIM...

How are preparations going for this year's ceremony?

"Preparations are great. It's exciting to be back in person and back at the Roundhouse - it really feels like the right venue for the AIM Awards. It was tremendously difficult to have to do two virtual years during lockdown, although the team did an amazing job, and there is a real sense of excitement through the community to come back together. We're experiencing firsthand the challenges our members have been experiencing in terms of increased production costs and pressures, and it's quite healthy for AIM to get a sense of what our members go through in that way. We see, in practice, the challenges that people are facing in terms of putting on shows in the  current environment. But I think we've got the best line-up we've ever had and once again, we've got an incredible representative array of nominees and winners that cover the whole spectrum of artists, businesses and genres within the independent community in the UK. I'd just say to hold on to your hats, because it is going to be really exciting."

Have you incorporated any elements of the digital editions into the physical event?

"We looked at that, but we didn't go for a hybrid event because the reality is you duplicate your costs. We've made the decision to prioritise the experience of getting people together in person. The tickets to the live show and afterparty are really affordable. And my hope is that enables lots more AIM businesses that wouldn't normally come to the dinner - not that it's expensive, it's a break even event - to come and network, connect through the awards and have that moment together."

How has the AIM Awards evolved during your tenure?

"When I first arrived at AIM, the AIM Awards was a much smaller event. It was at The Brewery, which is a more corporate-style venue, and it was more of an internal celebration of the community. The journey the AIM Awards has been on over the last six years has been to bring it to much wider attention. In my first three years, we implemented our 'Road To The Roundhouse' strategy, which took the event from The Brewery to the Roundhouse successfully in 2019. Unfortunately, just as we thought we'd created solid foundations to build on, Covid struck, so we had two virtual years, but it now feels like we're getting back on track. If you look at the attention, the awareness, the coverage, the excitement and also the perceived value of the awards to the artists and the businesses that win them, I think we've added value to the significance of that moment to our community and to the wider landscape of music fans."

Why did you select The Libertines to close the show?

"It's a landmark anniversary for them - 20 years [since debut album Up The Bracket] - and they've obviously had that longstanding relationship with Rough Trade. Sometimes there is a danger of people in the wider world, assuming that independent music is somehow niche or boutique. And I think it's great to remind them from time to time that independent music is... we keep saying it's diverse, but that doesn't just mean it's niche, it means it genuinely covers everything. There are mainstream artists as well as very specialist and niche music, and I think it's great to show off that spectrum."

Do you feel the UK's independent sector is in a good place at the moment?

"Independent music is remarkably resilient. I was looking at some of the data recently and it reminded of the fact that irrespective of what happens in the acquisitions landscape - there are always acquisitions of independents by majors and other participants - the incremental market share in the UK has been growing 1% year-on-year. That shows a remarkable trajectory of growth. Independent music is strong and robust. It's diverse and it remains innovative and edgy. It embraces taking risks with that dynamic mix of passion and commercial savviness. One of the things that I'm really proud of is the AIM Awards has consistently has been a predictor of success - whether that's going back to Adele winning AIM Awards way before she was getting BRIT Awards, or Little Simz, who won Independent Album Of The Year in 2016, three years before she was [shortlisted] by the Mercury Prize. Also Dave, Jorja Smith, Idles, Phoebe Bridgers and Arlo Parks... the AIM Awards remains a phenomenal indicator of who's coming up and where the real innovation is happening in music."

What are the biggest challenges facing the indie sector at present?

"The last three years have been relentless, haven't they? If it's not Brexit, it's Covid, it's the industry facing inwards through the streaming inquiry... it's one thing after another. Now, of course, we're in the throes of the cost of living crisis and what could be very difficult economic times ahead. I hope that music remains counter-cyclical in the sense that, when people go through tough economic times, they find solace in music and so artists and music companies will be able to continue to invest and develop. But I think the single biggest challenge to independent music businesses remains access to capital. We see a lot of private equity money coming into our sector and buying up old catalogue. None of that money is going into new music and new artists and actually investing in the future; it's all doubling down on the past. My big concern is that we create pathways for creative entrepreneurs - whether they are artists themselves or growing businesses investing in supporting artists - so those people have access to capital on reasonable terms that they can use to grow businesses. I think the idea that massive investment comes into our industry just to take a bet on the past is a pretty depressing view. We need contemporary artists that reflect contemporary culture and society and shine a light on the pathway forward into the future."

As you come towards the end of your time at AIM, how do you reflect on your legacy?

"Gosh, that's a big question! I've done six years at AIM and when I took the job, I had a clear idea of what I wanted to do: the value I felt I could add to AIM in terms of the generational shift in the community and reframing, repositioning and recharging it for its next phase. And I believe I've achieved what I came to AIM to do and I want to go out on a high and pass the baton to someone with AIM in really good health. It feels energised: the level of expertise and knowledge - and the culture and values - of the team is phenomenal, and I feel proud to pass the baton to someone great to take AIM on for its next chapter. Six years feels really good; my concern was that nine years might start to feel a bit long."

And do you have a message for your successor?

"It's been a fantastic job and I'm excited for my successor because AIM is in the best place it's ever been. Member engagement is incredibly high, belief in AIM is high and the team is in a great place. Financially, it's in a really strong place and whoever comes in has the opportunity to take that platform forward."