'We create the conversation': Jamie Oborne talks The 1975, Dirty Hit and the ones that got away 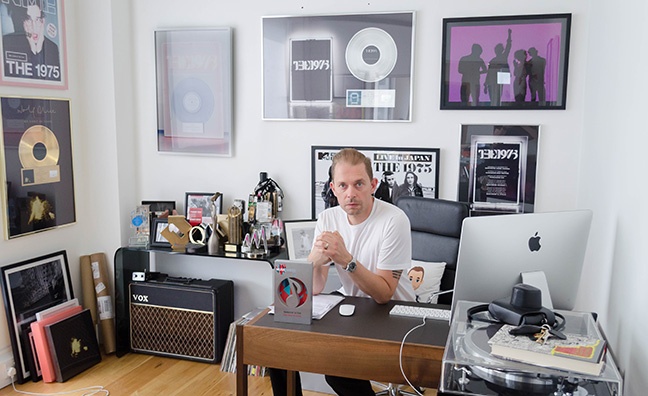 Jamie Oborne rolls into BBC Music Introducing Live 2019 wearing the look of a man who doesn’t quite know what to expect. Over the course of long and winding chat with BBC Radio 1’s Phil Taggart, the Dirty Hit and All On Red founder will deliver an update on the new 1975 record (“The next single is a fucking big song”), eulogise about Beabadoobee and Wolf Alice and talk about the artists that got away.

First though, he sits down and says, “I’m kind of nervous.”

It doesn’t last long, before you know it, the former Music Week cover star is on his usual form, telling a busy room that everything in his operation is “artistically led” and saying “I don’t really care what other people think”.

As always, what he says is frequently provocative. Asked to be specific about what he looks for in an artist, he merely says “voices that move me”, eschewing any fluff about genre or follower counts. “If you’re making music and you’re not saying anything with it now, especially, then there’s no point,” he adds, noting that social media culture and sensationalism has led us to a world in which people such as Boris Johnson and Donald Trump can profit.

Inevitably, The 1975 feature heavily in the conversation; in fact, Oborne is celebrating 11 years as their manager this week. We hear about the Myspace tip off and garage rehearsal, then he reveals that he drove up from London to Manchester to see them once a week for months on end in the early days.

I trust the artist always

“We have the same mantra now as we did then,” he says. “I impress upon Matthew the need to have objectives that are achievable every day, if you do that, then you travel a long way in a year. Thinking about doing is harder than the doing.”

Oborne bemoans, “the procrastination that distracts us” but has plenty of time for his artists’ obsessive tendencies. Take The 1975 and their upcoming new album Notes On A Conditional Form, for example.

“I got sent another new song last night. I’ve heard a lot of their music over the years, and it was another one of those moments of, ‘Where does this come from?’” he said. Then came the inevitable question: is the album finished?

“It’s not done, no. We forgot about life a little bit when we timelined it out, it’s nearly finished,” he says. “The beauty of our situation is that the record will come out when it’s ready. They’re never going to be rushed. However, we recognise when it becomes an unhealthy obsession, it’ll be mastered by the end of January. The next single is a fucking big song.”

The 1975 are never going to be rushed

They’ve clearly come a long way from the days when “no one in the music industry wanted to sign the band”. Oborne remembers “a toxic time” for Matthew Healy and the band, all of which sparked the decision to go it alone. This, the manager and label boss says, came about after several conversations with Korda Marshall, who told Oborne unequivocally to start his own label.

His ideals and perfectionist streak, not to mention lofty ambitions, meant it took a while to get going, but now he’s planning expansion into America – as revealed in Music Week – and dreaming of “becoming a big indie label in terms of the scale of the artists” and “offering a secure place for artists to develop”. The US operation, he says, will be run out of LA with the intention of “building a domestic label in the US like we have here”.

. @jamieoborne talks new @the1975 music: “I got sent another new song last night and it was another one of those moments of, ‘Where does this come from?’ The next single is a f***ing big song” @Introducing19 #the1975 pic.twitter.com/MAH0RSfIPa

Before he leaves the stage, there’s time to hear about a couple of the ones who got away.

“I loved London Grammar and tried to manage them quite aggressively twice and they chose someone else. I tried with Foals too, I think they were quite rude to me,” he says, breaking into laughter.

There’s no bad blood, though: Oborne says he often chats to singer Yannis Philippakis via Instagram.

And there you have it, ten or so years in music with Jamie Oborne. Tellingly, he answers the crowd’s questions at the end with the care his artists have come to know so well. “I trust the artist always,” he says. “90% of it is based on that, the other 10% is where you negotiate.”