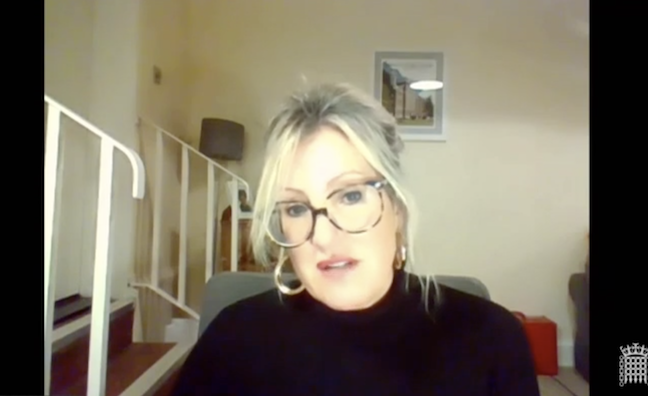 Artists and the wider music industry were unimpressed by Culture Minister Caroline Dinenage’s response earlier this week to a petition calling for visa-free touring in the EU.

Following the Petition Committee debate on Monday, during which Dinenage memorably said the EU’s offer on visa-free touring was “not consistent with Brexit”, she has now been called to give evidence in a one-off session of the DCMS Committee.

The session will take place at 10am on Tuesday, February 16 and is set to include:

Caroline Dinenage will be questioned about the government’s handling of negotiations with the EU, intended to enable visa-free travel for creative workers. Last year, her predecessor said freedom of movement for artists was “absolutely essential”.

It follows a campaign by artists, musicians and touring professionals to secure access to the EU without costly bureaucracy. Music Week has reported on the blame game between the UK and the EU in the past month.

At next week’s DCMS Committee session, MPs will also hear from representatives across the creative sectors, including music, theatre and screen, about what impact the failure to reach agreement is having on their industries as a result of an end to visa-free travel. As well as affecting artists and workers from the UK and EU, it also has an impact on transport of touring equipment.

The committee will consider proposals put forward by the industry as well as prospects for a government renegotiation with the EU and member states. On Monday, Dineage told MPs that “our door remains 100% open”.

In response to the debate, Tim Brennan said: “I was absolutely moved by the passionate speeches given by such a varied group of MPs from all parties. It shows that it’s not just those 283,000 signatories that have a real passion for live music and the creative industries – it is an issue that impacts everyone.

“I cannot say how very disappointed I am that the Minister’s words were so hollow and that she repeated the same old lines which we have heard time and time again. It is time for the government to recognise the increasing support and traction the ‘Carry on Touring’ campaign is getting from Parliamentarians, industry professionals and the public, and realise they need to go back to negotiate with the EU and give us the clarity we need to be able to carry on touring.”

David Martin, CEO of the Featured Artists Coalition, said: "Are we really at the point of claiming that a functioning and thriving music industry in the UK is at odds with leaving the EU? If so, that is a staggering admission. Artists, songwriters, producers, managers, musicians, crew, festivals, venues, promoters, labels in the UK, plus countless others employed and engaged across our industry are simply not going to lie down on this issue.

“The government would be sensible to recognise that this matter will not go away and that we will not be quiet. Beyond the enormous financial contribution of our industry (12 times more added to the UK economy in GVA than fishing, in 2019), our status, global recognition and wellbeing are reliant on the UK's music industry, and the social value that it is responsible for is immeasurable. It is engrained in our DNA.”

He added: “Whilst the FAC continues to engage with government to find short-term solutions to the myriad of problems caused by the UK's current regulatory position, it is not enough to simply say ‘the door is open’. The UK government must be proactive in engaging European counterparts, both at EU and at individual member state level. The current levels of frustration seen across the industry and in the public, will only grow if government remain passive and do not actively pursue credible and realistic solutions."