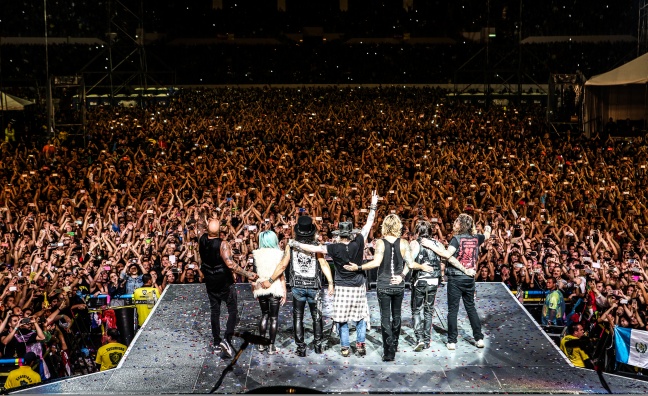 Former Guns N'Roses manager Merck Mercuriadis has spoken to Music Week about the band's blockbuster Not In This Lifetime... reunion tour.

Hipgnosis Songs boss Mercuriadis, who left the GNR fold in 2006, managed the Axl Rose-fronted rock legends for several years during guitarist Slash's exile from the group. Mercuriadis stars on the cover of the new edition of Music Week out now.

Slash announced his return to the band alongside fellow original member Duff McKagan in January 2016 following a 20-year absence.

“The reunion was always a possibility because Axl [Rose] was open-minded to it," said Mercuriadis. "All he ever wanted was for Slash to apologise for certain things and while Slash was in a position where he maybe didn’t understand that was what was necessary, then the band were never going to come together.

"But at some point it was inevitable that they would have that conversation and Slash would be able to have his say, because there were things that he wasn’t happy about."

Axl was always protective of Slash and the other guys in Guns N'Roses, there were just certain things he wanted to be put right

Beginning in April 2016 the Not In This Lifetime... tour, which reunited original members Axl Rose, Slash and Duff McKagan, became the second highest grossing of all-time, generating $563.3 million (£436.8m) from 159 shows.

"Axl was always protective of Slash and the other guys in Guns N’Roses," said Mercuriadis, who stars on the cover of the latest issue of Music Week. "There were just certain things that he wanted to be put right. They obviously figured out how to put them right and it’s been incredibly successful.”

The manager, who now represents Nile Rodgers, was at the GNR helm during the protracted recording process for their long-delayed Chinese Democracy album. The record was eventually released in November 2008, two years after his departure, and Mercuriadis has nothing but good things to say about its creator.

“I’m in the Axl camp," he said. "I’m not denying how great Slash is, but the guy that is the ethos of Guns N’Roses is Axl. The thing with Axl was that he knew what he wanted but he also knew what he didn’t want. As difficult as that seven or eight years of commitment to an artist can be, it’s just because he’s as committed to it as you are and he will not compromise.

"When you’re that successful you have the machine that only wants one thing out of you, which is a product that they can sell. My job as the manager was to make sure that he didn’t have to turn that product [Chinese Democracy] in until he was ready. My job was to protect Axl and make sure that he got what he wanted, not having to compromise to the rules of the rest of this business."

Click here to read the full interview with Mercuriadis and here for his recollections of his time working with his most famous former clients...