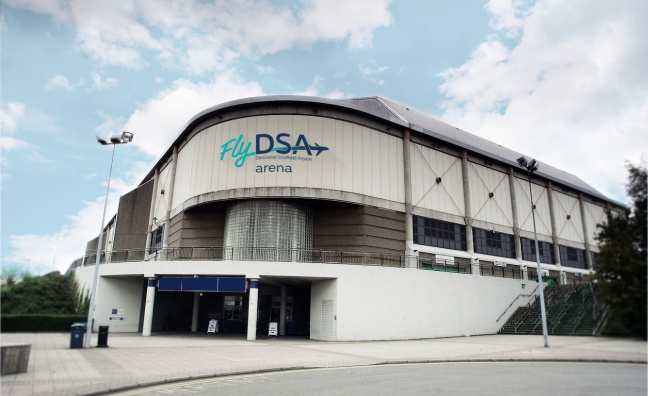 Sheffield Arena has been renamed as the FlyDSA Arena as part of a six-figure naming rights agreement with Doncaster Sheffield Airport (DSA).

The initial three-year deal will see the two organisations work in close partnership to promote not only the airport and the venue, but also the wider Sheffield region.

“We are absolutely delighted to be working with DSA on this new chapter of the arena’s history," said Sheffield City Trust deputy chairman Alex Pettifer. "Both DSA and the arena are integral to the region’s economy and the significant contribution from both organisations supports the continued growth of visitor’s to South Yorkshire, from across the county and further afield.

"This is a brilliant example of positive collaboration between two integral local businesses and we look forward to welcoming visitors to FlyDSA Arena very soon.”

The FlyDSA Arena will undergo a major overhaul of all venue branding and the agreement will also include a rebrand of tickets sold across the ticketing network, all leaflets, posters, venue signage and advertising to FlyDSA Arena.

Opening in 1991 as Sheffield Arena, the 13,500-capacity venue was known as the Hallam FM Arena from 2002-07, before reverting to its original name. It was also known as Motorpoint Arena Sheffield for a five-year spell. Future shows include Little Mix, The Killers, Phil Collins and Katy Perry.

The venue's general manager Rob O'Shea recently stepped down to focus on his event promotions firm, Manifesto Events. He was succeeded by his former deputy, Joe Waldron.