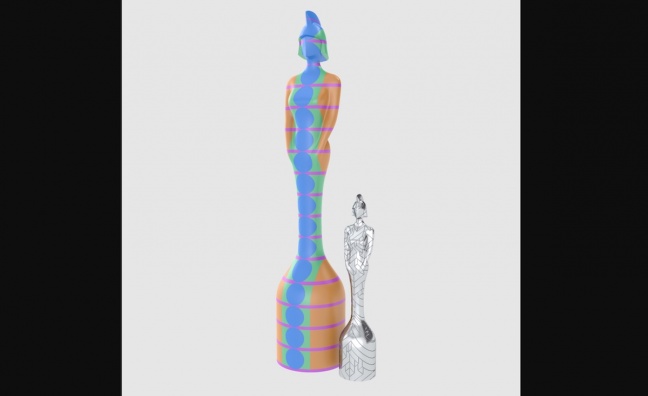 The BRIT Awards with Mastercard has released the first official images of the 2021 BRIT award, which has been designed by Es Devlin and Yinka Ilori. The trophies will be presented to winners on the night of May 11 at The O2 arena in London.

The BRITs first collaborative double-trophy design will this year for the first time incorporate two very different and visually striking statuettes, with each winner encouraged to award the second smaller trophy on to someone else, such as a family member, friend, neighbour, colleague, fellow artist, key worker, or another person important to them.

It follows a legacy of unique and bespoke designs over the past decade by some of the UK’s most celebrated creatives, including Dame Vivienne Westwood, Sir Philip Treacy, Tracey Emin, Anish Kapoor, Dame Zaha Hadid and Sir David Adjaye.

Speaking for the BRIT Awards Show Programme, Es Devlin said: “Yinka and I thought that the best award that one could receive would be agency to award another... Each recipient is invited to award the second trophy to someone they consider worthy – it might be recognition – or it might be someone that does something entirely unrelated to music.”

Yinka Ilori added: “The idea came from the experience of lockdown, where your neighbour you’ve lived beside for six years and never say hello to suddenly gave you flowers, foods, acts of kindness. I wanted to capture that... I would describe it as two artists from different disciplines, different inspirations, coming together to design a trophy based around the idea of giving something back – acts of kindness.”

The co-creative direction of this year’s award sees the larger statuette encased in Ilori’s signature colour palette inspired by his Nigerian heritage; in his words, “an explosion of colour... a nod to my aesthetic, based around my storytelling theme”.

The smaller statue is described by Devlin as “engraved with the maze pattern that celebrates the paths many of those working within the creative industries have had to tread in order to progress through this challenging year”.

The BRIT Awards last week announced that it will be the first major indoor music event to welcome back a live audience – with 2,500 tickets gifted by the recorded music industry to frontline heroes and their guests via a ballot (which has now closed). The indoor ceremony and live show will form part of the government’s scientific Events Research Programme, using enhanced testing approaches to examine how events can take place without the need for social distancing.

The ceremony will be exclusively broadcast on ITV and ITV Hub and hosted by Jack Whitehall. Nominations were unveiled last month with Arlo Parks, Celeste, Dua Lipa, Joel Corry and Young T & Bugsey all receiving three nominations each, and AJ Tracey, Bicep, Headie One, Jessie Ware, J Hus all up for two awards.