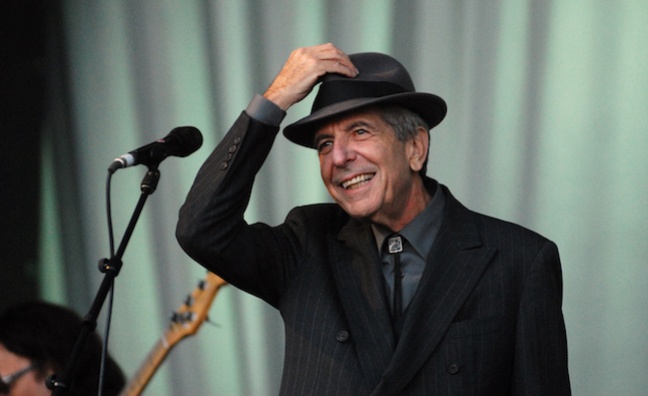 Leonard Cohen has been honoured at the BBC Radio 2 Folk Awards in Manchester.

Three years after his death, the revered songwriter and poet (pictured at Glastonbury in 2008) was inducted into the Folk Awards Hall Of Fame during the ceremony at Bridgewater Hall.

A posthumous Cohen album is due for release by Columbia next month. A documentary about the Canadian singer’s relationship with Norwegian muse Marianne Ihlen is currently on BBC iPlayer.

As a tribute, Thea Gilmore performed Cohen’s 1984 song Dance Me To The End Of Love during the Folk Awards. Cohen joins artists in the Hall Of Fame including Nick Drake, Sandy Denny, Woody Guthrie, Ewan MacColl and Cecil Sharp.

The event was hosted by Mark Radcliffe and broadcast live on Radio 2 and BBC Sounds. It was produced by 7digital.

Lewis Carnie, head of Radio 2, said: “A huge congratulations to all of the winners at the Radio 2 Folk Awards tonight. I am delighted that at Radio 2, we can keep celebrating the very best of folk music every year, and we’re honoured to have witnessed such an array of sensational performances on stage this evening in Manchester.”

Shane Mitchell from Dervish said: “We are thrilled and so delighted to be receiving this very special honour at the BBC Radio 2 Folk Awards, particularly as this is the 30th anniversary of the band.”

During the evening, contemporary folk musician and singer Maddie Morris was presented with the BBC Radio 2 Young Folk Award.

Best Original Track - presented by comedian, writer and musician Rich Hall
I Burn But I Am Not Consumed, written by Karine Polwart and Steven Polwart

Best Album - presented by musician and songwriter Graham Gouldman, of 10cc
Hide and Hair by The Trials of Cato