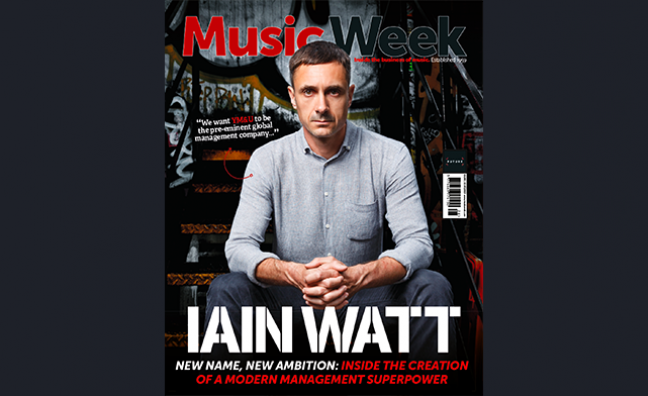 The new issue of Music Week is out now as we welcome management heavyweight Iain Watt to the cover.

Watt, whose guidance helped the likes of Clean Bandit, Years & Years and Mika to the top, is now MD of superpower YM&U’s music division, having sold his Machine Management business. In an extensive interview, Watt reveals his ambitious plans to take on the world.

Also in news, we speak to Gerry Cinnamon's booking agent, CAA's Andy Cook, who discusses the singer/songwriter's incredible live success, and Radio X's Mike Walsh and Gordon Smart, who have championed the star from the start.

In addition, we speak to D2C platforms about how PledgeMusic’s demise has altered the online retail landscape.

Ahead of the release of a brand new documentary on the life of Luciano Pavarotti, we speak to the late tenor's wife Nicoletta Mantovani, Decca’s Rebecca Allen and Dickon Stainer and promoter Harvey Goldsmith about where his remarkable legacy goes from here.

Elsewhere, with the BBC Proms set to return to this Friday, we discuss the booming classical music scene with figures such as UTA’s Heulwen Keyte, Cuffe & Taylor’s Peter Taylor and Lucy Noble of the Royal Albert Hall.

In this week's Hitmakers, Tom Walker reveals the inspiration for his self-penned Top 3 hit Just You And I, while The Divine Comedy's Neil Hannon takes centre stage in The Aftershow and Scottish pop newcomer Be Charlotte is featured On The Radar.

Sync Story looks at the link-up between Fred Ashworth and the Wimbledon tennis tournament and Making Waves shines a spotlight on folk star Molly Sarle. Charlie Simmonds, bookings manager for London's The Dome/Boston Music Room is our latest Rising Star.