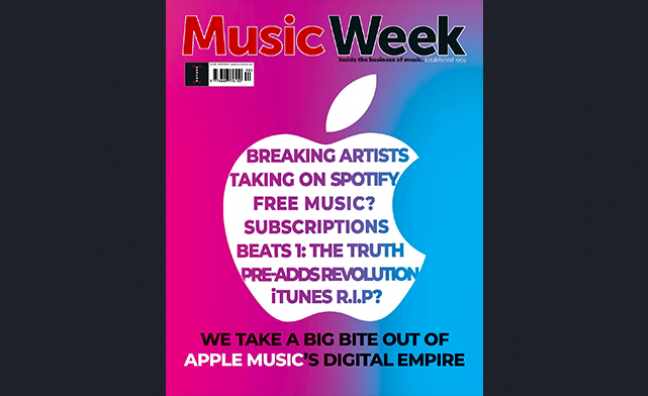 The new issue of Music Week is out now, and for our cover feature we take a big bite out of Apple Music’s digital empire. In a rare interview, Music Week checks in with its global boss Oliver Schusser to talk iTunes, the competition, the numbers and more…

Also inside, Music Week meets up with Robert Ashcroft, who has left PRS For Music after almost 10 years as CEO, to find out how he quietly revolutionised the performance rights organisation, while taking on the might of the tech lobby in Europe. Plus, Polydor’s Susie Ember takes us inside the Music Week Award-winning press campaign for The 1975 and looks to the future of the group…

In this week’s Big Story we take a look at the half-year tally for breaking artists and the innovative release strategies behind them.

Elsewhere, we speak to the Atlantic team to find out how Afrobeats superstar Burna Boy is going to breakthrough into the mainstream and we bring you news of the return of Music Week’s Tech Summit.

We tell the story of the one of the biggest pop hits of modern times in Hitmakers, as Guy Chambers reveals how Robbie Williams’ Let Me Entertain You was made.

There’s rock royalty in The Aftershow this week, as Status Quo’s Francis Rossi looks back on some of his life lessons in the biz.

Alongside all that, there’s the very latest news, charts, analysis and market shares.

The issue is available now. To subscribe to Music Week and never miss a vital music biz story, click here.