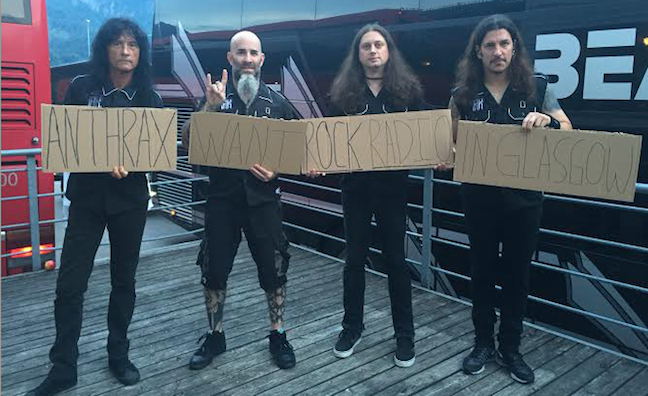 Anthrax, Alice Cooper and Papa Roach are among a number of high-profile rock acts to get behind Rock Radio Glasgow’s 96.3 FM license bid.

Since launching in the early ‘90s, 96.3 FM has undergone numerous guises. It was originally launched as Q96 - a local radio station to serve Renfrewshire - and has since operated as Rock Radio, Real Radio XS and most recently XFM. Many of the original 96.3 Rock Radio team are now working to bring Rock Radio Glasgow back as a sustainable independent station. Should its bid be successful, Rock Radio Glasgow’s output will consist entirely of local programming and a playlist that reflects Glasgow’s live music scene, supporting both emerging and established artists.

According to team RRG, Glasgow’s current local radio offering caters to a more mainstream audience, with much of its programming networked across the UK. Rock Radio Glasgow would cater to an audience that it says is currently ‘un-served by local radio’.

In addition to local rock fans, Rock Radio Glasgow’s bid has been firmly endorsed by several international rock stars, including Anthrax, Black Stone Cherry, Machine Head, Papa Roach, John Tempesta and La Fontaines, each of which have taken to social media to pledge their support (see below for a selection of posts).

Speaking to Music Week, Rock Radio Glasgow chief Ciaran O’Toole explained why the group decided to bid for the license. “I took an educated guess back in October 2015 that this FM radio license would be advertised by OFCOM in early 2016 and that it could be an opportunity to do something really interesting. Launching a Rock Radio station that is backed by music business professionals who would have a vested interest in ensuring the stations success in the market.

“Should we win, we have plans to create around 12 full time jobs and a range of freelance roles, we will be based in Glasgow city centre and the plan is to be on air in Q1 2017. If we are not successful, we have plan B. We are completely committed to bringing back Rock Radio to the West of Scotland.”

Rock Radio Glasgow faces stiff competition from a number of rival bidders. Bauer Radio is challenging to launch a hybrid rock/sport station, while bids from GO Radio and Original have also been tabled. The successful bidder is likely to be announced in September.

“We all live and work in the west of Scotland and have worked in the music industry for decades combined,” O’Toole added. “We're doing this for the artists, the audience and ourselves. We believe this is a moment in time to make something great happen on the radio again. Bring back rock radio to Scotland.”