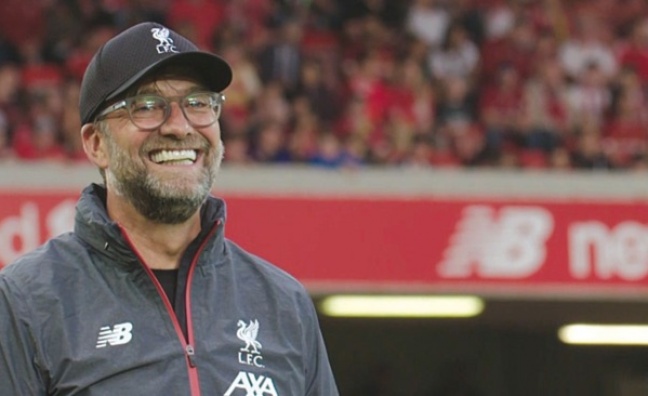 Liverpool manager Jurgen Klopp’s gleaming white smile has become very familiar to football fans in recent years and, with his team recently crowned league champions for the first time in 30 years, he’s happier than ever at the moment.

BT Sport sought to explore the relationship between team and manager in 30 Years Of Liverpool & Klopp, a celebratory film that tells the story of three decades over

Anna Calvi and David Byrne’s cover of Keren Ann’s Strange Weather from 2014.
The idea was to explore the various emotions of a 30-year wait, says BT Sport head of music Pete Kelly.
“We aim to tell unforgettable stories and music is at the heart of achieving that,” Kelly says. “This spot epitomises what we try to do with music on our channels.”

Producer Mark Utting believes the soundtrack is key to the film’s success. “When
I first heard the track I got goosebumps. It’s chilling and dark but epic and hopeful, capturing Liverpool’s ups and downs, false dawns and near misses, followed by glory.”

Tristan Wilson, head of sync & brand partnerships at Downtown Music Publishing, describes Calvi and Byrne’s cover as “mesmerising”, adding that BT Sport has “created a perfect home for the perfect song”.
Like a lot of Liverpool’s fans in recent weeks, many of the commenters on YouTube – where the spot has more than 80,000 views – have been moved to tears.

“It’s been great seeing a load of new Anna Calvi fans leaving comments on her YouTube page, too,” adds Kelly.

Every dream has been realised.
Every question has been answered.
Destiny threw Jürgen Klopp and Liverpool together.