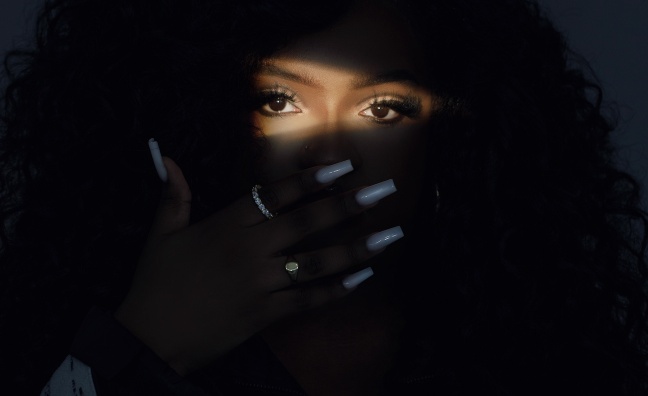 Music Week is teaming up with YouTube for the Women In Music Awards in October – Black History Month – with our second content offering and webinar event, The Legacy Series – Gifted And Black: Women In Music. Here, Music Week meets trailblazing teenage producer CeeBeeats, who has worked with AJ Tracey, Digga D, NSG and many more...

CeeBeaats is one of the leading female music producers in the UK hip-hop scene and, at 19 years old, is making a name for herself thanks to her work with AJ Tracey, Digga D, Diamond Platnumz, Young T & Bugsey, Headie One, NSG, Miss LaFamilia, Central Cee, Monique Lawz, Tiffany Calver, Cristale and more.

CeeBeaats is from Redbridge in East London and grew up in a musical household. Her mother has performed backing vocals for the likes of Mariah Carey, Gloria Gaynor, Florence And The Machine and many more.

Signed to Warner Chappell Music, she co-produced Digga D’s smash hit Woi at the age of 16, which has been viewed more than 22 million times on YouTube and accumulated more than 55 million streams on Spotify. The track received numerous award nominations, including MOBO’s Song Of The Year, and has 427,839 sales according to the Official Charts Company.

The masked producer has also made music for fashion campaigns by brands such as Ellesse and, earlier this year, took part in Mixtape Madness’ Beat The Clock challenge, in which producers are given three samples to choose from and have to come up with a beat in just 15 minutes. In 2020, she was included on GUAP magazine’s 30 under 30 Black Creatives and Professionals list.

Interviewed for Music Week’s Rising Star feature in November 2021, CeeBeaats is fast-becoming one of the most prominent new producers in the UK.

“She’s paving the way for female producers and, even at a young age, serves as an inspiration to women looking to make their mark in the industry,” Davis added.

Here, CeeBeaats lays out her vision for beat-making, charts her rise so far and explains how she intends to make an impact and bring through a new generation of women into UK rap…

If you could choose one word to describe your industry journey so far, what would it be and why?
“A word to describe my journey in the music industry would definitely be ‘exciting’. It all started with me making music in my home studio, and now I am getting to be in rooms with people that I’ve always wanted to work with. A recent example would be working with Diamond Platnumz; creating music and vibing with an artist that I’ve been listening to for years was a surreal experience. I’ve also been working with artists such as Midas the Jagaban, Headie One, Tay Iwar, and more. Seeing where my journey has taken me so far in such a short span of time compared to other young musicians in the industry makes me feel really grateful.”

What has been your hardest moment or challenge so far and how did you overcome it?
“The hardest moments and challenges I’ve had so far have been to do with having to be patient. I’d say this is probably quite a common experience in the producer community, where you’re often waiting for release dates for projects. There are times where the process will make you wonder, but the more I learn, the more I realise that those that are in control are just planning for the right timing, which is something I definitely agree with. This understanding has helped me to overcome those impatient moments of by remembering that I have to focus on enjoying the journey. When you just focus on making the most of the process, everything else falls into place.”

Are there enough women in your area of the industry? Have you seen any changes in terms of inequality in studios and in sessions since you've been making music?
“I don’t think there are enough women in my area of the industry, I'd love to see more female producers, managers, A&Rs and so on. I haven’t personally experienced any inequality in studio sessions, but if I was going to give any advice it would be to communicate with the person [involved], because sometimes it could just be a misjudgment of character because you’ve never worked together before, or many other reasons.”

Who are your role models in music, and who inspired you to pursue it?
“My inspiration in music definitely comes from my mother. She’s an artist, singer/songwriter and producer as well as my manager. As soon as I heard her produce, I was instantly hooked and decided that I wanted to become a producer. She didn’t hesitate and began to teach me and help develop my skills and here I am today, 10 years later. I grew up in a very musical household, listening to Missy Elliott, Aaliyah, Jon B and more, so that also inspired what I make now.”

When you signed to Warner Chappell you spoke about the female leadership at the company. What has it been like to work with the team there?
“It’s been an amazing experience working with Shani [Gonzales, MD], Amber, [Davis, head of A&R] and the rest of the team. They’re very supportive and give me guidance when I need it. They're also very active in getting sessions and sending out my beat packs frequently. They’ve also taught me the importance of networking in the industry and introduced me to new people. Really, it has turned out to be everything I expected and more, and I feel so blessed to have a team of such powerful women around me. Susie Woodbrige, who is another A&R, is always sending me opportunities for camps and I must also shout out Darryl Parkinson who is also very active in the A&R team. Everything just works so perfectly because I see things from many different perspectives with their experiences. I’ve realised that, when you work hard, there is no limit to your dreams.”

UK Black music is in a golden era, what's it like to be part of it?
“It’s an amazing thing to be a part of UK Black music. I feel Stormzy’s Mel Made Me Do It music video really highlighted the golden era we are in, and it’s so lovely to see and be a part of. There’s so much amazing talent on the inside. Because I’ve had sessions with lots of up-and-coming artists, I can say that there is a lot of new talent around right now. The music scene, especially Black music, is in good hands!”

I’ve realised that, when you work hard, there is no limit to your dreams

What is the secret to a great production?
“Every producer has their own formula, and while I believe that works, I don’t really use one. The main reason is because when I’ve used formulas in the past, I’ve realised that it limis my creativity, so I now have a more open mind when making music. When I’m in studio sessions, I’ve noticed that some artists like to go with the flow and experiment with whatever ideas I have in mind at that moment. My aim is always for the collaboration to be successful and for the artist and their team to love the end results.”

Last time you spoke to Music Week, you talked about pushing boundaries and not being afraid to stand out. How do you feel you've pushed boundaries over the last year?
“I feel that I’m more sociable now, I was very shy in the beginning. I’ve also extended the amount of genres I can produce such as Amapiano, dance and UK Garage, and that has led to some great moments, new opportunities and getting to work with some amazing artists.”

What does the industry need to do to ensure that more young women come through? And how can you be a part of it?
“I feel that there should be more female songwriting camps to open up more opportunities for producers, artists, engineers and women in other roles. Camps allow women in the industry to network and create new relationships, which is so important to keep the new generation of creatives going. A few years ago, I created something called the Ceeb challenge on Instagram, where undiscovered talent can rap or sing on my beats. I then highlight their videos on my profile and my followers  choose who they want to win. There is a prize for the winner, and any new talent is more than welcome. I will be doing another Ceeb challenge soon, so look out for instructions on how to enter.”

Do you have a message for any young women looking at you and thinking, 'I want to do that...'?
“I would say that, if you really want to do something, be consistent, even if it takes you years to achieve your goal.”