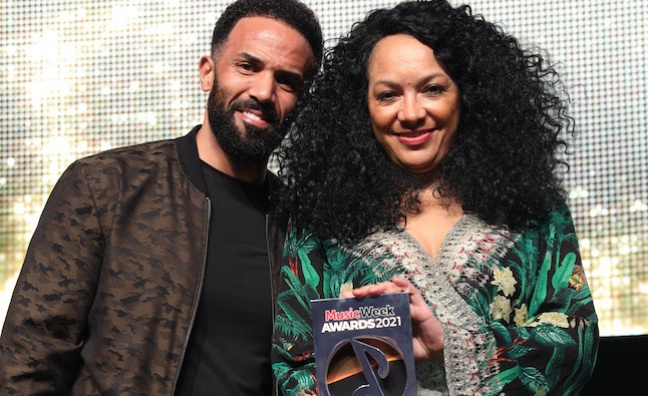 A host of artists and execs lined up to salute Kanya King, as she was presented with the Strat Award at the Music Week Awards.

The Strat is presented to an industry icon and King has been recognised with the honour in the 25th anniversary year of the MOBO Awards. She is the first woman of colour to win the award.

As well as being presented with the award by Craig David, the audience at Battersea Evolution got to see a MOBO film that described Kanya King’s incredible journey.

In the mid-’90s, at a time when Britpop was dominant, the record industry did not fully understand Black music.

“There weren’t really any channels for us,” explained Roni Size.

“I thought that who I was destined to become was who I decided to be,” said King. “MOBO was founded because I wanted to give Black music culture a platform.”

The MOBOs has continued despite the challenges of the pandemic, including partnerships with the BBC and YouTube.

Artists and executives including former Strat recipient Darcus Beese, Ray Blk, Jazzie B, Jason Iley, David Joseph and Max Lousada (another Strat winner) appeared in the film screened at the Music Week Awards to recognise the achievements of Kanya King.

Here’s a selection of the tributes…

Jazzie B, Soul II Soul
“I’ve got to say thanks to Kanya and all the work and effort that she did at that time and for giving us that award, because I do believe that helped to put Soul II Soul on the map.”

Darcus Beese, EVP, Warner Music UK
“Trailblazer, innovator, originator, creator and groundbreaker - all of the above. Congratulations, you deserve it."

Ray BLK, artist
“Queen Kanya! Congratulations on your award, you deserve this and so, so much more. Thank you so much for giving a spotlight to Black British music, and for doing so when other people were afraid to. The new generation can only now copy and follow in your footsteps. You’re the trailblazer who started it all. We’re so grateful, thank you for your support, for me in particular and my career so far. I cannot wait to see what you and the MOBOs continue to do in the years to come.”

Estee Blu, artist
“The fact that she was able to grow this dream of hers into something that has been a staple in the British music industry for over 20 years is just phenomenal... Congratulations to you Kanya King for receiving the Strat Award. It means so much to me and our community to see you elevated. We’re 100% behind you because of all you have given to us.”

Dawn Butler, Labour MP
“Kanya will decide that she’s going to do something, and she will do it. And there’s nothing much that will hold her back... Kanya, my good friend, congratulations on your Strat Award. It’s well deserved and it’s long overdue. I’m hoping that this will elevate not just you but the MOBO Awards to where you want it to be. I know that you’re driven, I know that you have a vision of where you want things to go. Just to let you know that we’re all here supporting you and cheering you on. Congratulations, and I look forward to seeing it on the shelf with all the others.”

Helen Grant, Conservative MP
“Kanya is a real champion of diversity and inclusion. In doing the work and all the effort that she’s put in, she really has changed and improved the lives of so many people. And that work is continuing... I’m proud to know you and to work with you. This very prestigious award is so truly deserved.”

Jason Iley, chairman & CEO, Sony Music UK
“Congratulations Kanya on your Strat Award - an amazing achievement. The word trailblazer is often bandied around these days. But if you look at what you’ve achieved, you’ve never taken no for an answer, you’ve always pushed the boundaries, you’ve always reached for the stars. I’m truly and utterly delighted for you.”

Jermain Jackman, artist
“If it wasn’t for Kanya King, I would never have been on The Voice UK. She got me in front of those exec producers to hear my voice, see my talent and know my character. I’m forever grateful to Kanya King for that... Kanya, well done and congratulations on your Music Week Strat Award, it’s well deserved.”

David Joseph, chairman & CEO, Universal Music UK
“What happened with that idea [MOBOs], is that it went to go on and shape culture in this country. That is absolutely extraordinary! I’m so thrilled tonight that you are getting this award for music, because that fundamentally is everything about you and it’s who you are. All our conversations are based around what’s new, who’s the new talent, what’s the new song. And you provide the stage, and you give them most often the first chance they’ve had to perform on a huge stage in their career. They have gone on to, literally, headline festivals and have their music spread all around the world. So I just want to say, your dream came true. You had the idea, it shifted culture and you’ve changed the lives of so many people.”

Max Lousada, CEO, recorded music, Warner Music Group
“Congratulations on your Strat Award, very much deserved. Your passion, your execution, your championing of British Black music is truly undeniable. The platform that you’ve given to music of Black origin is valued amongst the artist community, the industry and the global entertainment space… Your energy, your verve, your determination has always been outstanding. This is a right and overdue accolade.”

Naughty Boy, artist & producer
“I remember seeing Kanya on TV and thinking, I just know that that is one powerful woman… Congratulations Kanya on your Strat Award, it’s so deserved and here’s to the next 25 years. And the 25 after that!”

Eunice Obianagha, MOBO
“From myself, the rest of the MOBO team, the multitude of people that you have impacted through the MOBO organisation, thank you Kanya. We are super-duper proud of you.”

Jonathan Shalit, chairman, Intertalent Rights Group
“What you’ve achieved is quite remarkable. You have literally helped thousands of people around the world, through the MOBO organisation, have better careers and better lives - because of you Kanya King.”

Skin, artist (Skunk Anansie)
“I just want to say congratulations. Nobody deserves this award more than you do my love. Congratulations on your Music Week Strat Award.”

Tinie, artist
“I just wanted to say a massive congratulations on your award. Thank you for always recognising and supporting UK talent. We appreciate you. Love.”