Shani Gonzales on the 'new energy' behind Warner Chappell UK 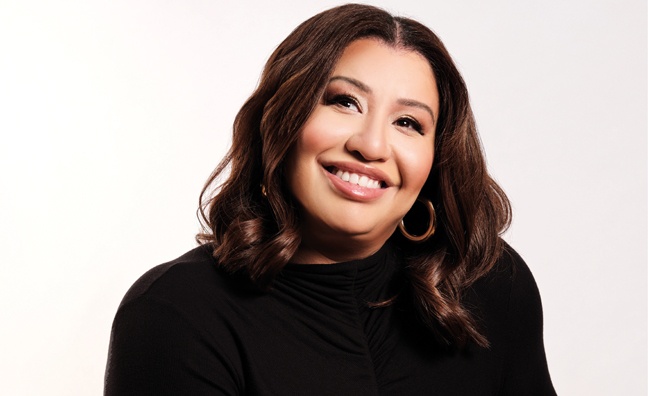 Shani Gonzales has told Music Week that she's building a publishing company works like no other, with a strong focus on diversity and a new approach to A&R.

Gonzales took on the Music Week Interview to mark her first anniversary as Warner Chappell's UK MD, a post she took up last October, alongside her continuing role as global head of A&R. The former BMG executive faced various Covid-related obstacles in the first year of her tenure, building up a head of steam nonetheless with a raft of new signings including Central Cee, Emma-Jean Thackray, Shaznay Lewis and more.

The MD was among the attendees at Music Week's Women In Music Awards last month, where she presented All Saints star Lewis with the award for Inspirational Artist.

"I started this role with a bit of a cheat sheet," Gonzales told us, looking back on her UK story. "I was spending a load of time in London and I got in early with some good people and they got really successful! [Laughs]. I got to be close with [0207 Def Jam’s] Alec and Alex Boateng, Char Grant is somebody I worked with at my previous company, I’ve known [Dave’s managers] Jack Foster and Benny Scarrs for a while and Joe Kentish. President Joe is just Joe to me, just Joseph! So I came in with a load of support, people who were committed to helping me, it’s fun when you get to work with your friends.”

She also singled out her A&R team, led by Amber Davis for special praise.

"I think we definitely have the best A&R team, hands down," Gonzales said. "I will go to battle with any other publisher in this country! Put us in a mud wrestling match and I swear to God my A&R team will [win], they’re amazing.”

Here, in an extract from our conversation, she talks about the differences between the business in the UK and the US, Warner Chappell's integrated approach to A&R and more...

Is the approach to publishing different in Britain?

“Publishing in the UK is a lot more passive than it is in the US. There are times when I want to tone my American-ness down because I want to make sure I’m respectful of the culture and the climate that I’m in, but there are other times where I’m like, ‘Fuck that, we’re gonna tone the American up.’ I’m not passive, and the way that I’ve had success in publishing has not been to be like, ‘Here’s a cheque, let us know when you need another one.’ I’m always telling people, ‘Don’t think you’re getting a cheque from us without loads of opinion and people who want to be your partners. We want to build a relationship, partner up with you and be impactful, we are not entitled to any success that we didn’t earn. We want to be a formidable partner and make an impact. There are a lot of run-off effects from that, we’ve got closer with the A&R community at the record labels, they are seeing what we’re doing and are inviting us into their planning meetings and coming to us for opinions and for songs, because our writers and artists respect the things that we’re doing and are spreading the word.”

Is it rare for labels and publishers to work so closely?

“It seems to me that it is. For us within the Warner ecosystem, I’m always talking to Tony Harlow and he’s been very supportive. But it’s not a difference for me, I’ve always picked up the phone. It seems to me that it is different to have a publisher that is so integrated in record labels, and beyond Warner too. We have incredible partners with Celeste at Polydor, with Stormzy and Alec and Alex [Boateng] at 0207 Def Jam. To me, that is the only way to do publishing. If we’re not doing it that way, what the hell are we doing?”

How do you feel about the competition?

“What competition? Who? They’re still around? I’m joking! [Laughs]. Competition is healthy. I don’t know a lot of our competitors perhaps as much as I would if we were all out at industry events and talking at shows. Clearly we’re not all across the room throwing rocks at each other, you get to know people. I only know everyone by their reputations and people have amazing reputations and I respect them, but I love that even more, because it’s that respect that makes you want to blow them out of the water. I don’t want to say that we’re blowing everyone out of the water, but I think the creative community feels the energy that we have and feels how different it is.”

What are you looking for in new signings?

“Diversity. We signed Emma-Jean Thackray, she’s amazing. It wasn’t an easy signing and didn’t necessarily make sense on paper, but she was brilliant. She is just as much a part of youth culture as Central Cee. That speaks to the new Warner Chappell, it was done by me and Ayla [Owen] who loves her just as much and was pressing me. I went to see her with our global head of film and TV, Rich Robinson, and it was the most amazing show. I left there with £200 worth of merch! I use her as an example because she’s maybe not the most typical thing that people would know about, but I love that we signed her before the album and watched people become fans and could say, ‘Yeah, we’ve been a part of this, we left our mark, we came through with some syncs.’ It’s the same thing with Celeste. They’re two different artists, but the same fingerprint of different departments working together to tell the story from A&R, to film and TV, to creative services. I also got to be a part of re-signing MNEK. He’s on top of the world. He’s showing us how to be a songwriter, you don’t just write a couple of songs, you have a voice, you have a formidable presence. You sometimes feature on a record and you become a big proponent in your community for diversity and sexual orientation. That’s what I’m interested in, people like that. He’s not like [meekly] ‘I’m a songwriter,’ he’s like, ‘I’m a fucking songwriter.’ To me, publishing is a roster of interesting voices and people who you partner with to tell their story.”