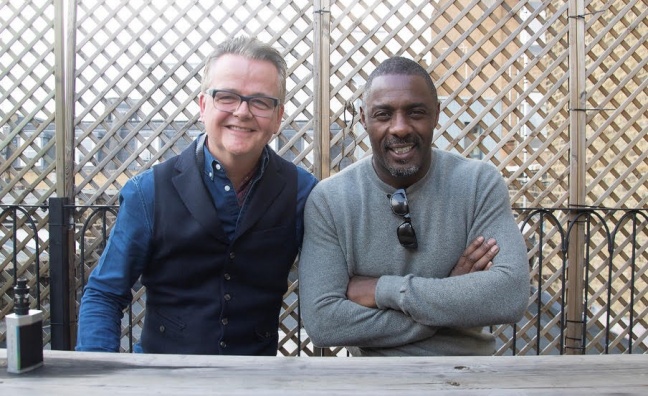 Best known as an actor, Elba is also a musician, songwriter, producer, director and DJ. He co-wrote, rapped and sang first single, Boasty, created with Wiley, Stefflon Don and Sean Paul. The track has amassed 22 million YouTube views to date.

Elba’s other songs include his mix of Circles by Natalie Wood X N:Fostell; a remix of Shy’s Chocolate; and, most recently, new single Ballie, a new collaboration with Kah-Lo. In addition, Elba has new collaborations with the likes of Kranium, Slick Rick, Tiggs Da Author and a forthcoming single On Life, co-written with Poo Bear which has also been remixed by David Guetta’s alter ego Jack Back.

UMPG UK MD Mike McCormack (pictured, left) said: “Like countless other folks, I’ve been a fan of Idris through his acting roles for years with The Wire, Luther and Beasts of No Nation, among others, so when I first heard and loved Boasty a few months ago and found that Idris had remixed and rewritten the song, it was my top priority to sign him to UMPG.

“Now Boasty has become one of the hits of the year, and I’ve also gotten to experience Idris’ incredible and relentless work ethic, his boundless charm, and that passion with dedication to succeed as much in music as he has with his acting career. Idris’ musical/DJ aspirations are so big, it’s a great fit for our global company as we can support his vision and ambition worldwide.

“It’s also a pleasure to be working with Katy and Garry at Anglo Management with whom we have a long and productive relationship.”

UMPG will also sub-publish artists signed to Elba’s record label, 7Wallace. Created in 2015 and based in London, 7Wallace’s recently releases include James BKS Kwele, Elba’s Badman and the 7Wallace Sampler, among others.

Elba’s manager, Katy Ellis of Anglo Management, said: “Teaming up with Mike McCormack and his team was an easy decision. Idris’ songwriting ambition and drive knows no boundaries and requires a strong and openminded team that can help us deliver his ambition, and Mike and his team get Idris musically. Really important is the strength of the relationship in the US where Idris is marrying his film and music, and we need the experience of a team that is used to working with international acts across film and music at the highest level.”

Elba will perform at Glastonbury on the Glade Stage this Saturday night.