On The Radar: Brooke Candy 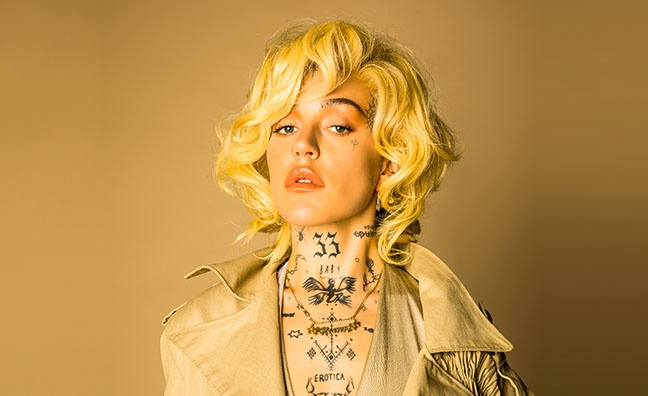 When Music Week catches up with Brooke Candy she is, in her own words, “incapacitated”.

Turns out she’s still recovering in bed after last night’s gig in LA: performing in the ring of an underground Mexican wrestling event where – among other highlights – she experienced being “body slammed”. It’s a brief but colourful insight into the life of one of 2019’s most exciting stars.

In late October, Candy finally released her debut album Sexorcism. A devout believer in the gospel according to Lil’ Kim, it mixes her XXXplicit rapping style with avant-garde, glitchy beats.

“I’m a no-holds barred, uninhibited feminist who is sexually free,” she offers when asked what the album says about her. “My music is to help free you. It’s queer, it’s feminine, it’s feminist – it’s everything that everybody wants to say but is too embarrassed. It’s meant to be fun, but it will always have a tone of overt sexuality, that’s a big part of who I am. It’s a healing process for me.”

If you already recognise Brooke Candy, it’s understandable. Originally signed to RCA – during which time she even collaborated with Sia – she eventually parted ways with the label in 2017.

“I’m covered in tattoos, I’m fucking weird, I’ve always sung about feminist ideals and sex positivity,” she explains. “Those things are trending right now, but when I signed to RCA that wasn’t the case. Music at that time was very homogenised and I think they were trying to pinhole me into something they knew worked. When it’s your time, it’s your time. And that definitely wasn’t my time.”

This year, however, things are different. Freshly signed to the London indie Nuxxe, Candy is enjoying full control of her career – including directing vivid videos for recent singles Drip and FMU.

“Certain artists are more vehicles than artists,” she says. “They need a team to create an identity for them. I have an identity I was born with that I’m very aware of. To direct my own videos, it’s just another way to express myself.”

And if we’re talking self-expression, you’re not going to mistake Sexorcism for anyone else’s debut. Its striking cover, for one, depicts Candy with six breasts and a giant lizard tongue (“I feel like it’s going to get banned, but that’s OK,” she grins. “The coolest things get banned”). While the album was initially teed up with the dark, confessional song Happy – and she is similarly candid about being bi-polar in conversation – Candy opted to change tack for her debut. “I’d like to be an artist that, regardless of what I feel inside, projects fun, positivity, strength and power,” she explains.

To help her in this mission, Sexorcism – which was recorded in a four day blur – features big guests ranging from Charli XCX (“I swear to God, she is single-handedly saving pop music”) to Iggy Azalea (“She’s really cool and really funny”). The resulting album boasts extraordinary levels of charisma on songs like Boss Bitch.

Candy’s positive message has not, however, always been fairly received. “I’ve gotten so much shit for just being who I am and making the art that I’ve made,” she continues. “There was a day in London and I must have got 2,000 death threats – I think they were bots or something – just ‘Kill yourself’ over and over. But that’s not going to stop me. I’m fine getting my boots dirty and putting out something that might have a terrible reaction, or an amazing reaction. I don’t care either way. Someone has to do it…”

And rest assured, no one is doing it quite like Brooke Candy.