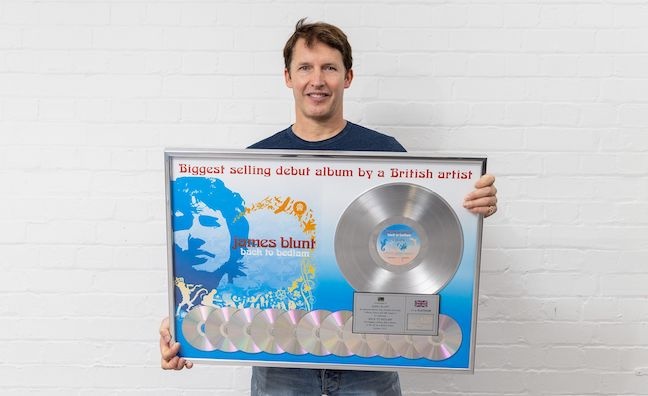 The chart has been compiled exclusively by the Official Charts Company in partnership with National Album Day. This year’s theme for NAD is debut LPs.

In The Official All-time Debut Albums Top 20, Meat Loaf’s Bat Out Of Hell, released in 1977, is revealed as hitting the top of this chart, which is based on UK sales and streams combined since records began in 1956. James Blunt’s Back to Bedlam at No. 2 is the biggest ever debut album by a British artist, and Leona Lewis at No.3 is the biggest debut by a UK female artist with her album, Spirit.

Laura Busson, commissioning executive for Radio 2, said: “Radio 2 is proud to support National Album Day by celebrating this year’s theme of debut albums. This chart is a wonderful reminder of the powerful records that launched so many stellar careers and are much-loved by our listeners.”

Bat Out Of Hell’s UK sales have topped 3.5 million, and it has spent more than 500 weeks on the Official Albums Chart despite only ever climbing as high as No.3, which it reached in January this year after Meat Loaf passed away.

Including his global hit You’re Beautiful, which topped the charts on both sides of the Atlantic, James Blunt’s Back To Bedlam spent 10 weeks at No.1 in the UK and was not only the top album of that year, but the biggest seller of the 2000s.

On discovering that Back to Bedlam is the biggest debut album in the UK by a British artist, James Blunt said: “Are you sure? There must have been some kind of mistake.”

At No. 3, Leona Lewis’ Spirit (2007) is one of three albums by female artists in the Top 5. Released the year after she won The X Factor, the album includes the No.1 singles A Moment Like This and Bleeding Love as well as her chart-topping cover of Snow Patrol’s Run.

At No. 4, Lady Gaga’s album The Fame (2008) includes her first two UK No. 1 hits, Just Dance and Poker Face. Dido’s No Angel (1999) is at No. 5, taking 20 months after its release to top the Official Albums Chart, with hits including Here With Me and Thank You.

At No. 6, Spice Girls’ Spice (1996) is the highest-ranked album from a group. Five of the record’s 10 tracks topped the Official Singles Chart, including their first three singles Wannabe, Say You’ll Be There and 2 Become 1, while the album spent 15 weeks at No.1 in the UK.

Alanis Morissette’s Jagged Little Pill was the UK’s top seller of 1996 and includes Ironic and You Oughta Know. Debuts by Keane, Sam Smith and Coldplay complete the Top 10.

The UK’s Top 20 debut albums of all time:

Geoff Taylor, chief executive, BPI & BRIT Awards, and Kim Bayley, chief executive Entertainment Retailers Association (ERA), the organisations behind National Album Day, said: “Releasing a first album is a landmark early step in the career of every successful recording artist, so to rank among the 40 biggest debuts of all time is an astonishing achievement. Each of these albums captures a moment in time when the artists behind them were first finding their feet. For some, their debut represented the apex of their career, but for others it was the start of a journey to even greater success.”

Martin Talbot, chief executive, Official Charts Company, said: “Congratulations to all of the artists on this special National Album Day chart. Any artist with an album successful enough to appear on this fantastic list, the Official Debut Albums Chart, will have come out of the traps at the beginning of their careers and truly hit the ground running. A debut album is, for many artists, the most personal album of their careers, the only album they spend their whole lives to that point making – so, to connect with the public in such an incredible way is truly impressive.”

BBC Four celebrates National Album Day tonight (Friday, October 14) with programming featuring some of the artists who are featured in the chart - Meat Loaf: In and Out of Hell, Mike Oldfield’s Tubular Bells, and Sam Smith’s Radio 2 In Concert from 2015.