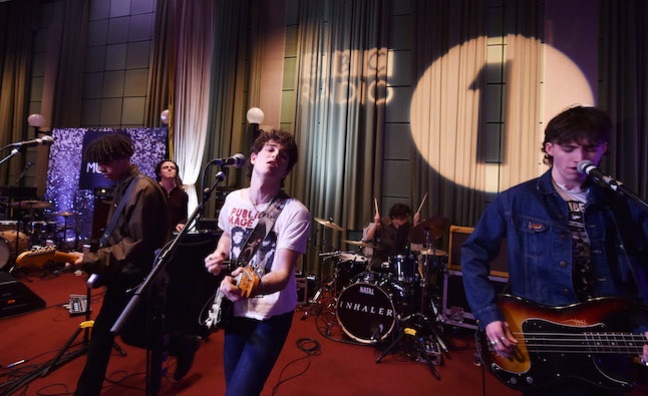 BBC Music’s Sound Of 2020 was celebrated this week with a recording for Radio 1 at the historic Maida Vale studios, featuring performances from some of this year’s acts.

Polydor-signed Celeste has done the double as winner of the BBC’s Sound of 2020 and the BRIT Rising Star Award. Artists recognised in this year’s BBC list include Arlo Parks, Beabadoobee, Easy Life, Georgia, Inhaler, Joesef, Joy Crookes, Squid and Yungblud.

Industry experts and fans alike filled the studio floor, huddling around each artist to witness their favourite songs up close and personal. Joesef and Squid kicked off the night striking a stark contrast in their musical styles, as Joesef’s smooth jazz tones offset the raucous Squid’s jagged guitars and ferocious vocals.

Beabadoobee jammed out to her bedroom grunge-pop melodies, while Joy Crookes soothed the crowd with her raspy vocal styling. Crookes was later joined by Jafaris for their track Early, and Easy Life were accompanied by Arlo Parks on their track Sangria.

Celeste held her audience as her soulful vocal filled the room with a rich and powerful soundscape. Audience murmurs could be heard in awe of the powerhouse singer, who was being compared to former BBC Sound winner Adele.

Irish band Inhaler fronted by Eli Hewson – son of U2’s Bono – stirred up anticipation in the crowd, and single Ice Cream Sundae had people chanting along.

We had a chance to sit down with the band, and chat about what it’s like to be part of BBC Sound Of 2020…

How does it feel to be tipped as a new artist in this list?

Ryan McMahon: “Considering we don’t have an album out, which is quite a mental thing.”

Rob Keating: “Yeah, and I think being an Irish band as well, it’s quite nice.”

EH: “I don’t think we’ve seen an Irish band that has been in it the last few years, there have been a few but not many which is really cool. Being in Ireland, we didn’t really hear of the Sound Of list as much so we didn’t really understand how big of a thing it was until recently, and we we’re all like ‘Woah!’. We’ve all been really impressed by that.”

Where do you hope it’s going to take you in your career?

EH: “I think this year we’re really going to go for it. I think last year we were finding our feet as a band, and people were starting to learn about us. But I think this year it’s time to be a great band, I suppose.”

How did growing up in Ireland influence your sound?

EH: “I think we listen to a lot of Irish bands like Thin Lizzy.”

EH: “It definitely shaped us in some way, but I think we were more shaped by the Manchester music scene. We got really into that and that’s what made us want to start a band, and we’ve kind of branched out more than that. I wouldn’t say our sound is uniquely Irish, but I think what it was good for was meeting each other. Because it’s so small there was a good music scene there and stuff. Bands like WhenYoung, The Murder Capital and Fontaines DC are all coming out now and everybody kind of knows each other. So it’s a scene now, which is really exciting.”

For other artists or bands that want to break through the industry, what advice would you give?

EH: “Just keep going really, because being in a band is full of really big highs and then really low lows, so if you can get past the lows then the highs are always fantastic.”

RK: “Good songs as well always thrive, because nothing beats really good songs. If your songs are good enough then you’ll get there soon enough.”

RM: “Yeah, I think the other thing is being a really good live band, and just testing out songs for the live audience because then you’ll know.”

EH: “We weren’t really a good live band for a long time but we had songs, so I think the challenge was trying to become a really good live band to support the songs. I think it was probably better that way than the other way round.”

What are some of your best moments so far?

Josh Jenkinson: “Playing in Mexico was crazy, that was a milestone.”

EH: “America, best two weeks of my life that was amazing. These lads had never been to America.”

RM: “It was crazy. I mean Eli said to us once that his vision of success was the four of us just cramming into a tiny little van across the American highway and we’ve done it now. So, now there’s nothing left to do… God forbid!”

How are you feeling about the Radio 1 show at Maida Vale?

EH: “The floor plan’s quite cool, it’s like Jools Holland.”

RM: “Yeah, that’s exactly what it is! This is our first Jools Holland. Yeah, but no all the other artists that are performing are amazing as well. Easy Life are great. Celeste is great.”

RK: “We’re doing a gig with Easy Life this year supporting Kasabian, and Sam Fender as well and we haven’t crossed paths with anyone else. But, Celeste is on the same label as us, Polydor, I think Yungblud as well so we do know a few of the names on the list, which is cool. Hopefully we’ll meet a few tonight.”