How Lewis Capaldi became the King of TikTok 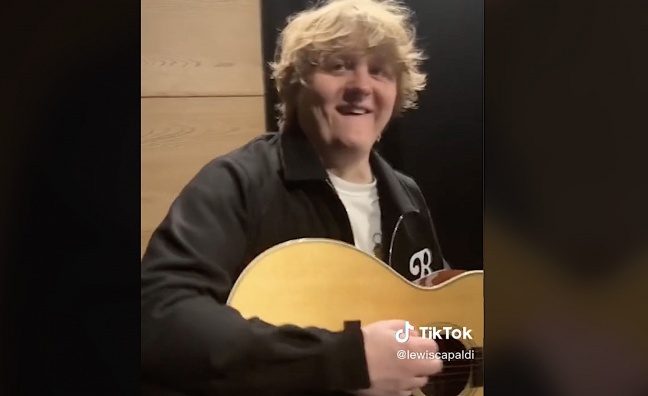 Lewis Capaldi and his team have spoken about the power of TikTok for launching a comeback.

The campaign for Capaldi’s second album Broken By Desire To Be Heavenly Sent (EMI - out May 19) has got off to a flying start with a No.1 for lead single Forget Me (468,098 sales to date - Official Charts Company).

The latest Music Week cover star is now set to debut inside the Top 20 with the follow-up track, Ed Sheeran co-write Pointless, on Friday (December 9) - a result which would likely have been Top 10 but for the influx of Christmas music.

The TikTok post announcing the single has 6.9 million views. Since joining the short-form video app in 2019, Lewis Capaldi has amassed 4.5 million followers with videos that showcase his brand of humour alongside the music. He may not be the most followed artist on the platform - Ed Sheeran (13m followers) and Sam Ryder (14m) are bigger British acts, for instance - but few can rival him for honesty and irreverence.

Capaldi launched his second album campaign via a TikTok LIVE from the first of his long-delayed headline concerts at London’s The O2 in September. The star debuted a 30-second snippet of Forget Me over the PA to the sell-out crowd and a global audience of six figures, marking the end of his near two-year hiatus from social media. A clip from the stage of that moment from The O2 posted on TikTok has 19.6m views.

Recent posts include Capaldi cavorting with a cardboard cut-out of Ed Sheeran (5.9m views), singing in a stairwell (10m), making a tirade against gyms (11.2m), and a self-referential post from an arena stage about trying to go viral (1.9m).

Capaldi joked about his arrival on the platform in 2019 with a bid to become the ‘King of TikTok’, although he took an extended break from the app the following year. The singer-songwriter only returned to launch comeback single Forget Me in September after an absence of almost two years from social platforms.

Speaking to Music Week, Capaldi described being back on social media as like “re-learning how to ride a bike” and noted that it is a key skill for artists.

“I see a lot of artists complaining that they didn’t sign up to be an influencer or whatever, but it’s just the way it is now,” he said. “The definition of an artist in the ’90s and early ’00s is drastically different to what it is now.”

Lewis Capaldi’s re-emergence has reignited his mega-selling first LP Divinely Uninspired To A Hellish Extent (1,404,920 sales, OCC), which rebounded into the Top 10. It is pushing for a Top 20 finish this week more than three and a half years since release.

Spotify streams of his transatlantic chart-topper Someone You Loved (4,595,885 UK sales) have marched past 2.5 billion. His monthly listenership on the service currently hovers around the 30m mark.

“We know that new music always feeds the old, so Forget Me is helping people come back to Lewis or discover him for the first time,” said EMI’s head of commercial and streaming Andy Knox. “The strategy going in was to keep it all about him and the voice, but also to keep it real and honest, which is what I think set him apart in 2018/19. We wanted to make sure it didn’t become something he wasn’t.”

EMI can reap the rewards of carefully laid plans, according to Knox, having reacted swiftly to the surge in streams during the summer.

“We feel really organised and ahead of ourselves, which we weren’t on the last campaign because we were chasing our tail the whole time due to the quick success of Someone You Loved,” he said. “Lewis was riding such a wave when he went away and it was a shame that he didn’t get to do his victory lap, but Covid cut that short. In other ways though, it gave him the chance to slow down and reflect, so to have him back now is amazing.”

EMI has deployed digital advertising and worked closely with fan-run social media accounts to bring Capaldi back into public consciousness. Knox also points to work done on TikTok and a sped-up version of Grace that went viral on the platform prior to Forget Me coming out.

“Lewis is the king of TikTok and the plan was always to get [his debut] back in the charts,” he says. “We did a Spotify Single a few weeks after Forget Me and there is a lot of life left in that song. Lewis is his best salesperson, so him actually grafting the songs and showing what he’s about will help drive them forward.”

I see a lot of artists complaining that they didn’t sign up to be an influencer or whatever, but it’s just the way it is now

TikTok unveiled its year in music this week, although Capaldi’s campaign really only got going in September, so he’s primed for an impact in 2023’s round-up. Video views for the #lewiscapaldi hashtag are approaching two billion, a number that’s set to soar with the new album.

Wasserman Music’s Ryan Penty, who guides Capaldi’s live career with Music Week Awards 2022 Agent Of The Year Alex Hardee, said the singer’s absence has only served to heighten his impact.

“The best thing he did was come off social media because then he didn’t have the pressure to try to be funny the whole time,” said Penty. “We’ve seen with many artists in the past where they’ve been everywhere and not gone away and people are like, ‘Oh my God, can’t they just fuck off for a bit?’ And he did – he fucked off for a bit – and now that he’s back, no one’s sick of him.”

Capaldi’s meteoric ascent on the live scene was stopped in its tracks due to Covid, but he returned this year for a slate of headline dates (most of them rescheduled from 2020) at Trnsmt, Isle Of Wight, Latitude and Lytham festivals, plus his twice-postponed shows at The O2.

As well as live and the digital strategy, brand partnerships are also increasingly important for Capaldi.

After memorable hook-ups with the likes of Greggs and Deliveroo on his first run, Capaldi launched his very own pizza range in late September in a brand partnership with Iceland and Tesco. He has also partnered with Guinness.

“We’ve got some plans, I’ll do anything for money,” joked Capaldi.

The Scottish star is also looking ahead to the writing process for his third album.

“We did a song with Max Martin called Leave Me Slowly, which is very ’80s,” he said. “He’s an intimidating man. He’s very nice, but you’re like, ‘Fuck, that’s Max Martin!’ We worked with a few of the Swedish lot and I think, for the next album, I’d like to go back and forth to Sweden. They’re a cool bunch and they’re good at writing songs. But what I loved about it was I didn’t expect to come out with the song that we came out with. It sounds like an ’80s high school slow dance banger, so that’s an interesting thread to pull at when the time is right.”