Robbie Williams: 'When Oasis get back together they won't sell as many tickets as Take That' 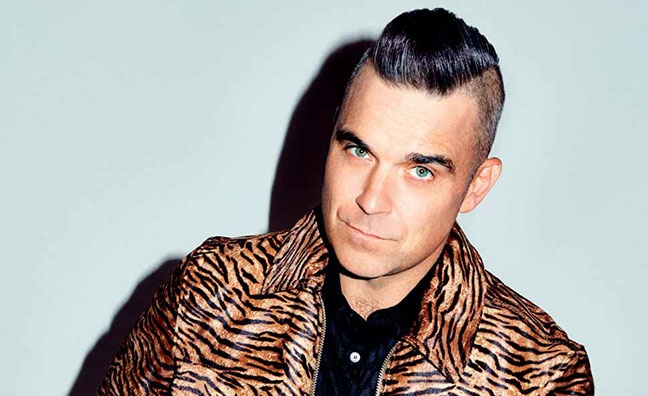 Robbie Williams has spoken to Music Week about his record-breaking Progress tour with Take That – and confirmed he is open to another reunion down the line.

The 2011 stadium run, which saw Williams rejoin the group for the first time since 1995, is the biggest in UK history, with over 1.8 million tickets sold. The accompanying Progress album (Polydor) was also a huge hit, selling 2,394,457 copies in the UK, according to the Official Charts Company.

Speaking in this week's issue, the pop superstar credited the support of bandmates Gary Barlow, Mark Owen, Howard Donald and Jason Orange with enabling him to ease his way back into the limelight around the turn of the decade.

“I needed a place to go and hide in public," said Williams, who releases his first festive album, The Christmas Present, on Friday (November 22). "I’d taken three years off and my body, mind and psyche had just collapsed. I didn’t know who I was, why I was, what I was doing, or what I was doing it for. And I wanted to come back because I knew at some point I’d enjoy my job, which I am now, but I needed stabilisers.

When Oasis eventually get back together in five or 10 years' time, there'll be a wry smile that they won't sell as many tickets as we did

Columbia-signed Williams, who last week announced a 2020 Las Vegas residency, also tipped his longtime rivals the Gallagher brothers to put aside their differences and reunite at some point – but predicted they'd fall short of Take That's record.

"When Oasis eventually get back together in five or 10 years’ time, there’ll be a wry smile that they won’t sell as many tickets as we did,” he said.

Williams has performed sporadically with Take That since departing for a second time in the wake of the Progress tour, including at the 2018 X Factor final, and is leaving the door open to touring together again, albeit not any time soon.

“I do see a Take That reunion in the future," said the 45-year-old. "When and where, I don’t know. I would think it would be more nearer pension age than midlife crisis age.”

Subscribers can click here to read the full Music Week interview with Williams.

The issue is available in all good UK newsagents now. To secure your copy, please email Rachael Hampton on rachael.hampton@futurenet.com. To subscribe to Music Week and never miss a music biz story, click here.