Sugar high: What next for Harry Styles after Grammys win? 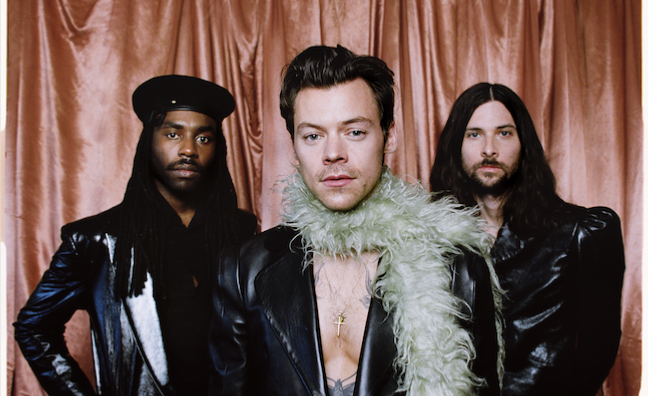 Not only is Watermelon Sugar Harry Styles’ biggest single to date, the million-selling smash has a Grammy to its name, too. Now, the question is, could it be the first of many?

In a leather suit and feather boa, Styles performed the Fine Line favourite at the Grammys last weekend, going on to thank Sony Music Group CEO Rob Stringer, Full Stop Management’s Jeffrey Azoff, co-writer Kid Harpoon and the rest of his team in his acceptance speech. Blood Orange's Dev Hynes (above, left) and Styles' friend and collaborator Mitch Rowland (right) were part of his band on the night.

The award for Best Pop Solo Performance is Styles’ first Grammy, and there’s a sense that this moment had been coming for the singer, not to mention the ubiquitous Watermelon Sugar.

There’s no doubt that the No.2 album represents a watershed moment for Styles, and Kid Harpoon – Music Week’s Songwriter Of The Year 2020 – said just that in his recent Music Week interview, which told the story of Watermelon Sugar in our Hitmakers feature.

Hull told us that “big songs” are putting Styles on another level.

“When you come from something so commercially insane, you kind of have to deliver when you go solo, and he wanted to do that on his terms,” said Hull. “There were so many easier routes to get there than the ones he took, working with weird British dudes like me. I’m so buzzing for him. His vision was, ‘Let’s make an album,’ and it really feels like an album. I go back and listen to it and I absolutely love it, but I’m also excited by what’s to come form him. He’s still growing and learning and honing his songwriting skills and being a part of that is really exciting for me.”

“Remember, the album was released in 2019, so the fact that Watermelon Sugar was No.1 in the US eight months later is pretty crazy,” he said. “Sony have done an amazing job. And it completely validates Harry’s decision to do it his way. He would have had the pick of any of the biggest songwriters in the world, they would have wanted to be involved in Harry’s album. But he was adamant that they stick to this very small team and Tom is fortunate to be right at the epicentre of that steering the ship with Harry. It’s an incredible success story really. And it’s great that it’s British as well.”

I just know he’s got more to give, which is kind of scary to be honest

There are no confirmed details of new music from Styles yet, but Hull suggested that ideas are in the pipeline.

“I just know he’s got more to give, which is kind of scary to be honest,” he said. “We’ve been doing bits and bobs, we’ve been sending voice notes and working on bits here and there, just lyrics and bits and bobs. Hopefully there’ll be something [new] at some point, I don’t really know where we are, but we’ve definitely been getting into it, we’ll see.”

Hull also revealed details of some unreleased songs the pair wrote together in Japan during a trip before the Fine Line sessions began.

“Harry was in Japan and he said, ‘Do you want to come out and write?’ and I said, ‘Why don’t I come and I’ll stay in a hotel room near you and we’ll hire a mic and some guitars and I’ll just bring my laptop,’” Hull explained. “It was a vaguely disguised lads’ trip, but we also wrote some really good songs. There’s a couple we’re still in love with. There was one that nearly made it to the record. We have a couple from there that are really special that hopefully will see the light of day at some point.”

Hull said he and Styles are “still obsessed” with the song, though he did not reveal the title.

“It’s the same as the Watermelon thing with this song,” he said. “It’s got… There’s a certain feeling in it, we’re just going to have to chip away at it and hopefully get it.”

Hull emphasised the importance of the closeness between Styles and his small group of collaborators, which includes Tyler Johnson and Mitch Rowland, adding that it led to a unique hitmaking experience.

“It was full of so many emotions of friendship, Harry feels like a brother to me, it feels deeper,” he said. “It feels like family, and the music was almost secondary to just being friends, which created a culture, an ease in the songwriting that you don’t get in a lot of other situations.”

With the BRITs approaching, all eyes are on what Harry Styles does next.