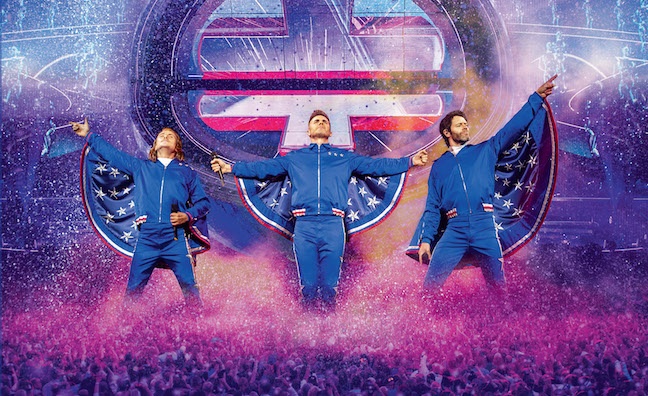 Take That have scored the biggest live music DVD sale of the year so far, according to the Official Charts Company.

Eagle Rock Entertainment’s Take That Odyssey: Greatest Hits Live secured the result with first week sales of 12,929. Released in partnership with Polydor, the bundled CD and DVD/Blu-ray release was eligible for the albums chart, where it opened at No.5.

The live DVD was filmed on the final night of Take That’s 30th anniversary tour at Cardiff’s Principality Stadium in front of a 45,000 strong crowd.

Odyssey is available on DVD, blu-ray, digital and limited edition collector’s photobook format + DVD/CD, which sold out on pre-order almost immediately. All formats include exclusive content including a fan Q&A with the band.

Take That also had a strong D2C result with last year’s Odyssey collection of reworked hits.

The new release has full retail distribution, including supermarkets. It has been supported with TV advertising, VOD, digital advertising and social media campaigns, as well as support from the band members own social media.

Hannah Tandy, senior content marketing manager, Eagle Rock Entertainment, said: “The Odyssey Greatest Hits Live tour was a very special moment in Take That’s history, celebrating their 30 year anniversary. We targeted core and casual fans through a variety of media including digital and TV advertising alongside a comprehensive social campaign, working closely with Polydor. It’s been incredibly special to work on a release from such a much-loved band, and to feel the enthusiasm Odyssey has been greeted with by Take That fans.”

Chris Dempsey, Take That manager & YMU Music board director, said: “After an incredibly successful 12 months for the band – a platinum album, a mammoth European tour and the highest grossing live music cinema broadcast – it’s pleasing to end the year on a high and for this ground-breaking show to reach even more people.”