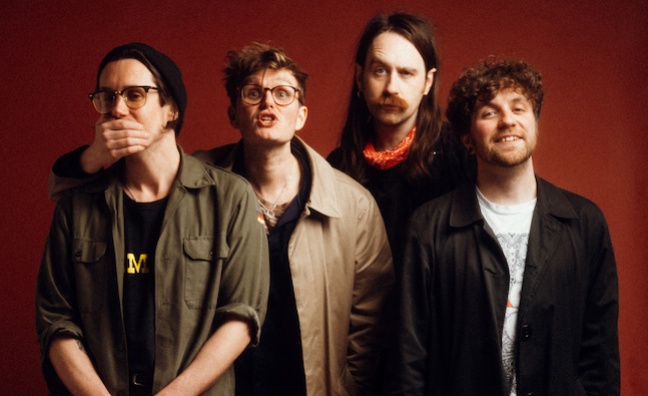 Yard Act caught almost everyone by surprise when debut album The Overload made them No.1 contenders.

The Leeds post-punk band were in hot pursuit of Years & Years last week. Ultimately, Olly Alexander finished at No.1 with Night Call.

But it was still a result beyond expectations for Yard Act, particularly as The Overload is officially the fastest-selling debut on vinyl of any band this century. It’s another strong result for Island Records, who have made a chart impact in recent years with guitar acts Sports Team, Easy Life and The Lathums.

Despite missing out on the top of the main albums chart, Yard Act did claim No.1 on the physical albums chart, the vinyl chart and the Record Store Chart.

The campaign continues with a UK tour in February, including London’s Village Underground, which is a chance for many fans to finally see the band whose first single was released at the height of the original lockdown in 2020.

Here, Island president Louis Bloom, manager Ollie Jacob of Memphis Industries, plus the PR and promotions team at They Do, share campaign insights with Music Week…

Can you describe the experience of the chart battle between Yard Act and Years & Years?

Ollie Jacob (management, Memphis Industries): “From the band and management perspective I think we've approached it as if it's both the most and least important thing in the world. I think for us, the whole thing was undercut by a recognition that for a band like Yard Act, being involved in a chart battle is ridiculous. Which ultimately meant that, in amongst the hard work and effort, we were genuinely having fun.”

Louis Bloom (president, Island Records): “Yard Act have been at the centre of everything all week, leading the charge by delivering an incredible album, doing a ton of in-stores, galvanising the fans on socials and, as Ollie says, doing it all with a genuineness and humour that is at the core of everything they do. I have to give out a huge shout out to the whole team at Island who have gone above and beyond but special shout outs to Jack Greengrass, who signed the band, and Sam Flynn whose passion, energy and love for this band has shone through from day one.”

Yard Act had the biggest physical sale of the week - how did you achieve such an impressive result?

OJ: “From the start, back in 2020 with yard act's first 7”, we've seen huge demand for their physical product, and we've nurtured strong relationships with the indies as well as seeing strong direct to fan sales, initially via Bandcamp. We had the Rough Trade Album of the month in our back pocket before we signed to Island, and they've been so supportive. But the whole indie shop community has been crucial to this campaign, from Resident to Jumbo to Assai. Not to mention the relentless drive the band have shown in putting in three to four in-store shows or signings a day.”

For a band like Yard Act, being involved in a chart battle is ridiculous

LB: “As Ollie has said, the independent retail sector really has been the backbone of the physical success of this campaign, along with a strong direct-to-fan/ecommerce strategy intricately put together by James Lee and Sam Flynn at Island with the band and Ollie. To sell over 8,000 vinyl week one is phenomenal, making it the fastest selling debut vinyl from a band this century, and is also a testament to what a brilliant and important album this is. It’s also great to see vinyl sales so buoyant!”

How have Yard Act grown so fast in terms of the fanbase?

Dan Carson (publicist, They Do): “Launching Yard Act during the first national lockdown was a challenge, but the depth of their songwriting, their message, and the genuine enthusiasm James, Ryan, Sam and Jay have for doing promo, helped Yard Act instantly cut through the noise. Their tone of voice and sense of humour immediately resonated with people. I felt the band immediately understood that each piece of press was worthwhile - no publication or an interview opportunity deemed 'too small'  - and would open the door to the next. This step by step grassroots approach would precipitate plenty of important magazine covers, including NME, DIY and So Young.

“The press and radio coverage along with the band's fantastic engagement with early fans on socials unearthed a dedicated audience and helped further stimulate tickets as lockdown ended, and later, album pre-orders. Liv [Carson] and I were able to plug news of roaring sales back into our media contacts. There was undeniable evidence that things were reacting and it all spread like wildfire from there. Before long they were being interviewed by national institutions The Times, The Guardian, The i, The Telegraph, The Metro and polling in the BBC Sound Of 2022 longlist. Ultimately though, it's the band's tireless work ethic and the quality of the debut album that led to critical acclaim in what was a busy, competitive release week for column inches. The Overload received all the top Album Of The Week accolades (The Guardian, The Sunday Times, The Telegraph), Album Of The Month in Mojo and glowing reviews in just about every other national news outlet, aiding the eventual chart battle. I already can't wait for the difficult second album.”

Liv Carson (plugger, They Do): “Introducing the band to UK radio in the height of lockdown felt a little daunting, given that most ‘alternative’ acts make their way initially on the live circuit. This was different. We knew from the off that we had an exciting campaign on our hands and made sure we did all the right things to navigate it. We saw instant reactions from key champions, the likes of Steve Lamacq at 6 Music, who was intrigued by Yard Act’s unique sound and wit.

“We built the band up through BBC Introducing and important tastemaker specialist shows with enduring support from the likes of Jack Saunders and Clara Amfo at Radio 1 and John Kennedy at Radio X. We even managed to get Peanuts - a song that has a two minute spoken work sequence in the middle - on to the playlist at 6 Music. Radio has felt particularly important in the rise of Yard Act, making them known to the world during a dark time and helping galvanise a fanbase that took them all the way to the chart battle. We are really proud of what we have achieved. This is only the start for Yard Act.”

What's the streaming support been like for Yard Act?

OJ: “I'll leave that to Island to answer in full, but we've definitely seen a huge uplift since the start of the year, and there's still huge scope to grown, in the UK and beyond.”

LB: “We have seen all the DSPs come on board to support this release and this band which is great, and it definitely feels as if the week one success will help take the band to the next level.”

What's the long-term plan for this campaign - will Yard Act's album be supported with a range of singles?

OJ: “Singles, book deals, perfumes, we're looking at anything and everything. We've obviously had huge support from 6 Music from early on, but we're planning on trying to give as many songs their moment in the sun, whether that's more traditional singles, or looking at shining a light on songs like Tall Poppies, which at over six minutes isn't exactly radio ready, but which is the kind of song that is the beating heart of what Yard Act do. Oh, and the book deal is definitely not a joke. James wrote a novel in lockdown loosely based on some of the characters that populate the Yard Act universe.”

How is the tour going and how do you see the live business growing? Are there international plans for Yard Act?

OJ: “You have to remember that our biggest headline date so far is a Lexington, so there is huge scope to grow. With all our pre-festival UK shows sold out, and a massive festival season in the works, live is going to be a huge focus for us through 2022 and beyond.

“What's really exciting is, for a band that might be perceived as too British to translate easily, the international live plot looks very promising. We dipped our toes in the water with EU city festivals last autumn, where the audience reaction was off the scale. We've got our first EU headline tour well on its way to selling out, plus an amazing line-up of key festivals across the summer and beyond. Over in the US, we're heading out to SXSW, headlining our own shows and winding up playing Coachella.”