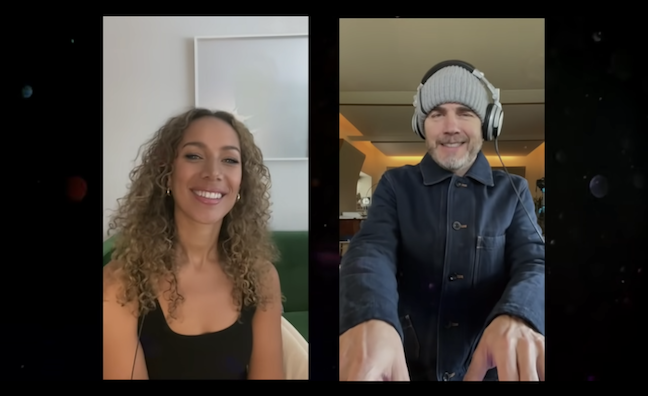 Gary Barlow has reflected on the success of his online Crooner Sessions in a new interview with Music Week.

Barlow, who wrapped up the third and possibly final series last month by performing Your Song with Elton John, came up with the idea for the video link-ups around the time of the first national lockdown in March 2020.

Gary Barlow told Music Week: “We'd been to the Liverpool-Atletico Madrid game at Anfield and, by the time we'd got back to London, people were saying, ‘It's going to be like Italy, we're going to go into lockdown’. I know who my audience is. I always did, but especially now through social media, and I thought, ‘They're going to miss this is us being on telly and doing shows, so let's give them a little treat’.

“The first time we did it was great, everyone was like, 'Yeah, let's do this'. We even did an online concert. The second one was trickier, but the third one has been the hardest because people are down this time and it's been a struggle to find the right people.”

Nonetheless, Barlow does not rule out returning for a fourth series should another lockdown materialise.

“The engagement and the way it's impacted has been great and it will be my memory of these lockdowns, so it's quite a positive memory really,” he said. “It is hard work, rounding people up, but it's worth it. Once you've made the call and a couple of texts or emails have gone back and forth, then you decide on the song and work out the key.

“It's so much more than the session everyone sees for three minutes. It's connecting with people that you've either not spoken to for six months or even a year and you've realised that we're all in the same bloody boat at the moment.”

Barlow also discussed his gold-selling fourth solo LP Music Played By Humans, which debuted at No.1 upon its release in late 2020, and offered a few words of praise for his label, Polydor.

“When you've been doing it this long, it's just relief,” he admitted. “What I always think when things are successful is, ‘Great, I can do this again’, so it's good all round. It's been an interesting one, because our label's change a lot. It's very tricky for artists when labels get new heads and new people come in, and there's a moment where you put your head around the corner and go, ‘I don't know anyone’, and labels are just so important. You think, ‘Oh, I'm signed to a big label, you're not, you're signed to about two or three people because they're the people you deal with.

“It's taken a minute for me to get used to the new Polydor, but this has been the best I've seen them in years – since David [Joseph] and Colin [Barlow] were running it and they were at their absolute height in around 2009/2010. It feels like it's getting back to that now for me, so it's exciting.”

Here, YMU Group digital content strategist Isabella Speight takes us deeper inside the development of the Crooner Sessions and reveals the dream video collaboration that is yet to come to pass...

How did the Crooner Sessions take off?

“The Crooner Sessions began back in March last year, which is just crazy to think about now because we're a year on. Every day for the next eight weeks, Gary would release a duet video with one of his friends and sometimes on a weekend he would do one with a fan as well. We paused it when we thought that lockdown was going to end, but then brought them back when it continued. We were using Gary's little black book of friends and I was also utilising the connections I have at our management company. As it started to get more popular, we had labels coming to us and requesting if Gary would like to duet with X/Y/Z, but essentially it was just Gary and his friends, so it was very authentic and I think that's what helped it become so popular.”

When did you realise the concept had legs?

“Probably quite soon after we started actually because we launched with an original song that Gary did solo and then the second one we did was with Ronan Keating. I checked the stats the next day and it was insane. Lorraine had picked up on it on Good Morning Britain and it was like, ‘OK, this is doing really, really well’ and I said to Gary, ‘How often you want to do this? Do you have the capacity and the time?’

“When we first launched it, we were doing them six days a week and then the most recent series we did three days a week. We were very consistent with the timing and that was important because it also gave people a bit of purpose in the sense of, ‘It’s 5pm – we need to head over to Gary's Facebook or Instagram and check out the new session’. But we didn't want it to be strategic, it was really about bringing people together and providing a sense of community at a time where everyone was so isolated at home – to bring a bit of joy at such a difficult time.”

What has been the most useful social media platform on which to share the videos?

“Mostly Facebook. Gary has over a million followers and - considering his demographic and the people he's doing the duets with – it fits that platform. That being said, Gary's Instagram is also very popular, as well as YouTube and Twitter, but Facebook and Instagram were probably the most popular. Gary didn't have a TikTok account when we launched, so we created one ahead of his album campaign in September and have been posting snippets of the sessions on there.”

Gary’s latest solo album reached No.1 last November and has since gone gold. Do you think the success of the Crooner Sessions played a part in that?

“I think it did, especially because the concept behind Music Played By Humans is Gary working with an orchestra and other musicians. And the Crooner Sessions built on the idea of collaboration – people coming together and creating music and uplifting people – so it was a match made in heaven.”

Which sessions have proved the most popular with the public?

“Ronan Keating, Chris Martin and obviously Lulu was a favourite because of their history together with Take That. My favourite has got to be when Gary did it with Mark [Owen] and Howard [Donald], the fanbase loved seeing the guys together. Then when Gary did the Crooner Sessions with Robbie Williams, people weren't expecting it and so that was a nice response to see. I’ve loved seeing people's reactions because there's a teaser, but it's not always clear who he's going to sing with beforehand.”

Finally, is there a Crooner Session that hasn’t happened yet that you would love to see?

“The ultimate Crooner Session would be if Gary were to do it with Mark, Howard, Robbie and Jason [Orange], I think that would be a really good one!”