MIDEM Digital Edition: Coronavirus and mental health on the agenda for virtual conference 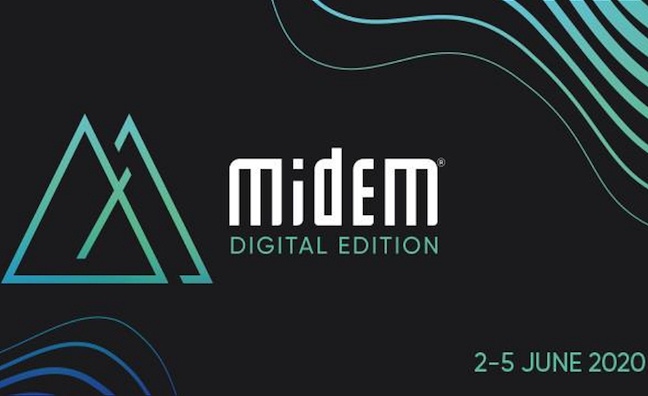 MIDEM has launched its inaugural virtual conference (June 2-5), following the cancellation of this year’s event in Cannes.

While the move was forced on MIDEM due to Covid-19, director Alexandre Deniot has told Music Week how a digital platform was part of its long-term plans to complement the event in Cannes. MIDEM will return to the city on June 1, 2020.

There was a limited line-up for the first day, which coincided with the Black Out Tuesday initiative, which Deniot addressed.

"The black members of the global community have been and will always be an integral part of the music industry, music culture and its evolution all around the world,” he said. “MIDEM stands in solidarity with you.”

How is the music industry moving out of the pandemic?

During a panel on the impact of Covid-19, IMPALA executive chair Helen Smith shared an uncomfortable truth for the music sector.

“It is one of the first affected, but it will also be one of the last that’s able to get out of the crisis,” she said.

IMPALA has been active on behalf of the independent sector. As well as calling for assistance at EU and national level, the trade body’s roadmap for recovery calls for support from collecting societies and digital platforms.

“It was really important to get a grip on what was happening across Europe,” said Smith. “We set up a task force on March 17, we were fairly fast to get off the mark, and we followed that up with a crisis plan with a set of recommendations. In the last few weeks, we’ve been looking more at recovery and how we are going to get out of confinement in a coordinated way. Otherwise it’s hard to see how artists are going to have any idea of how they are going to build cross-territory tours now.”

“As we are in regular contact with our colleagues at IFPI, many of the societies and the majors, we’re in a good place to advise the company members of the associations on what to look out for in terms of how the performance rights sector has been affected,” said Phillips.

Smith highlighted the role of music for people during the pandemic.

“Very closely related is the incredible response of the music community to really pull together and put differences aside to be able to help each other in a way that hasn’t really happened before,” added Phillips. “It’s a hugely positive thing.”

Licensing and the streaming debate

What does the pandemic mean for new licensing models and performance rights income?

Charlie Phillips echoed the warning of collections societies about the impact of Covid-19, the timing of which will vary depending on the type of income and where it’s coming from.

“It’s been great to see unlocking of past unclaimed monies that has been paid forward,” said Phillips. “But it’s really not a great story out there in terms of public performance and broadcast generally. It’s very hard to predict how much and how long they will be affected as a result of this crisis.”

There shouldn’t need to be tip jars – the rights should be licensed at a correct, fair revenue point

Phillips said that the move to webinars for gym classes was one example where licensing needs to be updated.

“There does needs to be some thinking about what’s going to be permanent, there will definitely be some business changes which will take much more advantage of web streaming technology which has never been mass mainstream before,” he said. “So there will need to be some licensing adjustments in terms of making sure that the correct rights are licensed. Licensing the use of recorded music on a web stream to individual people in their living rooms is not the same rights set as using a music player in a room in a dance class. That is going to require more thought.”

The WIN boss is worried about the revenue model from major platforms, which are being utilised during the lockdown.

“What’s of much greater concern is the traditional licensing structure through the big digital platforms, like YouTube and Facebook,” he said. “When you see the ability for platforms to put in place tip jars, there shouldn’t need to be tip jars – the rights should be licensed at a correct, fair revenue point for appropriate useage. A more focused conversation does need to be had around the sharing of revenue and the sharing of audience that’s been generated by the incredible work that’s being done by many artists, who right now are not having the best time of it.”

Smith noted that the livestream phenomenon has been compared to the arrival of Napster in terms of an absence of revenue for artists and creators.

“The sector hopes it will be properly licensed and it’s fantastic that there are new opportunities coming out of the crisis,” she said. “We need to work with the operators and make sure everything is properly licensed.”

French artist Suzanne Combo, director of the International Artist Organisation, moderated a panel with the arresting title, Can Music Make You Sick?

Keep hope alive, we can make the world the way we wanted to

“Fundamentally, I think because if you want to do music for a living, the amount of practice you have to put in to be able to do it means it suits people with obsessive tendencies,” he said. “I’ve met a lot of people in the music industry who are like that, and I am certainly one of them.”

While Rowntree said he was not diagnosed with OCD, he acknowledged obsessive tendencies when he was young.

“It did make me susceptible to treating other things in a very unhealthy way,” he said. “I did get in trouble with alcohol. The obsessive tendencies have now left, I can’t believe I ever felt that was normal.”

Despite progress in how mental health is spoken about, Rowntree suggested that there was still stigma surrounding the condition, particularly for young men.

“This isn’t a culture of asking for help with mental health issues,” he said.

After four years of training as a psychotherapist, she set up the Arts Clinic for music and other cultural industries.

Shaw identified the challenges in the industry for female artists and groups.

“Groups start when they are young,” she said. “When they mature, they become different people and they are there for different reasons. So you have to undergo those changes, and not many bands are able to do that. They split up, one goes solo or they just continue going around festivals playing their old songs. Those changes are really important to be able to examine properly and come out the right end of it. Change is always difficult to negotiate.”

“For a female artist – this is my personal take on it – it was extremely lonely, extremely isolating. Everybody’s after you for so many reasons, to exploit you in one way or another and there was nobody to turn to. This was my experience, it’s changed a lot so there are lots of other women around now. But it’s still very lonely and isolating, it’s sometimes worse being successful. Fame is very hard to negotiate some kind of illness in front of people, you can’t go and hide in the wardrobe. You are on show all the time. It’s relentless.”

Shaw expressed concern about the social media demands in the music industry.

“I absolutely could not do what young artists have to do today,” she said. “To be so self-obsessed and so out of touch with reality because you exist virtually, and so narcissistic. It’s not a healthy place to be.”

However, Shaw said there is an upside to Covid-19, which she suggested is giving musicians time to reassess their career and reconnect with people via technology. The lockdown has also been beneficial for the environment.

“It’s a great opportunity for young artists to have their say. Keep hope alive. We can make the world the way we wanted to.”

That might start with the streaming model, according to Shaw, who picked up the #BrokenRecord debate during the discussion.

“All the contracts that we have are analogue contracts, they’re not made from today,” she said. “About 10 people are making money from streaming, it should be distributed more fairly.”