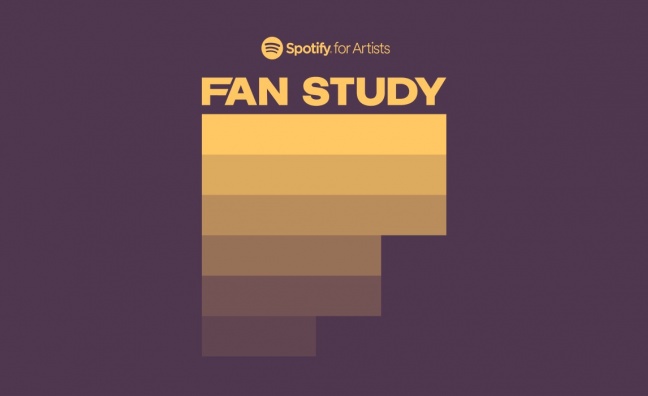 Spotify for Artists launched Fan Study last year - a collection of 15 insights about fan behaviour on Spotify and recommended actions for artists to grow their audience.

The streaming giant has now followed up with a new global edition of its Fan Study with several data-based talking points about user behaviour.

The website is available in seven languages (English, Spanish, Portuguese, Korean, Italian, German, and French). It explores how music crosses borders, how artists build fanbases outside their home market, regional trends and the strategies artists can leverage to increase their global reach.

Alongside each insight, Spotify provides artists and their teams with recommendations for how to leverage the information in order to achieve their goals - both on and off the Spotify platform.

According to the latest Spotify data, there has never been more representation from more places on the Spotify charts. In the last five years, the proportion of tracks reaching the global Weekly Top Songs chart from outside North America and Europe has more than doubled.

Working with an artist from another country - such as Central Cee’s European collaborators on his track Eurovision - can significantly broaden international reach. According to Spotify, almost 84% of streams on international collaborations come from outside the main artist’s country. That compares to under 60% for single-artist tracks.

On average, global listeners stream artists from 14 different countries every month. For listeners in Europe, that number is even higher at 16 countries per month.

There’s never been more representation from more countries on Spotify charts. Over the last five years, the proportion of tracks reaching the DSP’s global Weekly Top Songs chart from outside North America and Europe has more than doubled.

The Spotify data disabuses any acts of the notion that most new fans are always close to home. On average, 66% of new artist discoveries happen outside an artist’s home country.

When it comes to gaining new followers (as opposed to a first listen) the domestic audience is key for the early stages of an artist’s career. In the year of an artist’s first release on Spotify, the data shows that fewer than half of new followers come from abroad. On average, after five years, that number jumps to 57%.

Fans from Thailand share tracks from Spotify more than fans from any other country. With an average of 7.9 shares per listener every month, it’s more than 80% higher than the global average.

Fan Study will now be updated every quarter with new insights for music creators - read our Q&A on the first edition here.

Spotify for Artists’ offerings for artists and their teams include its playlist pitching tool, as well as Canvas, Marquee, Promo Cards, virtual event listings and educational resources.