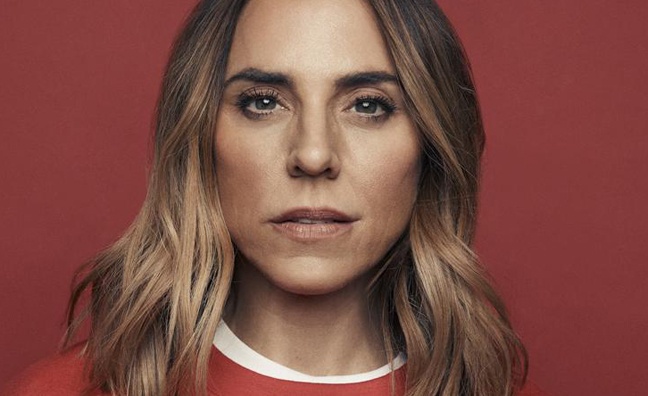 At the Women In Music Awards 2022, we celebrated the achievements of 12 game changing executives and artists as the industry came together to honour their work. Music Week has spoken to all 12 winners to tell their stories.

Here, the winner of this year's Inspirational Artist award Melanie C looks back a career that changed the music business forever...

As the winner of this year's Inspirational Artist honour (sponsored by Vevo) at the Women In Music Awards 2022, Melanie C’s career really needs no explanation.

After the Spice Girls’ iconic 1996 debut single Wannabe topped the charts in 37 countries, their debut album Spice went on to sell more than 31 million copies worldwide, becoming the best-selling album of all time by a female group. The band went on to sell more than 85 million records, releasing three studio albums, 13 singles and win a host of awards including a BRIT for Outstanding Contribution to British Music.

As a solo artist, meanwhile, Melanie has achieved over three million album sales, two No.1 singles and six Top 10 singles, including the iconic hits I Turn To You and Never Be The Same Again featuring the late Lisa ‘Left Eye’ Lopes.

In 2012, Melanie reunited with the Spice Girls for what she has described as the highlight of their career as a group – performing at the Olympic Closing Ceremony in London. Then, 2019 saw the return of the Spice Girls on their sold-out stadium tour, which served as a joyous reminder of the spell that ’90s girl power still casts on pop.

Within days of waving goodbye with three nights at Wembley, Melanie was continent-hopping on a very different, if no less glamorous tour, performing at Pride parades with the LGBTQ+ club collective Sink The Pink. From hosting a float in Sao Paulo – the first international artist ever invited to do so – and performing in New York’s Times Square for World Pride’s closing party to storming everywhere from Stockholm, Santiago, Amsterdam, London, Cologne, Berlin, Brighton, Belfast and Dublin, the tour proved pivotal to Melanie’s future.

Melanie C’s self-titled album was released on October 2nd 2020, reaching No.8 in the UK album charts, her best position for 17 years.

In September this year Melanie became a Sunday Times best-selling author, with the release of her highly anticipated autobiography, Who I Am.

Here, we speak to a true music industry icon to reflect on her globe-conquering career so far...

Congratulations on winning the Inspirational Artist award at this year’s Music Week Women In Music Awards. How does it feel?
“It's an absolute honour. You know, it's lovely to be acknowledged in this way. It's been a funny year for me because I released my memoir and that gave me an opportunity to look back over my life and my career. Like most people, we don't really tend to look back at our achievements that much, we're always striving for whatever is next. And it's been really lovely to do that. The biggest surprise to me was how much I've done, and how many wonderful opportunities that I've had. So it's very fitting to be able to celebrate that at the awards.”

Who have been inspirations to you in business and in art?
“There have been so many. It's still a very male-dominated industry, in every sector. I think it's probably as artists where females get more of a chance than at labels or even in production, studios, as engineers, musicians and all other areas of the industry. Although we're getting more opportunities there as women, I think we're still lacking. But when I look back, I think about the incredible women I've been lucky enough to work with. My mum is a singer and was in bands from the age of 14, and she had a couple of deals in the ’70s. So firstly she was my mum, but I also looked at her and thought, ‘Wow, she's so glamorous, she's so cool.’ She'd be at the house and then she’d be getting all dressed up and putting make-up on to go out and do gigs at the weekend. So that was the beginning of me idolising somebody in that position. She has such a love of music and real passion which is something that we really bond over today and understand about each other. She introduced me to Dusty Springfield, who is a big inspiration, and Annie Lennox. And then I started to discover my own music and Madonna was the artist that really made sense to me because I love to dance. I love the theatrical aspect of her shows and her attention to detail.”

Then you channelled that into your own group…
“Of course, with the Spice Girls, we were one of the first female pop acts. It was the ’90s and we were looking up to artists and bands like TLC, En Vogue and Eternal here in the UK who were much more R&B, and we wanted to do something pop. So there weren't that many female pop bands to look to, which I think was a really important part of the mission that we embarked on. We were told, ‘Girl bands don't sell.’ We were in that space which Take That, New Kids On The Block and Backstreet Boys inhabited and it was young girls screaming over boys. So it was just a really incredible opportunity that we had to be out there, doing it for the girls and creating this amazing legacy that became about inclusivity rather than just being about female empowerment.”

It’s the same for women in every industry; things improve, but it just feels like it's at a snail's pace

Some years ago, I remember seeing you backstage at a Billie Eilish concert. There was something very powerful that night about seeing young girls being utterly in awe of another young girl/woman. And it did strike me, like you say, that the Spice Girls was one of the first times we’d seen that.
“It feels quite rare, doesn't it? I think that was the night when I just felt like I had such a connection to Billie, I really understood where she was at that time. And that's been something that we've really shared, bonded and have a friendship over. But yeah, how incredible! All of the Spice Girls love so many artists now who will talk about us being very influential when they were growing up. Whether it's Adele or Ellie Goulding, Dua Lipa, Charli XCX – the list is endless, and we're so flattered and so proud. And they inspire me! I go into the studio now and am like, ‘Have you heard this Dua track? It’s amazing!’ So it's just like this whole full circle that's going on.”

You’ve been so open about issues you went through, including eating disorders and depression. Is there any advice you would share to any fellow artists who are caught in those same struggles?
“It's something that is really important to me and part of the reason that I wrote my book is because I have experienced these things, and been through a lot of pain. And if people can maybe avoid some of the pitfalls by my experiences, then that feels good. You know, it feels like it wasn't in vain. And, you know, I've spoken to Billie [Eilish] about the pressures. I often think when I speak to younger artists, they're gonna be like, ‘Oh, yeah, shut up, Grandma!’ But Billie's taking it on board and has talked about it too. And I think what's been a wonderful thing I've seen changing in the industry is – and I still think there's a way to go – that some labels and management teams are taking the mental health and physical health of their artists more seriously. There is more support now that didn't exist in the ’90s. We're seeing artists pulling shows because of their mental or physical health. You know, that wasn't an option. I had to get on with it. And I think it's just as important for the wider public, as well. I think when people are in a position of being idolised, if they can be fallible, it shows we're all human and we all do suffer at times. So if we can acknowledge that, I think it's just for the greater good.”

You’ve mentioned the industry bias towards men. What still needs to change to see more equal representation?
“Gosh, it’s the same for women in every industry; things improve, but it just feels like it's at a snail's pace. There's still a bit of a dinosaur mentality in certain areas of the music industry, there's still some of the old school thinkers about, which is kind of incredible because the industry has evolved so much – they've got some staying power! From my personal experience, I work with a lot of non-binary people so I have an incredible opportunity to see people as people and really not think about gender. But I do really acknowledge that I work with so many more writers, producers, engineers, musicians and crew that are men. I do see more and more women and I do try to seek them out. But it would be lovely if we had more opportunities for females in all areas of music.”

You must have dealt with a fair few of those dinosaurs in Spice Girls. Was it a source of frustration?
“You know, we were so lucky. And I didn't even realise until looking back. Because the five of us were so single-minded about what we wanted to achieve. A lot of men told us we couldn't do it. But for every person that said that, it just galvanised us even more. So for the five of us, the power of that belief, and the support we had for each other meant we were quite intimidating to men. It's funny, because we look back sometimes at some of the ways we behaved sometimes and we go, ‘Well, maybe we took it a bit too far’. But I feel like that's what has to be done for a change to happen. Sometimes you have to take things to the extreme. And luckily it was all tongue in cheek and we were cheeky and having a laugh as we were doing it, but we really had to go in there all guns blazing. And be fearless. Because that was the only way that we would be taken seriously.”

You're the member who has released the most solo albums of the group and have had many co-writes on No.1 singles too. What do you consider to be your finest songwriting achievement to date?
“I will have to go way back, to Northern Star, my first outing as a solo artist and the first time I was able to express myself as an individual. I love being a Spice Girl and being part of that team collaboratively is very exciting, but obviously, the way we express things collectively is very different to how you are when you're alone.

“I was able to work with the best people: Rick Nowels, Rick Rubin, William Orbit, William DeVries. Of course, it was off the back of huge success with the Spice Girls, still signed to Virgin Records, with a great recording budget, so it was beautifully produced. It felt like a really prolific time for me. I had a lifetime of experience to draw upon to get that album out there, and it was just easy and exciting. The best songs are the easy ones. We laboured over songs sometimes – the ones that just fly out are the ones that are meant to be written.”