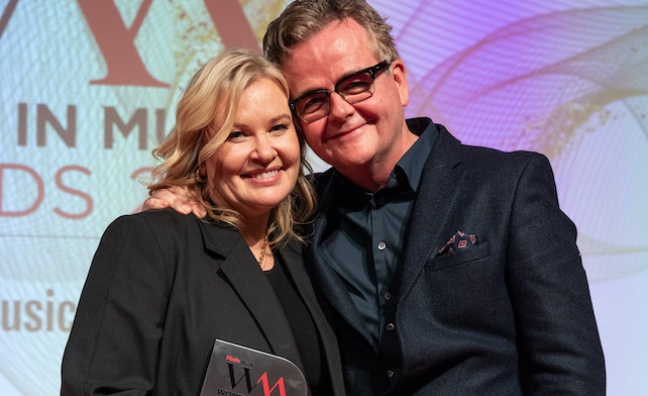 The Music Week Women In Music Awards returned for the first in-person event in two years to honour 12 incredible executives and artists.

Here, Women in Music Awards 2021 Music Creative Karen Poole (pictured with UMPG MD Mike McCormack) reflects on her career and what it means to be creative.

You’ve won this year’s Music Creative Award, what does that mean to you?

“It’s so overwhelming, you know. I feel like to win an award like this at this point in my career really is special to me so I'm just absolutely blown away. There have been a lot of challenges and ups and downs over the years and I feel really proud of myself to be here right now. There aren’t very many women in this creative space and I think I've proved something to myself to get here. You have to have a positive mindset and you have to have persistence to break down barriers and insecurities. And those come mainly from yourself, not actually from other people.”

You’re an awards judge yourself. Can you tell us about your work with the Ivor Novellos?

“I got involved with the Ivors a few years ago. At the beginning I was working on the panels and then I moved on to chairing panels. It’s brilliant because it's just so incredible to listen to other people's music. This year I’ve been judging the Ivor’s Rising Star Award with Apple and I find it really inspiring to listen to young, up-and-coming new artists.”

What was the industry like for you when you started out?

“I was in the band Alisha’s Attic with my sister. The industry was a very different place then to now - although, ironically, there's quite a few of the same people. In many ways we had a brilliant ride, because being an artist in the late '90s was a lot easier than it is now.

"These days it's much more of an individual process, you can get your sales with social media and it’s much more evolved. Back then A&R was essential and we were very much at the whim of our record company. Having said that, there was money to spend on bands. And so we had brilliant videos and we went on amazing tours. I'm just so happy that I did it. It was an incredible experience and a brilliant grounding for what I do now.”

I love the camaraderie there is between women, the we-can-do-it spirit

How did you move from being an artist to being a songwriter?

“This is going to sound like a terrible name drop, but it was down to Dave Stewart (songwriter and producer). I had a bit of a confidence wobble and I was working with friends in studios and talking about collaborating, but really I was struggling. And Dave phoned me one day and asked how it was going and I said, ‘It’s awful and I hate myself’. And he said, ‘Think about what you do really well, you could be an amazing songwriter if you’d let yourself be open to it’. Back then, music was more of an internal thing for me and I wasn’t sure if I wanted to open up that creative world.”

But, nowadays, you collaborate with a lot of artists. You’ve had a very long-running collaboration with Kylie Minogue...

“I love Kylie. To work with someone over that many years, it needs to be a friendship too. I worked with her in the early days and when she was sick and still now. It’s been an incredible run. She’s a very inspiring person and a great songwriter, which I think she doesn’t get enough credit for. Also, my natural singing voice is very like Kylie’s, so when we do demos we can sing each other’s parts. I can fill in if she needs a break.”

You’ve done a lot of work with K-pop artists. What’s the difference between the industry in South East Asia and here?

“I got into it fairly early on, through Pelle Lidell who I met when he was the publishing arm of Murlyn in Sweden. Then he went to Universal and started talking to me about K-pop in 2008. I ended up spending a few years really immersing myself in that world, focusing on what it was and how I would approach it. And I loved it so much.

"It’s a different way of working, because you are writing to a very specific brief. But at the same time you have an incredible freedom to be very experimental, they’re all about individuality and signature sounds. We write the lyrics in English, working to a theme and then sometimes some English words are kept and some are translated and I’m always fascinated to hear what changes in translation. I don’t actually speak Korean, not beyond saying hello and thank you and being able to order a glass of white wine. I’ve worked with the most incredible producers and the whole scene gives me so much energy. I think it’s great that with BTS and BlankPink that we’re really starting to embrace it here too.”

“Having Becky Hill’s Remember reminded me of how good it is when things really work. I met Becky really early on in her career and we hit it off. We wrote an incredible song called Changing which became one of her songs later on. She’s super authentic. She’s a ball-breaker which I love. And she’s just really kind. So seeing Remember working for such a big audience is pretty incredible.”

Do you take on a mentoring role for other women in the industry?

“I do, but I don’t think too deeply about it. I am genuinely interested in new talent. And I love seeing women being strong. I love the camaraderie there is between women, the we-can-do-it spirit.”

What is creativity to you?

“Creativity is honesty, it’s about coming from the right place and channelling the energy. But you do have to be tough to keep doing it, I’m very hard now, made of stone. But I also mean that in the nicest way. I’m not jaded, there are always new things that make me feel refreshed and I’m always positive.”