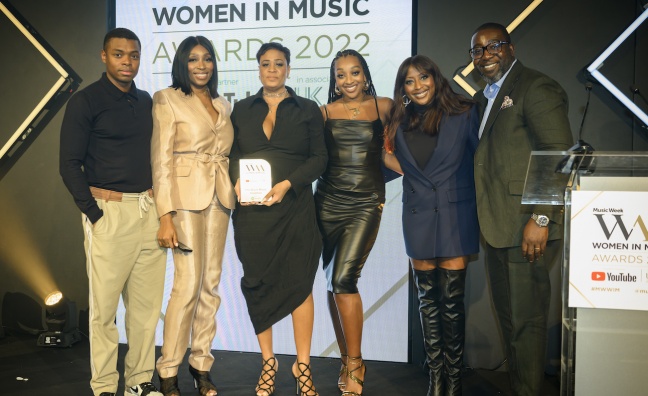 At the Women In Music Awards 2022, we celebrated the achievements of 12 game changing executives and artists as the industry came together to honour their work. Music Week has spoken to all 12 winners to tell their stories.

The Black Music Coalition is a Black-led organisation formed in 2020 when a spotlight had been cast on the issue of racism against Black people and communities. This moment led to Black execs working in the industry coming together and reflecting upon their experiences of both interpersonal and systemic racism in the music industry. The commonalities of those experiences informed the creation of the BMC and its goals.

Char Grant, Afryea Henry-Fontaine, Sheryl Nwosu (who sits as the chair of the BMC) and Komali Scott-Jones, supported by a wider committee of Black Music execs who work at all levels of the industry, have since that time taken up the mantle of continuing to push the goals of the BMC.

The BMC’s overarching goal is to eradicate systemic and structural racism in the music industry; their work so far has involved lobbying industry organisations to force change in practices and processes which continue to negatively impact Black execs, and actively working to dismantle racial barriers affecting Black professionals and creatives. Their approach is to work collaboratively on these issues.

The BMC and its members give a voice to Black execs and ensure the challenges they face are recognised, heard and ultimately removed. Here, we hear from the executive committee about their work.

As you told Music Week in our cover interview last year, the Black Music Coalition was created at a very difficult and traumatic time. What does it mean for your work to be recognised in front of the music industry at this moment?
Afryea Henry-Fontaine: “I am optimistic that [the recognition] means the music industry understands the BMC’s need for existence, that the BMC is here to stay, collaborate, and work with the industry so that we can actually achieve our goal, because it's not just about us as four Black women who are super ambitious and want this to happen. Making these changes not only has a lasting impact for Black execs, Black musicians, Black artists and Black creatives, but also for the industry as a whole. To eradicate these systems will make a huge difference to the way that companies are run, it will affect the profit margins, the experiences of staff, not just Black staff but in general across the board – there will be an incredible positive impact.”

When you consider the industry's approach to eradicating racism and discrimination since the BMC formed – for you, is it enough? What does it feel like from your perspective?
AH-F: “I think the [people at the] top are saying all the right things. But things should be coming to us as an organisation, not [us] always reaching out. If change was permeating unequivocally through these organisations, there would be a lot more incoming than there is outgoing. It has to change in the conversations that are happening in kitchens, in the cafeteria, in the formation of contracts for Black artists. It has to be more radical. It has to be more palpable than it is.”

The industry's approach to eradicating racism has to be more radical, more palpable

Komali Scott-Jones: “Until the industry recognises that racism is everybody's problem, it's going to be really difficult to measure that change. I think once companies understand that when you have a diverse workforce at all levels – not just entry level positions or middle management – it makes your workforce super diverse and also competitive, especially in the music industry where Black music is a real titan in terms of what it contributes economically and culturally. I think there's still a lot of people who are uncomfortable with that idea, and still would like to think of it as a moment, or a fad. And it really isn't. If we look to our counterparts in the States, you can see how much black music has grown over the last 30 to 40 years, and how it's contributed to these massive companies and lined pockets of all the fat cats, so it's really important for the UK to catch up and make sure they're on the right side of history in that respect.” 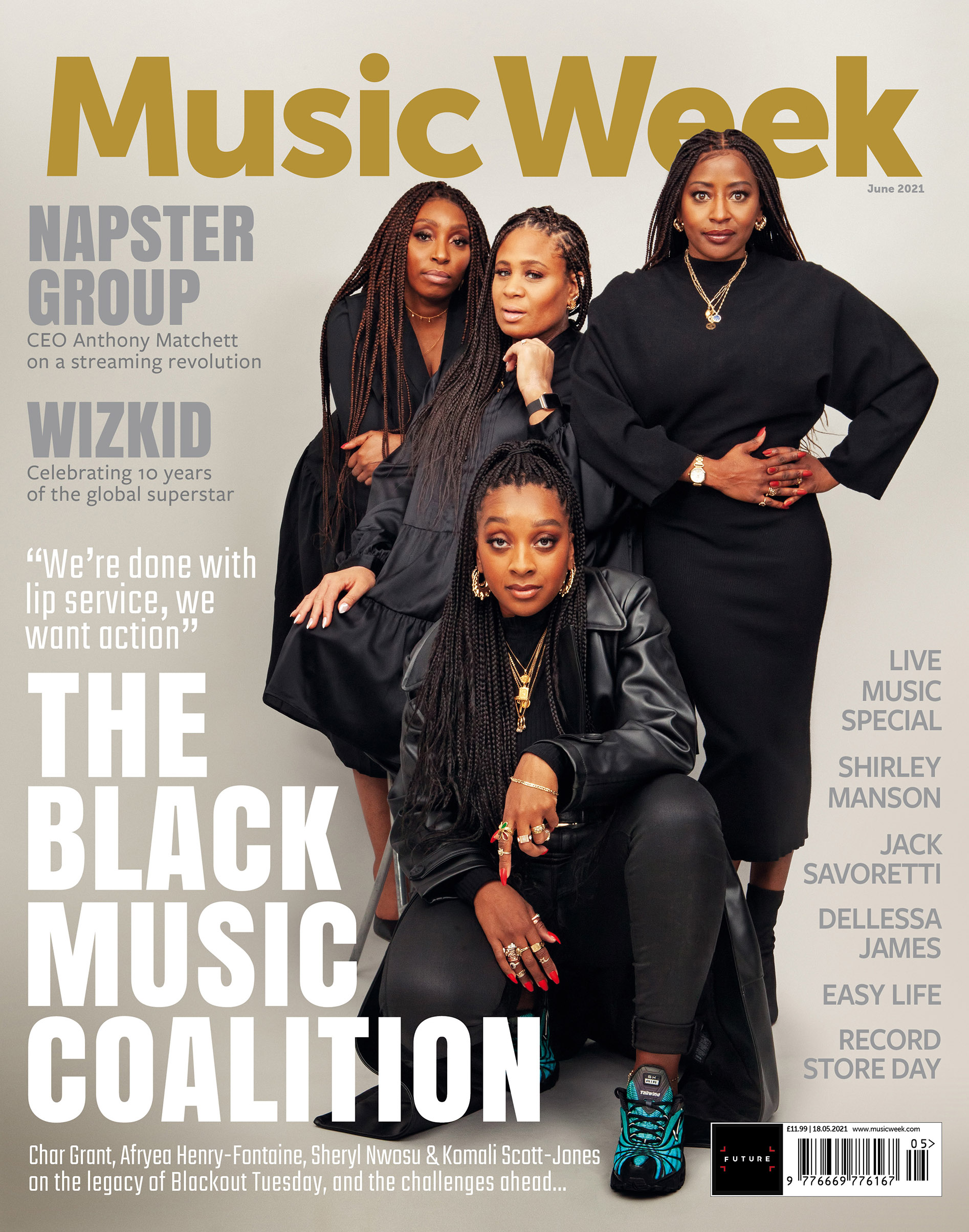 What is your message to the industry reading this, about your mission as it stands today? How can the industry collectively come together to help Black Music Coalition?
Sheryl Nwosu: “It's not necessarily about helping us. You find when there are movements such as this and people raise the spectre of racism and discrimination, that it’s often the underdog, the oppressed group, that's doing the work and the heavy lifting. Really, what 2020 should have meant is that people got their houses in order. People should have taken to task the issues of racism, how it manifests within their workplace, their structures, their procedures, within recruitment, retainment, training and opportunity of access – all of those things, that was their work to do. It cannot be and it should not be – and this is not a complaint, this is just facts – for us to keep messaging the music industry, because one has to ask the question, when you posted the black square of solidarity, which many organisations in music did, what did you mean? What do you intend to do? What were you signifying?

“Because what if the Black Music Coalition, Black Lives In Music, UK Music Diversity Taskforce [and others], what if they hadn't taken up the mantle? What if we were all just so tired, which we are, that we didn't take up this issue? Then what exactly were you [as an] organisation going to do?”

Can you tell us any lessons learned from your conversations with Black female professionals in the industry since BMC came together about the realities of working in the business?
KS-J: “There are a lot of executives, both male and female, that come to us with a variety of issues. The BMC is a safe haven for that. The problems that Black female executives face is bottoming out and being pushed out of the industry after a certain point. That full circle from being the hot young thing that they really want on their team because it looks great, it looks diverse, you're a bright young spark, to, actually, ‘you know too much,’ ‘you're too confident’ or, ‘you're too loud’. There's a lot of resistance after a certain point, which means they don't feel comfortable and feel like there's not really an upward trajectory.

“On the artist side it's also about visibility, erasure, where Black women's voices are often stifled but they're very often the voices that people lean on in the hardest times. That's super frustrating and then you can’t express that frustration because of the age-old tropes of, ‘Oh, you're being aggressive,’ or ‘You're hard to work with.’ That is the thing – the music industry is just a microcosm for the societal issues we all face in different areas of our lives, and why this work is so important and resonates. It's really important that we create spaces like these so that we can uplift women, spotlight women, talk about their successes, how they've contributed, and make sure they are on the map at all times rather than feeling like they're slipping into the mire of invisibility. That's one goal we all would love to see improve in the short term; not tokenistic hires, [but] making sure these women are being developed into the talent that they are right the way up.”

What is it like to be part of the exec committee of the BMC? What have you learned about each other? How have your relationships developed over this time?
CG: “I would say it's a complete privilege, personally. It's a part of my life now that I wouldn't change, it's something that came upon us all. I didn't come into music to become an activist. It evolved around us in a way that, at times, felt like it was taking us, but I think we always stood firm and reminded ourselves constantly of our mission and our goal. We've been privileged to have great interns along the way and have really fostered an understanding between us about how to get the best out of each other, the grace that's needed between us to make this work. We're all building lives, careers and other things, and making it work with all of that is challenging. But to see us come through some of that energy into a space of real focus and achievement, we're coming out as a strong organisation that has continued purpose. For me, it's another important string to my bow. I wear it proudly. I would rather there wasn't such a need for an organisation like ours, but here we are.”

Clearly the existence of BMC is making a huge difference to your memberships and beyond. What does the future hold for this organisation? How do you plan to continue to make an impact?
CG: “We've been quietly developing an important piece of work this year – a report card, which a lot of the industry have already contributed to by letting us know what they've been doing in the last two years to change the systemic racism issues within their organisations. We haven't got an exact date on when we will issue the report, but we're working closely with BMAC (Black Music Action Coalition), the American sister coalition, to align and make sure we have a global view. So that's going to be quite an important piece of work that will drop in the next few months.”

SN: “We’re also opening up our membership to all Black execs. That will bring together Black execs as a real community body because we do have specific needs and issues that affect both Black men and black women in the industry. By opening up membership, we effectively will want to position ourselves as the voice of Black execs and a voice that has to be spoken to when issues arise in the industry (as they often do), but also a voice that is there, is clear and that people can't ignore because execs have really helped build the infrastructure of this industry, they've been self-starting in that sense. So, the future for us is the body of Black execs across the UK, all whilst working towards our overarching aim and goal to eradicate anti-Black systemic and interpersonal racism within the music industry.”