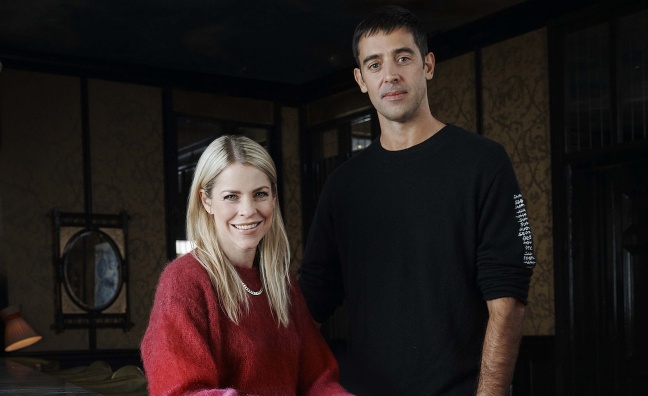 Atlantic Records co-presidents Briony Turner and Ed Howard have reflected on the label's UK streaming prowess in a new interview with Music Week.

The Warner Music UK label led the way in the domestic streaming market for UK repertoire less than 12 months old in 2022 - the fourth straight year it had come out on top. It is measured based on a rolling weekly calculation based on a 12-month window.

“Cameron [Stanton], our head of streaming, along with Georgia [Devon-Spick], our senior streaming manager, pride themselves on their relationships with our various partners," said Turner. "This, along with their commitment to detail, care for the records and constant real time communication, combined with the incredible work from the rest of the label, drives our market leading position year after year.”

“We’ve enjoyed a huge amount of domestic streaming success at Atlantic over the last few years," added Stanton. "For both our long-term artists and new signings in the UK to consistently deliver huge streaming numbers year on year, is testament to the incredible artists we work with and the endless commitment, talent and drive of so many people at the label."

The Warner Music label won Record Company Of The Year at the Music Week Awards last year, and Turner suggested its streaming success with new music is indicative of a wider culture.

"It's a sign of working with the right artists that create their own energy, and the label blowing up those records to the greatest possible extent," said Turner. "We don't release the most records by any means - we release relatively few - it's just that we have a much higher hit rate than most of our competitors thankfully, so we feel like we're over delivering.

"We try to maximise the opportunity that each release presents and leave nothing on the table. Overall, we feel like it's a great indicator of the health of every department at the label."

Here, Turner and Howard take a deeper dive into the numbers, the BRITs and the label's hopes for 2023...

What most pleased you about Atlantic UK's 2022 streaming stats?

Briony Turner: "It's the fourth year in a row that we've achieved this position, which speaks to what we're deeply passionate about as a label: developing and sustaining our artists' careers. We're making sure that each campaign is super-bespoke; there is no cookie cutter approach to anything. All artist and management teams have different needs and require different things from the label, and we try to approach all of our art in a very individual and laser-focused way. I don't think we're stats-driven people, we're success-driven."

Ed Howard: "It's a good indicator of a lot of things going well: good campaign development, a healthy broad roster, a lot of established artists who we feel we're very good at helping through the middle and later parts of their careers, hits and new signings. You need all of those things in order to maintain that altitude, as it were. We love our American label and they give us lots great repertoire, but that particular metric is down to the work that's done in the UK by our domestic A&R and the company here. We feel like that's a very important sign of health of a record label, and also as the message it sends to artists that we want to sign and work with. If you're a UK musician wanting success in the UK, there's no better place."

How have you been able to maintain those standards over the past four years?

BT: "By finding incredible talent who have incredible managers. Not having a bloated roster is important, because each campaign takes a lot of focus and individual tailoring, and we like to dig into the trenches with our artists and their managers to make sure that we're building meaningful communities. The editorial support from our DSP partners is also a big part of making these results possible."

EH: "They've been incredibly collaborative - they lean in and have tried to do things out of the box, and have added a ton of value."

What upcoming releases are you most excited about that can hopefully help build on that success?

BT: "We've got a very healthy, stacked release schedule, which is a good start. We're not resting on any laurels.  We recently signed Goddard, an artist who has had great success with Cat Burns and more recently, Venbee. He has some incredible records, so we're very excited about him in the DnB space."

EH: "And there is a good culture around him developing as well. I also want to flag KSI and Oliver Tree, who have a record coming out this week, which I think a) the record is fantastic, but b) there is this fun thing happening between them – these two internet popstar personalities that are each crazier than the other – and they are just getting started in terms of how it is going to go, and how funny and engaging it's going to be. I'm excited, as a fan, to see how it plays out content-wise in particular."

BT: "Yeah, personality driving content, driving streams. We've got another brilliant record coming from Anne-Marie off the back of of Psycho, which was fantastic. There will be lots more from Fred Again.. coming up; Tion has some banging records in the locker, and Nathan Dawe and Joel Corry [also have releases planned], to name a few."

Atlantic is leading the way at the 2023 BRIT Awards with 12 nominations, how confident are you about your chances on the night?

BT: "Who knows? Let's see on the night. I would hate to predict anything for the BRITs. But we feel super-proud, it speaks to our musical diversity and breadth of artists. We're across all of the categories and we're super-proud of everyone who's nominated and to see multiple nominations for some artists is amazing. I'm sure it will be a phenomenal night."

EH: "It was such a strong showing from our American roster, but capped a fantastic year for Burna Boy in particular, what a year he's had. Lizzo, too, has had another great year. Also you've got to give a shout to Kojey Radical, who is Mercury, MOBO and BRIT-nominated now. That's incredible and deserved off the back of amazing body of work. We're chuffed that our artists got some recognition and good luck to them on the night."

Here, Turner and Howard reflect further on the highlights of some of their biggest recent campaigns...

EH: "It's amazing to see = in the charts for more than 60 weeks, that's an incredible result in this day and age. And again, that is testament to the quality of the music that was on the album, and the way that stuck around. Those records have really continued to be streamed heavily post-release, and that's a great global story there as well. He's now five albums deep and - as we were saying before about having a balanced roster - he's the preeminent example of someone in the middle of their career, that we've managed to maintain a brilliant relationship with and deliver success in very different ways, through different platforms over the years."

BT: "He has built an incredible relationship with his fanbase through exciting, unexpected moments. He's developed an exceptional reach into fandom. We also see that in his live business, which is exceptional."

EH: "We saw his consumption triple between late summer and the end of the year. The culture comes first, and then you see this consumption explosion off the back of that."

EH: "He is a pleasure to work with, he's got so much going on. He's got this fervent culture, fanbase and activity, not all of which is musical in his case, but it fuels that excitement, which then in turn drives consumption."

BT: "She's tripled her streaming volume and has massively increased her reach across her socials via touring with Ed Sheeran on his stadium shows, and also putting out three singles in between album cycles. She's done incredible work."

EH: "Her audience has grown hugely. Overall, her streaming grew a third between albums, which coming from quite a high base is really, really impressive. She's at the start of her second album now."

BT: "It's great because Maisie hasn't come out of the market. Since the end of the first album campaign, she's three singles deep, been touring all year, and is straight back into this having done phenomenal audience development, which she's harnessed and driven herself."

BT: "He had one of the biggest rap records of the year with In For The Kill, which felt like a smart, culturally defining rap record that spoke to the culture of the original sample from La Roux and incorporating the drum & bass sonic of the Skream remix, so really smart A&R and and sample usage. And in terms of his overall position in the market, he didn't put a record out last year, but was something like the sixth biggest streaming artist in the British Black music space. So again, in relation to the quality of the A&R, the decision making around the songs and the guidance we try to offer our artists across the board, we're very proud of what the streaming figures tell you about what's going on in the background at the label."

BT: "Last Night In The Bittersweet was his third No.1 record with us. He's one of our longest-standing artists on the roster. We love him to bits and I think the headline that's really impressive is that the pre-save on the record was on a par with Charli XCX and Fred, who are much newer, more native streaming artists. The way in which we can move his audience to a new consumption platform speaks to the job that we did as a label, and also the importance that still exists around Paulo. He is without a doubt one of the best singers and artists in the country."

Ed Howard has also spoken to Music Week about the No.1 Charli XCX campaign here.