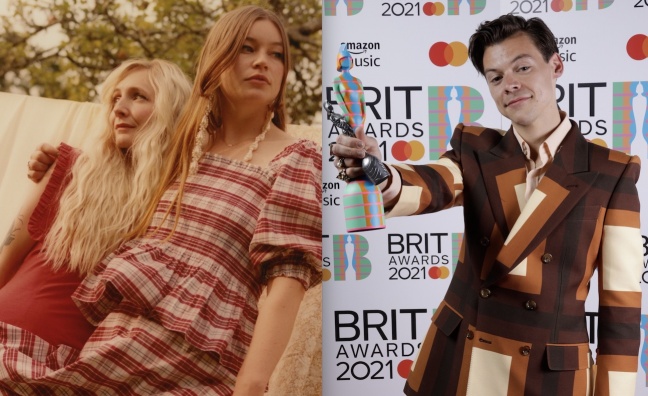 Harry Styles and Wet Leg are the frontrunners at next month’s BRIT Awards with four nominations each.

Harry Styles had a stellar 2022 with the campaign for third album Harry’s House (the year’s biggest seller), while Domino-signed independent act Wet Leg achieved a significant breakthrough with their self-titled debut.

As well as being nominated for Mastercard Album Of The Year, Harry Styles is up for Artist Of The Year, Song Of The Year for As It Was and is included in the pop/R&B genre category. Styles previously won for British Single in 2021 and British Video in 2018.

Wet Leg make the Album and Group categories, as well as being included in Best New Artist and the Rock/Alternative genre award. The genre awards go to a public vote via TikTok from January 19. Wet Leg are confirmed as performers at the ceremony, along with Sam Smith & Kim Petras.

Another rising star, electronic artist Fred Again.., makes a BRITs 2023 impact with three nominations, a feat matched this year by former BRITs winners The 1975 and Stormzy.

Cat Burns, who achieved a breakthrough with the single Go, has three nominations too (including the nod in the Rising Star category, which has been won by FLO).

In the international categories for artist, group and song, Beyonce, Taylor Swift and Lizzo each have two nominations.

The BRITs 2023 ceremony returns to The O2, where it will be staged on a Saturday night (February 11) for the first time. The ceremony will broadcast live on ITV1 and ITVX.

Market leader EMI has 10 nominations, including Taylor Swift, Lewis Capaldi, Elton John, Loyle Carner and Capitol artists Aitch and Sam Smith. Columbia has nine including four for Harry Styles and a pair for George Ezra. Domino is the highest-ranked indie with six nominations (shared between Wet Leg and Arctic Monkeys), which puts them equal with RCA.

This year will mark 30 years of ITV as broadcast partner, with headline sponsor Mastercard reaching 25 years and 13 years at The O2 arena.

GENRE CATEGORIES
EACH CATEGORY HAS FIVE NOMINEES AND IS VOTED FOR BY THE PUBLIC VIA TIKTOK. PROMOTED VIA RADIO STATIONS ON BAUER AND GLOBAL MEDIA.