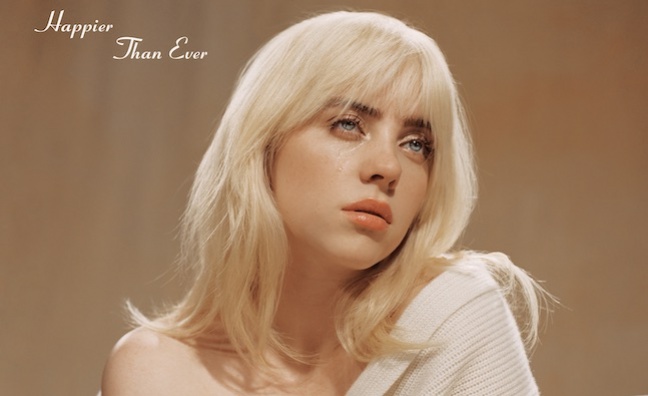 Billie Eilish is back with another blockbuster album.

Even ahead of the July 30 release date, we know from Music Week’s coverage of the campaign that Happier Than Ever (Polydor/Interscope) had racked up 20,000 pre-orders by earlier this summer. It’s also the most pre-added album ever on Apple Music with more than a million fans cueing up Eilish’s second album on the platform.

Billie Eilish could even have the biggest week one sale so far this year. Olivia Rodrigo’s Sour (Polydor/Geffen) is currently out in front with 50,942 sales (Official Charts Company) in its first week. However, Dave was on course to top that with his album, We’re All Alone In This Together (Dave Neighbourhood), which had more than 45,000 sales in the most recent Midweek sales.

Of course, Billie Eilish is a streaming phenomenon with almost 50 million monthly Spotify listeners. But she’s one of those rare artists who also moves an awful lot of physical music - in the case of her debut, 155,717 copies.

Vinyl will be key to the physical performance of Happier Than Ever. Physical editions have been released amid high security with stores only getting their allocation for July 30. For indie retail, an exclusive brown double LP has been driving pre-orders.

“It’s sold very well,” said Jon Tolley, co-owner at Banquet Records. “It’s a huge one for us, it does translate to physical buyers.

“Billie Eilish has a history of physical sales. We must have sold 2,000 copies of that first EP [Don’t Smile At Me]. She’s now one of the biggest artists in the world with a fanbase that isn't going to leave for quite some time.”

In fact, record shops could probably sell many more copies of the indie edition but for the combination of exclusivity and the available supply of LPs. Lead times and the volume of vinyl is currently affected by the available capacity at pressing plants in Europe.

“We knew that this allocation would sell out in a couple of days and it did,” said Tolley. “That’s the story of vinyl production at the moment, there’s not enough to go round. We won’t have any [of the indies edition] on the shelves for release day. That’s a sign of how in-demand it is as well as an indication of the pressing plant delays.”

Even the standard black vinyl edition of Happier Than Ever is subject to supply restrictions.

“I wish we could get more,” said Tolley. “We’ll take what we can get and sell them.”

CDs will of course be widely available, although retailers expect less demand for that format. “There are so many packages for D2C on the CD,” said Tolley.

Stephen Godfroy, co-owner at Rough Trade, said Billie Eilish will cross over to its customers.

“We work with artists both developing and established,” he told Music Week. “From Rough Trade’s perspective, there is a focus on emerging artists in particular. But that doesn’t exclude more established artists, and Billie Eilish is an artist that many of our customers will enjoy and appreciate. So it should be a key release for us.”

Following the recent store launch in New York, Godfroy is also hopeful that Eilish’s LP will be a gateway disc for new vinyl customers.

“We welcome the fact that vinyl is now a key format for artists of that stature,” he said. “So the fact that we are seen as one of the go-to vinyl retailers in the UK, and increasingly the US, that’s a very positive thing for us. If someone’s a Billie Eilish fan and shops at Rough Trade to make their purchase, then it opens up the wider world of the rest of our offer.”

Resident Music’s Jamie Buckingham agrees that Billie Eilish is a “great example of an artist who traverses the major and indie worlds”.

“The best thing about her music is that it's fun,” he said. “It brings people who might not usually visit record shops through our doors and hopefully allows them to discover new music. We look forward to bumping this one through the speakers loud and proud on Friday.”

Although the three singles released by Billie Eilish ahead of the album have not been radio hits, Tolley is confident that the album will perform strongly with record buyers.

“It's not manufactured pop,” he said. “She may well cross over to the pop world now but [the music] is crafted and introspective. For a teenage girl, particularly, if someone is talking your language and looks and sounds like you, there is a natural affinity there which people sign up to.”