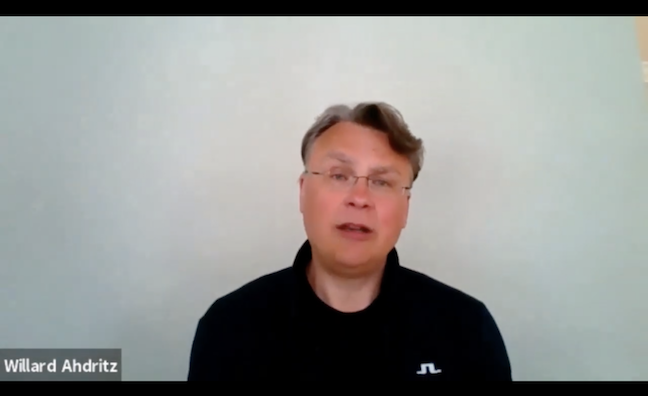 Kobalt founder and chairman Willard Ahdritz was the big keynote speaker for the second day of MIDEM’s Digital Edition.

In a remote session entitled The New Normal, Ahdritz addressed the impact of Covid-19 on the industry. It was a subject that came up on the first day of the inaugural virtual conference, which replaces this year’s event in Cannes.

Kobalt was among the companies supporting the Black Out Tuesday initiative, though this keynote was pre-recorded before that took place.

Ahdritz stressed that Kobalt is still working on behalf of its 40,000 creators. It has a 700-strong team from 16 offices globally working from home.

“We have an organisation to take care of,” said Ahdritz. “We feel sad for all the suffering we see everywhere, not just in the music industry. It is a tough time for a lot of people. Being a tech company, we closed Kobalt on March 10, all employees have a laptop, we are all used to working remotely. After a week, our productivity went up in how we work.

“There’s a great spirit at Kobalt, and the mission we are on, being able to support our creators and making sure that in these times our distributions and what we do are even more important for the creators that we work with. I am obviously concerned about the bigger picture. At Kobalt, we stay humble and work on, take week for week what we see in the different territories around the world and what we need to do.”

With music publishers and collection societies recently describing the likely effect, Ahdritz is the latest big player to speak out on the business impact of the pandemic.

“If you have a bigger sync business with big hits, we all know that major film and TV companies are not producing as they did before,” he said. “So we see a bigger impact on sync.

“We know that [also affected is] live, which in certain territories in Europe is a good income for publishers too. We all know that the performance fees from restaurants and bars have really been suffering. Most people pay out six months or 12 months later what they have collected, so we see this being drawn out.

“But overall, I think we can say that if we are minus 10% this year, we believe that will be plus 20% next year, that people are bouncing back. We see certain productions starting again around the world. We are lucky in publishing and our recordings [business], AWAL, we see it as very much business as usual. It’s very much a digital streaming label and we are working marketing remotely on that side. Overall, we are doing very well.”

Don’t worry, the genie is out of the bottle when it comes to global music and streaming

With artists already releasing lockdown albums, Ahdritz suggested it could be a productive time.

“What is exciting is that we have a lot of songs, so creatives have continued to create even more,” he said. “I believe we are going to see, later in the year or next year, some fantastic songs and fantastic music that is now being written. People start to get creative when it comes to recording new material and working together again. Overall, I am positive despite the situation we are in.

“The home studio revolution has gone on for some time. The most famous album last year, the Billie Eilish album, was mostly recorded with Finneas at home. So quality and great music can be done in those environments.”

While physical sales have been hit, along with performance income from live and sync, Ahdritz said that streaming ensured that long-term growth is assured.

“Don’t worry, the genie is out of the bottle when it comes to global music and streaming,” he said. “Overall, I do believe that publishing in the short term will be negative [growth] this year rather than 3% growth, just because sync will be hurt if you have a big sync business. The live performance will affect this and also the restaurants and bars. Having said that, I think we’re going to bounce back and have 20% growth next year in publishing overall.”

A Goldman Sachs report on music recently suggested a dip in 2020 followed by a return to resilient growth.

“On recordings, I’m actually more encouraged than the Goldman report,” said Ahdritz. “I think they are too conservative. The business has grown so much online with streaming, so I think we are going to see bigger growth than they are [forecasting] on that point.”

“Having met his adviser and lawyer… they were very happy and we delivered what we told them we would do,” said Ahdritz. “What I say is Kobalt is a smart people’s platform. Clients recommend clients, it’s word of mouth – up to half of our clients have been recommended by someone they trust or work with.

“It’s very humbling that I think Max Martin and Paul McCartney are competing for who has had most [US Hot 100] No.1s, and we are servicing them both and they are recommending us. That fills us with pride.”

Kobalt is nominated in the Publisher Of The Year category at the Music Week Awards.